We’ve covered Project Dream’s Dreamcast 2 campaign before, and while some people might be pessimistic on whether they’ll succeed, this latest video showing off what the Dreamcast 2’s user interface could look like has us salivating.

‎Shane De Lumeau, is the Project Dream experience lead, and has just uploaded the above video showing how he imagines the Dreamcast 2’s interface could function. It’s all there, a revamped Dreamcast swirl with a tone reminiscent of the original, yet sounds almost sonar-like. We dig it.

“We know everyone has been chomping at the bit for any sort of updates,” he wrote on the group’s Facebook page. “While it’s difficult to share final designs that will be going to Sega along with our hardware and proposal, we wanted to share an early stage prototype we did for the Dreamcast UI. You caught a glimpse of this in the video we have on the website. We have since moved on from this design to something more unique for Sega that has different functionality and utilizes new user patterns.”

De Lumeau said he does UX/UI design professionally and has worked for clients such Microsoft, Amazon and the US Army before.

Checking out the interface

After you sign in, you’re greeted to the Dreamcast 2’s dashboard, where on the bottom, you can see six sections – Home, Games, Store, Apps, Social and Settings. On the upper-right, your avatar and user name are displayed along with a number next to some Sonic rings. We assume this is a Gamer Score.

Resting in the middle and slightly to the right are icons for several games, with the top game being Yakuza 5, which is showcased with a background wallpaper. You’re able to press the “A button” to immediately play the game or press the “X button” to get more details. Scrolling down to Shenmue III or Fighting Climax Ignition, you get the option to buy the game with a press of the “A button.”

Scrolling to the next page brings you to the Game page, where you can see icons for, what we assume are, the last three games you played and another to see your game library.

The next page is the game store, which looks both sleek and simplistic. There are three main images with games you can purchase, and sitting next to those are icons to browse more games or search for a particular game.

On the App page, there are the usual suspects, like Netflix, Hulu, Spotify and YouTube, which we’d certainly love to have, but there’s also a SEGA/Net icon. Maybe that’s where you could purchase or rent content directly from SEGA, much like you can with the PlayStation 4 or Xbox One.

Scrolling to the next page is where you’ll find the Social page and can see your friend’s latest activities, including the last game they played, badges they’ve earned or achievements they’ve unlocked in games. There’s also icons for “My Friends,” “Find Friends,” “Achievements,” “Messages” and even a Twitch icon.

Overall, we really like what De Lumeau has done and think it’d be a great match if a Dreamcast 2 was ever made. 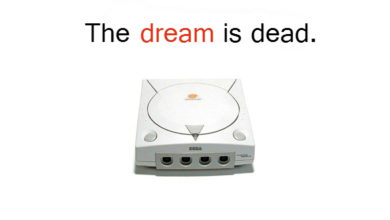 Project Dream, the group behind Dreamcast 2, shuts down 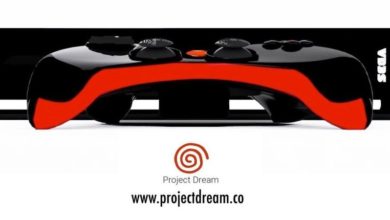 Project Dream has gotten a “mildly inviting response” from SEGA