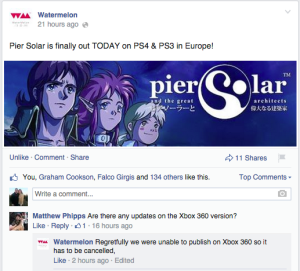 [Update: It appears Watermelon actually announced the cancellation of Pier Solar HD’s Xbox 360 port in late July in a blog post on their website.

“As most of you are aware, we haven’t been able to reach an agreement to get the Xbox 360 version published, and it’s making it impossible to be released. So we sent a survey to all 360 backers giving the option to switch to another platform. If you’re a 360 backer, check your email. It’s probably there.”]

Earlier yesterday, Watermelon announced Pier Solar HD would was now available on the PlayStation 3 and 4 in Europe. That’s all well and good, but when someone asked about the status of the Xbox 360 version, Watermelon responded with a surprising answer.

“Regretfully we were unable to publish on Xbox 360 so it has to be cancelled,” the comment read.

No additional information was given as to why the Xbox 360 version has been cancelled, but we’ve reached out to Watermelon and will update this story if and when we get clarification.

This latest turn is just another part of Watermelon’s and Pier Solar HD’s troublesome story with Microsoft. Almost a year ago to the day, Watermelon’s Tulio Goncalves told us the Xbox 360 port would be cancelled because Microsoft wouldn’t respond to developer application’s his studio sent. However, days after we published the story, Microsoft got in contact with Watermelon and the game was back on track.

Then, months later, Watermelon submitted the final build to Microsoft for certification, and it failed, which caused further delays to the game. It’s unfortunate that Xbox 360 owners won’t be able to enjoy Pier Solar HD, but the game is available on just about every other platform imaginable, so you should be able to play it rather easily.

The next Pier Solar HD port is the Dreamcast version, and Watermelon hasn’t given a firm release date as of yet.