I’m sure Tommy Lasorda is a great name in the world of baseball, but his video game certainly won’t go down in the annals of video game history as one of the greats.

[dropcap]B[/dropcap]eing an ignorant Brit, I have had almost no contact with baseball, outside of TV or movies, such watching the charming A League of Their Own, starring Tom Hanks, Geena Davis and err … Madonna. Oh and of course the classic documentary from the creators of South Park, BaseKetball.

I’ve never seen the sport played properly in real life or on TV. While I’m not against the idea of watching a game, it’s never really cropped up in my life. In the UK, baseball is a very minor sport.

Anyway, as for baseball video games … I’ve played a bit of the baseball mini-game on the original Wii Sports, for all of five minutes. Oh, and I watched with intrigue as a young lad when the kid from The Wonder Years played that baseball game on a non-descript video game system at the start of The Princess Bride. Man, that’s a good movie – after I’m finished writing this review, I’m totally going to watch it.

Sorry, this intro is starting to get out of hand. Basically, my point is that I have had almost no contact or vested interest in baseball – so it is with some trepidation that I attempt to play and review my first proper baseball video game: Tommy Lasorda Baseball.

It’s a strange feeling, not knowing anything about a sport that is, by all accounts, hugely popular, with multiple video games and movies devoted to it, such as the very humorous The Benchwarmers.

So, as soon as I booted up the game, I was greeted with this smiling chappie (see featured image at the top of the page), and my first thought was, “Who the smeg is this guy, and why does he have a video game name after him?”

But that’s not so important as the second thought that ran through my head, “How the funk do you actually play baseball?!”

The closest I’ve ever played to baseball is playing ‘rounders’ at school over here… essentially it’s a bit like baseball, but with a smaller bat, smaller diamond/pitch and it’s for kids.

The reason why I’m explaining my lack of knowledge for this beloved sport, is because it put me a real disadvantage, even when starting the game.

Keeping things simple, I opted for the first choice, U.S. East and then, looking down the surprisingly short list of teams (I thought there would be more teams in the league), I opted for Baltimore – simply because our Editor in Chief, Chris, lives (or used to live) there. 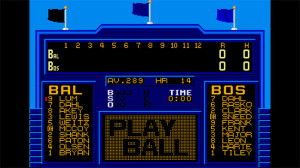 After a couple more screens that I didn’t really understand, I was suddenly in a game. I tell you what, I freaking hate tutorials in modern games, where you are forced to repeat the same smegging controls that every game seems to have, but when you have genuinely never played a genre of game and don’t really understand the subject matter, then those tutorials suddenly seem like the most brilliant of ideas!

Firstly, I didn’t know the controls. There is no option menu at all, so it was a case of guessing as I played, which is fine for most games – but when you’re engaged in a turn-based game like this, every mistake I made gave an upper hand to the CPU team.

And even when I worked out the controls, well I just ended up sucking! Trying to time the swing of your bat after the pitch was pretty tricky. After about an hour playing the game, I think the best hit tally I got was about four in a row – and none of them were particularly impressive; most of the balls I hit didn’t go very far or were instantly caught by the fielders – as if the ball targeted them and just fell into their hands.

But when it was my turn to pitch, bloody hell, the CPU player was hitting homeruns, getting the ball really far into the field and each time the ball went nowhere near my players, so I was left scrambling around trying to pick up the ball and throw it back.

We’re all pink on the inside 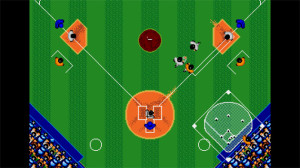 And this is where I found that Tommy Lasorda Baseball really wasn’t the game to encourage me to want to like or even play baseball.

But when I was slower in grabbing the ball and was throwing back to a base, even though the other player had safely reached the base, my players threw perfectly. It was so infuriating.

And when the other team hit the ball, it felt like the computer didn’t know which player I should have control over. Firstly, the pitcher would be the one I was still in control of, causing him to run out to the field, and suddenly, control would switch to another random player, and I would need to work out who it was in a split second because I would often be pressing up on the control pad, when the player I took control of was running down screen – meaning that I would suddenly be telling that player to now run up screen, even though his initial position placed him above where the ball landed, so I would have to quickly press down (if that makes any sense?). 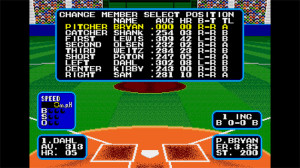 Actually, pitching the ball wasn’t much better either. You have a limited amount of control on where to throw the ball, but it was hard to try and catch the batter out. Occasionally I got lucky and got them to strike out, but more often not, when I tried to be clever and throw at an angle, I would pitch a foul ball, or they would just smack it and get a home run.

It’s annoying, even when I understood the controls and understood more of the rules of baseball, I just found myself struggling with twitchy controls and slow responses from button presses.

Another reason why I’m not sold on baseball from this game is because of how damn long the games seem to take! I was playing for a good hour and I hadn’t even finished my first game – it just kept going on and on, and it was especially annoying as I was doing so damn poorly – it was like sitting next to a bully in class at school, with them picking on you every minute and then discovering that school lasts for 24 hours and he’s in every class with you.

Aside from the controls, the music hasn’t held up too well either. The game seems to feature just a few very repetitive, piece of music. It’s fine, but because the gameplay goes on for so damn smegging long, I found myself needing to turn the volume down on the TV (because there’s no options to do so in game).

Visually, though, the game is fine. OK, you won’t be blown away, and the graphics look really dated and basic now, but they are completely fine for the game’s era and don’t look like a mess on screen; you can easily tell what everything is and what players are meant to be.

Despite my general dislike for the game, Tommy Lasorda Baseball does have some really nice touches to it.

For example, when you are about to pitch you have small windows in the corners which show the movements of the oppositions player who are already stationed on bases and you can see them inch away from the base. Before you pitch you can manually stop the throw and switch to throwing out to one of the bases, to catch one of these players out.

Annoyingly though, the game needs to switch camera angles and because of the seemingly delayed reactions I was experiencing with the controls, I was never able to catch any of them off guard (they always moved back just in time). But it was a pretty cool feature.

Also when in the batting position (not sure there’s a technical term there), you can adjust your position to try and get different hits on the balls that are pitched. This can lead to the ball getting significant height and distance on them and, once the ball is hit, the camera changes to an overhead view. Depending on the angle the ball is stuck at, you do see a pretty decent animation of the ball flying high in the air- again though, the visuals here are no amazing, but I feel for its time it was a pretty cool thing to see and it certainly keeps the gameplay a bit more interesting.

Perhaps I wasn’t the best choice to review a baseball game, seeing as I know almost nothing about the sport, but then again, maybe I was the perfect choice, because of that!

Because of my lack of baseball knowledge, it was a whole new experience for me. I had to learn how to actually play the game and appreciate it from a completely fresh perspective. Also I had no other baseball games to really compare it to – so my judgement was not affected for bias towards another game; Tommy Lasorda Baseball is, technically, the best baseball game I’ve ever played … it’s just a pity that I did not enjoy the experience.

Taking aside my ignorance for the sport, Tommy Lasorda’s Baseball is let down by some very twitchy controls and slow inputs from the controller. Getting timing on hitting the ball just right was a pain in the arse and when trying to throw the ball back to a base, when playing in the field, became infuriating at times because it didn’t always go where you wanted it to – even if you were pressing the right directions.

Also, while I understand that during a real life baseball game, the atmosphere in the stadium can be electric and the action between plays can be enjoyable for all concerned, I found that playing this game was more like a chore than anything else. Pitching the ball was tedious, especially when you can’t control your fielders properly and batting was more of lottery as to whether you could effectively hit the ball properly.

I’m sure Tommy Lasorda is a great name in the world of baseball, but his video game certainly won’t go down in the annals of video game history as one of the greats.

Pros:
+ Tommy has a wonderfully cheeky, digital smile
+ Some nice touches during gameplay, like seeing players move away from bases.
+ Feels good when you actually hit the ball!
+ Visuals, while not great have held up reasonably well 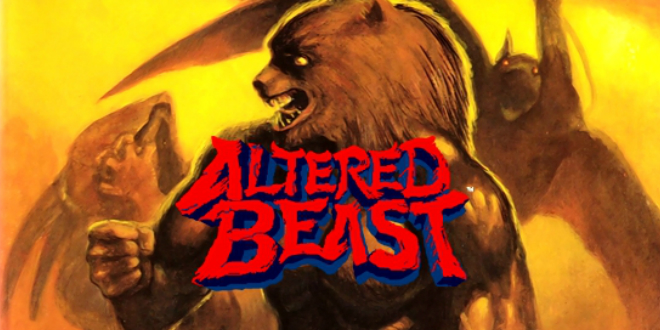 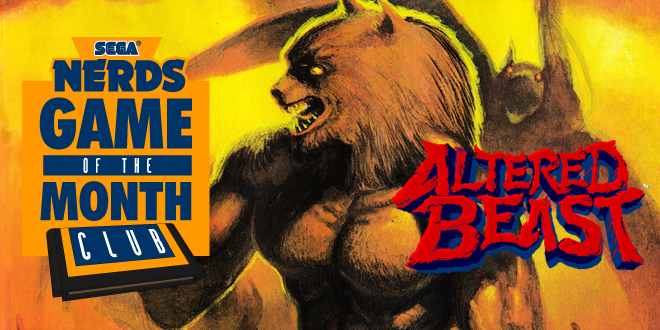 Altered Beast is August’s Game of the Month