The SEGA Sammy Company has recently announced a major change in shareholders.

Current Chairman and CEO, Hajime Satomi, will no longer be the major shareholder of SEGA Sammy. Instead it will go to his family company, HS Company. Below is a table showing the change in shares from each respective company and person. 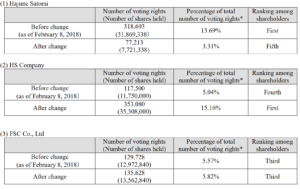 Hajime Satomi has now become the fifth major shareholder of the company with 7.72 million shares while HS Company has jumped from fourth to first with 35.3 million shares.

The change in shares is because of SEGA Sammy’s recent slump in sales. As stated, SEGA’s mobile division and Sammy’s pachinko business have been under performing and the company has been losing money drastically. SEGA Sammy stated that the management structure and business performance will not be affected with the change of shareholders.