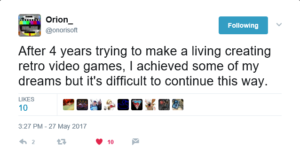 Sad news SEGA Nerds. France-based indie retro developer, Orion, announced on Twitter that he would no longer be making games on a professional level and would just do it as a “casual hobby” going forward.

Across two tweets he commented: 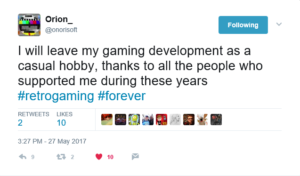 “After 4 years trying to make a living creating retro video games, I achieved some of my dreams but it’s difficult to continue this way.

“I will leave my gaming development as a casual hobby, thanks to all the people who supported me during these years #retrogaming #forever“

Orion perhaps isn’t the biggest or best-known indie developer, but he has made some pretty decent games for both the Dreamcast and Mega Drive/Genesis, as well as games for the GameBoy, PS1 and even Atari Jaguar – and it’s always sad to see any developer still making titles for our favourite SEGA systems being forced to step down.

We reached out to Orion for further comment on exactly why he decided to leave and what it means for the games he has already made, he explained:

“My games are still for sale, but I don’t sell enough to make a living from it.”

There you are. It’s a pretty simple explanation, like many indie developers Orion has been trying to make a living from the games he makes – but it looks like the sales and support just isn’t there. But if sales were to suddenly pick up, it looks like Orion would be open to continuing game development full time, as he added:

“…maybe I can continue creating games for our lovely consoles :)”

One of the good things about Orion (over some indie devs) is that he makes a variety of games, not just sticking to one genre. He’s brought platformers, a point ‘n click adventure, puzzles games and even an RPG to the Dreamcast. I’m particularly interested to get my hands on his latest/last game, released earlier this year Escape 2042: The Truth Defenders (see video above) which is available on both the Dreamcast and Mega Drive. 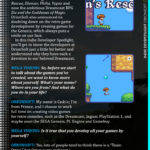 It’s especially sad for us, as our sister publication, Mega Visions Magazine, interviewed Orion in issue #1.

If you’d like to show your support for Orion and the Dreamcast indie dev community, or are just interested in seeing more of what Orion has developed, you can find his games and some demos on his website, follow these links for his Dreamcast games and/or Mega Drive/Genesis Games.

June 7, 2018
Check Also
Close
FOLLOW US
Use code SEGA at checkout to get 30% off EwinRacing gaming chairs