Jurassic Park: Rampage Edition has some interesting ideas, but some odd design choices plus stages that are simply too long bog down what could have been a more refined game.

The first Jurassic Park game became a huge success on the Genesis, and SEGA quickly tried to recapture that success. Not content with waiting for a true movie sequel, Jurassic Park: Rampage Edition is a “what if” type of story which takes place in an alternate timeline picking up immediately after the events of the first film. Rampage Edition is therefore a 100% new game, a sequel to the original, not a upgrade or expanded remake, which the title might suggest.

Developed by Blue Sky Software, the same team who developed the original game, Rampage Edition reintroduces many familiar mechanics but mixes in several new and interesting ideas to the prehistoric mix.

Is it a glorious adventure 65 million years in the making, or is it “one big pile of sh*t?”

“Eventually you do plan to have dinosaurs on your dinosaur tour?” 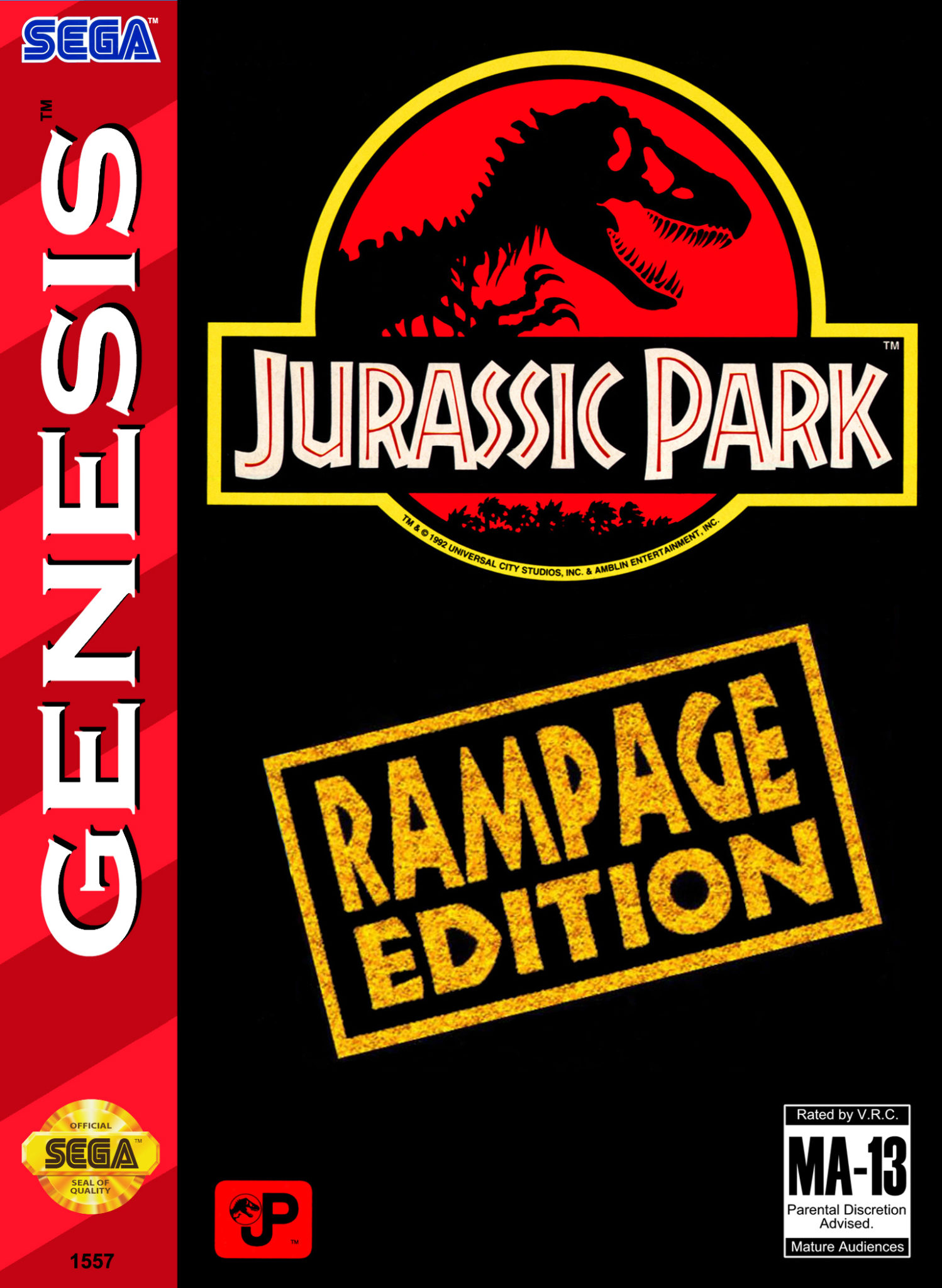 Following from its predecessor, Rampage Edition once again allows you to play as both Dr. Alan Grant and a deadly Velociraptor.

Playing as Dr. Grant, the first thing you may notice about Rampage Edition is that you aren’t alone among the beasts on Isla Nublar. Possibly the most dangerous enemies Dr. Grant faces are humans armed to the teeth and ready to blast you back to the Cretaceous without the slightest provocation.

Yeah. The plot justification for this odd turn of events is thus: while escaping from Isla Nublar, Dr. Grant glances back from his helicopter to see Costa Rican soliders and armed InGen field agents landing on the island. Naturally, Dr. Grant correctly assumes that their purpose is to capture the dinosaurs and to exploit their savage inclinations for a military purpose. Jesus Christ, sound familiar?

Dr. Grant has no choice but to turn back to the island to stop them single-handedly. This is no small task, as naturally these well-equipped soldiers will naturally lob every manner of death in their arsenal at you on sight. Oh, and there are still dinosaurs everywhere trying to eat you… you delicious man-candy, you…

Fortunately, Dr. Grant has access to all manner of tranqulizer darts, grenades, guns, and even rocket launchers. All your weapons make up quite an impressive aresenal, and they also make Rampage Edition a bit more like a standard action game than the original, which had hints of survival horror.

“I know how to read a schematic!”

Jurassic Park: Rampage Edition operates like a standard platforming action game. Dr. Grant will traverse five large stages (six, if you count the final boss stage as a separate stage), dodge and kill rabid dinosaurs (and soldiers), and collect dino embryos scattered nonsensically across the island. These stages are built around very interesting mechanics, some of which return from the first game (the inflatable raft), while others are completely new (riding on the back of a Gallimimus). Often these ideas work really well, but occasionally they can be infuriating.

In the very first stage, you’ll be confronted with the annoyance of swarming Pteranadons fly at the ready to snag you and carry you back up to the very beginning of the stage. Over… and over again. Rampage Edition is already hard enough as many games of the era were, but moments make the large size of the stages a detriment to enjoying the game rather than a benefit, and can make the game rather repetitive as well.

In fact, a few of the stages are so sprawling that occasionally you can get completely lost. There were even two moments, once on the temple stage and again on the freighter stage, where I was actually stuck, as in, stuck without any way to move forward or backtrack. Luckily for me, I had very little life and enough grenades on hand to kill myself, otherwise I would have been forced to reset the game.

Before moving to the raptor side of the game, there is one glaring omission from Dr. Grant’s stages. Remember how I mentioned above how the original game was seemingly a survival horror game? A really big part of that was the ever-present Tyrannosaurus Rex, who relentlessly pursued you throughout the game somewhat like Nemesis from Resident Evil 3. Well, the T-Rex is virtually a no-show, only showing up (20 years later spoilers) in the last stage as the final boss. That’s f*cking lame.

“They should all be destroyed!”

The Velociraptor returns, and like Dr. Grant, she has a few extra tricks up her scaly sleeve. She can still bite, whip her tail, and jump like a flea spliced with west African tree frog DNA, but she can also do a drop kick and, yes, a Sonic the hedgehog style spin jump executed by pressing the jump button mid-air. It’s a pretty funny visual, but the attack is pretty effective. It’s the best way to attack slyly placed enemies on platforms above you, and on the savannah stage (which is my personal favorite), it’s pretty much the only way to counter the attacking helicopters overhead. Sonic-raptor, meet Robotnik-copter.

As the raptor, you play the same five stages as Dr. Grant, but in a different order. There aren’t quite as many gameplay innovations as in Dr. Grant’s game but there is a new added feature of “raptor rage” mode, where if you collect enough lysine, the screen turns red and your raptor becomes invincible and many enemies die immediately upon touching them.  Overall, even your basic speed and agility makes leaping through the stages fun, so playing as the raptor is still a hell of a hoot.

The aesthetics of Rampage Edition are a bit improved over the first game. The characters each have a dark outline around them this time around, making them a bit more distinct from the backgrounds. It feels more polished than the first game with fewer bugs, the animations are still very smooth, and there is less slowdown.

The music in Jurassic Park: Rampage Edition is adequate for setting a creepy mood, but you aren’t likely to go track down a soundtrack CD. It combines some interesting lower bass tones and samples of growling dinosaurs, so it is at least unique.

“I’ve decided not to endorse your park.”

Jurassic Park: Rampage Edition fixes several of the issues that plagued the first game and adds in some interesting ideas. Plus, having the ability to play the game with two completely different characters adds some great replay. However, some very odd design choices plus several stages that are simply too long for their own good bog down what could have been a better, more refined game.

If you’re a fan of Jurassic Park (like I am), you will absolutely find some things to enjoy. If you’re not a fan of the series, I can’t recommend that you pay very much or go out of your way to pick up the game.

Maybe they’ll have a coupon day, or something…

– Overly long, repetitive stages
– Easy to get lost or stuck
– Frustratingly hard
– Where the hell is the T-Rex?