M2 has knocked it out of the park yet again, taking what was originally a very flawed game and transforming it into a vibrant, old-school classic.

Opa-Opa has once again taken flight in 3D Fantasy Zone II: the Tears of Opa-Opa, which finally hit the Nintendo 3DS eShop last week. As part of M2’s highly-regarded line of SEGA 3D Classics, 3D Fantasy Zone II was rebuilt from the ground up, including unlockable options, extra modes, and of course, stereoscopic 3D effects courtesy of the 3DS hardware.

For those unfamiliar with the series, Fantasy Zone II was direct-to-console sequel of the arcade original, though M2 remade the game in on PS2 in 2007 as part of the SEGA Ages line. M2 used that remastered version, Fantasy Zone II DX, as the basis for this 3DS version rather than the original SEGA Master System release. If you’re an American gamer who only played Fantasy Zone II on Master System, some aspects of the game may seem unfamiliar, but trust me, the changes were almost all for the better. (Especially dropping that brutal Master System music! Yikes!)* 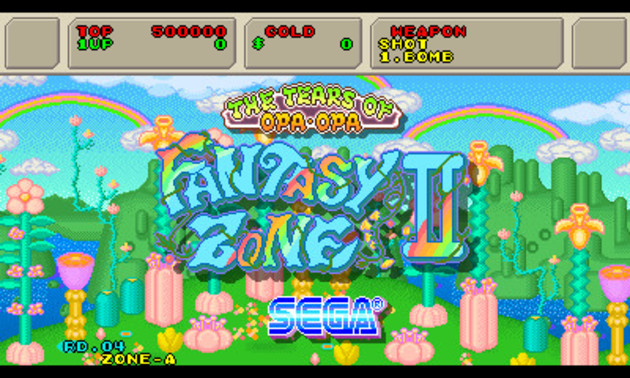 Fantasy Zone II: the Tears of Opa-Opa takes place in the bright and colorful eponymous land known as the Fantasy Zone in “space year 1432.29.06,” whatever that means. If nothing else, I guess that means ten years since the first game. (Yeah, there’s an actual plot behind this sugar-coated aesthetic, one that is canonically tied to the Space Harrier games, at that!) Opa-Opa saved the land a decade before, but is still no closer to solving the mystery behind his missing father. When a new threat to the land emerges, Opa-Opa takes to the sky to free the Fantasy Zone yet again!

Exhilarating, ain’t it? Well, if you’re turning to a Japanese shoot ’em up from the 1980’s for an engaging plot, you’re better off with the opus written on the back of a Laffy Taffy wrapper. Fortunately, gameplay is where games like the Fantasy Zone series shine.

Stop talking and tell me where to stuff my money!

Hold yer horses there, Tex! (Or, scroll to the bottom if you really just want the happy ending) Fantasy Zone II is a side-scrolling shooter in which you can pilot your ship in all four directions at will, similar to Resogun for you young whipper-snappers, or Defender for us old coots. Instead of collecting power-ups as you play, you collect coins to be spent in shops (red balloons which appear from time to time) where you can buy extra lives, single-use super weapons, upgrade your main gun and bombs, or boost your ship’s speed. Unfortunately, your special weapons are all set on a timer the instant you buy them, so as soon as you exit a shop with a weapon selected, it’s power begins to deplete even if you aren’t firing it. Oh, and if you die? Yeah. You lose everything. Because 1980s. This is par for the  old-school course, but it’s likely to frustrate some modern gamers.

You’ll fight off whimsical enemies aplenty in each of the game’s eight stages. However, the most important task of each stage is finding a set of enemy-generating bases which Opa-Opa must destroy before moving on to the boss of each stage. The Fantasy Zone series is known for its large, impressive bosses, and Fantasy Zone II doesn’t slack in that regard. The boss sprites are especially large, and their attacks are varied enough that adapting your strategy to their patterns is rather fun. Just before the final stage you’ll get a chance to fight them all over again in a boss rush level.

When you destroy certain enemy generators, a portal will appear allowing Opa-Opa to traverse between “light” and “dark” versions of reality. Not only is this a departure from the first Fantasy Zone game, but proceeding along the proper path is critical to getting the best of the game’s three endings, as you must complete each stage on the dark side to do so. This means that you will be fighting tougher enemies along the way, but that’s not all. You’ll also need to save up enough coins before the end of the game to purchase an item called the “Tears of Opa-Opa,” which you MUST use as the last hit against Dark Opa-Opa, the final boss of the game.

Why’s Opa-Opa being such a pouty crybaby, anyway?

Sound tough? It should, because it f**king is. Don’t let the bright exterior and upbeat tunes fool you. Fantasy Zone II is no joke. With practice, you can slowly but surely advance along the more difficult “dark” path. You might also be able to strategically save enough coins to purchase the expensive “Tears of Opa-Opa” weapon just before the end. However, besting Dark Opa-Opa on the default settings (you’ll need the best bombs and fastest engine to even stand a chance) is so challenging, that I’d say it borders on the side of being unfair, which is the biggest complaint I have against the game.

Fortunately, M2 likely noticed how tough this progression was and included tons of options to help mitigate these challenges. Not only can you ramp the difficulty down, select your stage, increase your ship stock or abuse the save state system, but there are other options which are even more creative. First, you have buttons assigned for rapid firing of both your main gun and your bombs. This is actually the biggest help you’ll get, as it makes delivering swift punishment to the bosses far easier (especially Dark Opa-Opa).

M2 also tweaked the coin system, as well. Your coin total accumulates across different playthroughs, and as you reach certain milestones, you unlock even more customization options such as onscreen markers helping you find the nearest shop or enemy generator, extended special weapon time, and a “Gold Rush” mode which helps you accumulate coins at a much faster rate. You can also allot saved coins from previous playthroughs when beginning an all-new game, so you’re able to grind for cash, in a sense. Add these factors together, and you’ve got a much easier game without feeling like you’re cheating too much.

But I yearn for a bigger, beefier package… in my mouth

Once you finally put Dark Opa-Opa’s b!+c#-@$$ down and get the best ending, what’s left? Well, there’s also an endless mode called Fantasy Zone II: Link Loop Land, where you pick from two different preset weapon layouts (Opa-Opa or Upa-Upa) and play through an increasingly difficult series of stages to see how far you can advance and how high a score you can rack up before you lose your one and only life. (Pro-tip! Endless mode is a great way to build up coins quickly, which carry over to the story mode) Each stage in endless mode ends with the same boss, but every time you fight him he’s got an extra weapon of death up his sleeve.

Add that all together with smaller bonuses like a sound test and a button configuration (a feature strangely absent from Nintendo’s 3DS Virtual Console releases), and you’ve got the definitive version of Fantasy Zone II. The controls are tight and responsive, the aesthetics are cute and colorful (It is one of the original Cute ‘Em Ups, after all), the music is fittingly upbeat, and there are some little touches that indicate how much fun the original developers had with the title. I just love how Opa-Opa’s little legs walk around like a duck when he touches the ground. D’aww! So cute.

This 3DS version of course employs the stereoscopic 3D feature of the hardware, too. While it works well with the different parallax scrolling layers, the effect isn’t quite as impressive as some other SEGA 3D Classics like After Burner II or Out Run. It’s cool, but it’s not going to blow you away, and turning the 3D effect on runs the risk of it being distracting in an already difficult game.

I’ve got just six bucks burning up my eShop wallet…

If the story mode was taken completely on its face without any added features, I would absolutely fault Fantasy Zone II for being too crushingly difficult at the end. However, with all of the help M2 added to the package for players to boost their chances, I have very few gripes with the game. If you’re looking to judge Fantasy Zone II for its $5.99 value, it’s still a 1980s shoot ’em up which tend to be short (maybe 15-20 minutes if you somehow cruise through it). Other than the inclusion of the light/dark world portals, it’s not markedly different from the first Fantasy Zone title from a gameplay perspective, either.

There really aren’t many other games that successfully combine the bright aesthetic, old-school challenge and the “go anywhere” gameplay that the Fantasy Zone series does. If you’ve never been keen on the original Fantasy Zone, there’s not much here in the sequel that is likely to change your mind. If you’re a fan of the series, you already know to pick up this new 3DS version. However, If you’re on the fence regarding Fantasy Zone games and are looking to try just one, I confidently recommend 3D Fantasy Zone II over the original 3D Fantasy Zone given its deeper level structure.

It may be getting old seeing the words “definitive version” used to describe M2’s work on the SEGA 3D Classics line, but it’s deserved each and every time. 3D Fantasy Zone II is no different. M2 has knocked it out of the park yet again, taking what was originally a very flawed game and transforming it into a vibrant, old-school classic. (I’d like to complete the hackneyed baseball reference by saying that M2 is “batting a thousand,” but I’ll always say that 3D Altered Beast should have been based on the arcade game. Burrrrn!)

Hey! I made it the whole way through the review without saying “Welcome to the Fantasy Zone!” …Uh, that last one doesn’t count.

*For a great breakdown of the differences between Fantasy Zone II DX and the Master System original, see SEGA Arcade Classics Vol. 1 by Hardcore Gaming 101.

3D Fantasy Zone II was played on a 3DS XL system for the purposes of this review. A review copy of the game was provided by SEGA to SEGANerds.com for this review.