Welcome back to the biweekly feature where I run through some of my own favorite exclusive Genesis games, developers and features that were not a part of Nintendo offerings at the time. This is of course inspired by SEGA’s famous “Genesis Does What Nintendon’t” campaign from the early days of the Genesis. I’m also focusing on stuff that isn’t too obvious, so that way we all learn something.

If you missed our first installment covering the letter A, you can check it out here. Otherwise, let’s move on and look at one of the most interesting devices of the early 16-bit generation.

Before the era of games on disc and HD remasters, gamers were typically forced to either maintain a maze of wires and switches in order to play their older consoles, or abandon them altogether. SEGA had an elegant solution for gamers still interested in dabbling in the 8-bit world: the Power Base Converter. 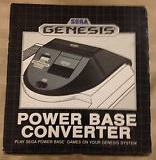 By the power of this device, you opened up your Genesis to the entire library of the SEGA Master System, which included over a hundred games in the US (far more in other territories). This may seem like a simple thing, but when Nintendo was in the position to make the same decision (and we do know that they considered it), they basically flipped Mario fans the Birdo, dooming thousands, if not millions of NES libraries to the clutches of GameStop and JunkoLand (Our household name for FuncoLand).

Besides the device itself, no other hardware was necessary to get the Power Base Converter up and running. No power adapters, no connecting cables, just slide it into the cartridge slot and it’s good to go. So for 40 bucks, Master System owners were able to keep playing their classics with ease, but perhaps the best part was that new SEGA converts could introduce themselves to a whole world of classic games including Shinobi, Fantasy Zone, Power Strike, Zillion, Bomber Raid, Spellcaster, Phantasy Star, and Alex Kidd in Miracle World (I’ve got to cut it off somewhere).

Bear in mind, the Retron 5 is compatible with the Power Base Converter, so whether you are a seasoned Master System veteran or a newcomer to its library, your 8-bit games can still be experienced through this device. Are you a SEGA gamer who never experienced the Master System and have no idea where to start? I can think of one place you might consider starting.

In two weeks or so, I’ll look at the letter C, which of course if for “cookie,” but also something pretty cool from a SEGA Genesis standpoint. Got a guess? Make your predictions now, folks!