Cross Media has been smiling constantly for SEGA Japan these years, not only this has spawned new content on media like the ones with Dengeki Bunko, Vocaloid, or the upcoming Sonic CGI cartoon, but also has been a new kind of business to sustain its IPs and marketing model. We hope that this kind of business can spawn more goodies for future IPs or dormant ones. Hey! A SEGA all stars cartoon would be soooo cool! Or a new Alex Kidd game, even for mobile would be good…

Now its turn for the recently popular among kids 3DS title: Hero Bank. SEGA Japan recently announced in a conference at Akiba that this IP will have an anime, an arcade game and some sweet merch goodies. The arcade will debut on summer, along with SEGA UFO prizes, a Card Game, a manga on Shongukan, and an anime that will be aired on April at TV Tokyo, which is big news considering that prime time anime for children get the spotlight at this station. What is also cool is that the same actors from the game will provide the voices for the anime. 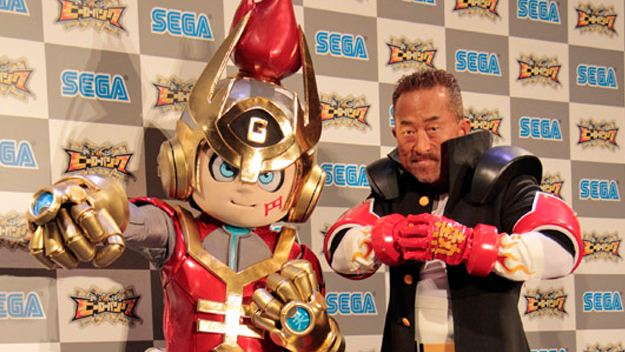 So… our last question about this is: Hero Bank why aren’t you here yet to take money from our children and spread the SEGA word among all the kids? Besides… he’s a hero bank, he should be around for the money!

Attention to anime, manga, speed, drifting, and racing fans! A new Initial D arcade is on the way! SEGA Japan finally announced Initial D Arcade Stage 8 and dates to meet the producer, test the game, and earn a special license, sticker and goodies. The lucky japanese testers will be able to take and drift at full speed Takumi’s legenedary AE85 Levin  Trueno from Akina’s downhill track. I really used to love these games, and my country was lucky enough to get Initial D AA arcade series on cinema lobbys around the city, so yeah, I wish to play this game, but seems difficult since looks that it will requiere the SEGA ALL.NET system to operate, and my country does not have such system available at my local arcades, bummer…

On better News, Beta testing for the Initial D Perfect Shift Online for Ninty 3DS has begun, players should register here to be part of the testing.

Like RPGs and Tower defense? Well SEGA Apps released Chain Chronicle‘s new AD for mobile, so check it out! 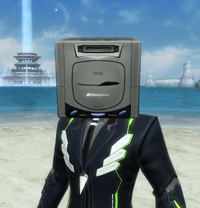 PSO2 GETS A WEIRD UPDATE

PSO2 players will be able to use a Sega Saturn mask as part of the FUN shop goodies, the download will be available for a limited time. Yep, your face will be a console! I want a Mega Drive one!

Looks like PSO2 in Japan gets all the fun over there, they have an episode 2 already, a new crafting system, and were able to test SEGA’s new network system “it Tells“.

But still no plans over here… sigh!

Yakuza Ishin‘s site was updated with new videos, new screenshots, and descriptions on the new play grounds for the game. Check the updates here.