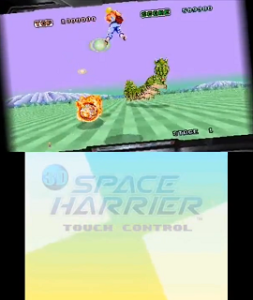 [Foreword: With SEGA’s 3D Classics releases on the Nintendo 3DS, we’re going to be reviewing the titles slightly differently to how we normally do things on SEGA Nerds. Because the 3D Classics are effectively ports of some classic SEGA titles, we are going to look mostly at how well the new 3D visuals affect the games, especially if they help improve the experience, how/what any new features add to the game, how well the game has held up over the years and, more importantly, whether the game is worth buying still.]

It’s been a long time since I last played Space Harrier, because I never really enjoyed the game as much as a lot of SEGA fans. Oh, I could see its appeal – but it was never really ‘my kind of game’, so I have to admit I was a little apprehensive when I came to play the 3D remake for the 3DS, but bugger me if it wasn’t a surprise to find myself enjoying the game more than ever.

Hopefully if you are a SEGA Nerd, you will have at least played the original game, so I won’t bore you with the details of what the game is about. Instead I’m going to talk about the new visuals, game additions and just how this SEGA classic has held up over the years – in terms of enjoyment. 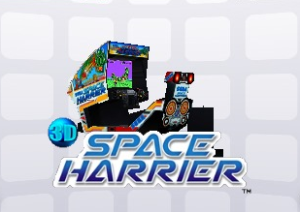 I still haven’t really fallen for the whole 3D phase the entertainment industry seems to be going through at the moment. Yeah, when done right, 3D can add a little ‘something’ to a movie or a game, but more often than not, it seems to be something tacked on and, especially in frantic or fast moving scenes, the 3D just becomes a blurry mess and can actually ruin an experience.

So the concept that SEGA was remaking some 16-bit classics with a 3D overhaul had me scratching my head. “What’s the point?” I thought. Sure I can understand doing this with a game that has 3D polygons, or even isometric titles – so give the illusion of using 3D graphics, but 2D scrolling games? Please. 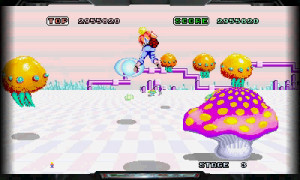 Again I was wrong. Seriously the 3D effects have really added some proper depth to the game. Because Space Harrier is a 2D game, giving the illusion that you are flying/running endlessly forward across various terrains, the game needed to use varying pixel sizes for its enemies – so when in the distance are small, getting bigger.

Well, even though this is technically true, enemies no longer feel like they are just getting bigger, with the 3D layers, you get the sense of actually flying past objects and enemies, rather than them getting larger and disappearing off screen.

The 3D visuals also hold up really well under the speed of the game. As you progress, gameplay gets faster and faster, with more objects and enemies coming at you. Not once did I feel the game’s new visual overlay couldn’t keep up. It was fantastic. 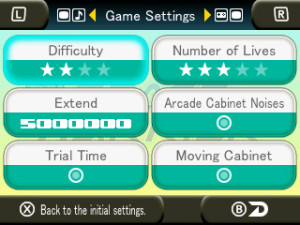 Thankfully, the 3D effects are not the only thing SEGA has brought to the table with the 3D Classics. Space Harrier has been designed to replicate both the home and the arcade experiences of the game.

With the home experience, the game feels standard, but with the arcade ‘feel’ you can adjust the game’s screen size, to see the arcade surround and (this is the bit I love) the screen tilts as you play – just like the moving arcade cabinet would.

It’s hard to explain, unless you’ve seen it too, as you are probably thinking: “But the 3DS’ screen is fixed – how does it tilt?”. Well the physical screen stays in position (obviously) but the visuals of the game screen at the top tilt and turn and shift  depending on the direction of your movements. It’s a bit of a gimmick, but a welcome one – as it added another great experience to this title. 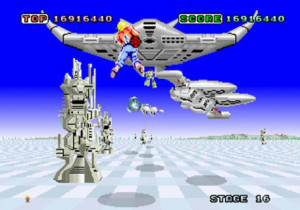 Also, along with the arcade experience, you can ‘insert’ coins to continue. It makes it a little easy, as you effectively have endless continues, but for inexperienced Harrier gamers (like me) it was very helpful.

Other features include the ability to unlock levels as you progress, meaning that you can start from the last level you got to, even after getting a game over.

You have quite a few setting to go through which don’t really affect the game directly, but do add a little something and are fun to play with, such the ability to change the screen type between normal and classic – which makes it look a bit like you are playing on an old CRT screen.

As I said at the start, I never got into Space Harrier originally. I owned both the Mega Drive and an old LCD Tiger handheld of the game and I think I played more on the Tiger handheld than the proper game. I just didn’t find it that fun.

It’s a totally different story now though. I had a lot of fun with Space Harrier this time round and, because I suck at the game still, the option of starting from the level you previously got to meant I could keep enjoying the game, without having to repeat the same few levels (and there’s a lot more levels to this game than I realised!).

Why the smeg did they do that?!

3D Space Harrier is not perfect though. There is one thing that really annoyed me in fact – the audio.

Now, one thing I do have a fond memory of from Space Harrier is the brilliant music. It’s a true SEGA classic. But there seems to be something wrong with the audio in this game – the sound effects are too friggin loud and they drown out the music most of the time.

Despite being able to adjust a couple of audio settings, the music and the sound effects seem to be tied together and when you raise the settings, they both go up.

It’s a shame, because I recall the music being a louder element than the sound effects, I remember humming along as I played. But now, because the game’s action gets so frantic, the sound effects of enemies exploding and my weapon firing completely drowned out the music. Boo!

For a gamer who has no real nostalgic feeling for this game (other than the music) I can’t help but applaud SEGA’s work here. I definitely recommend Space Harrier and hope to see more classics handled this way in the future.

Just a shame about the sound effects taking over the brilliant soundtrack.

– The sound effects seem to drown out the awesome soundtrack!
– The price (though worth it) could be off putting to some gamers 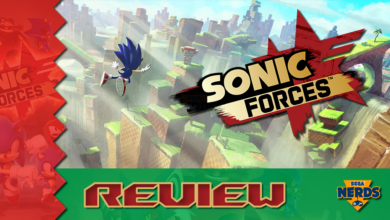