[dropcap]B[/dropcap]ack in its golden years of the early ‘90s, SEGA prided itself in delivering cutting edge hardware that pushed boundaries and pressured its competitors to step up their game.

But since the last Dreamcast rolled off the assembly line and SEGA refocused itself as a third-party publisher, the company Sonic built has shown very little interest in the home console manufacturing business.

As the years have gone by, the desire for many to replay the games of their youth has become incredibly popular, and requests for SEGA to produce a first-party Genesis system are thrown at the company every day.

But instead of developing its own retro hardware, SEGA has instead licensed the Genesis and its library to companies, like AtGames, that have released “plug and play” systems to satiate the desire of the Blast Processing fanbase.

The only problem with that is those consoles have never achieved the level of quality of the original Genesis. Poor sound emulation, inconsistent framerates and cheap build quality are just a few issues that plagued nearly every system AtGames brought to retail. Today, one need only to utter the word “AtGames” on social media, and you’re sure to receive angry posts by gamers whose experiences with the products have been anything but positive.

More frustrating for SEGA Nerds out there, is longtime SEGA rival, turned frenemy, Nintendo, who has shown that when done almost right, a retro console can be incredibly popular. So, one would think if a quality SEGA Genesis system could be brought to market, it could surely find similar success, right?

Well, AtGames is once again giving it another shot, and this time they seem pretty serious about delivering a product that addresses the issues with their units of the past and one that SEGA Nerds and the broader gaming community will want to sit inside their entertainment center.

Sounds pretty rad, right? Well, let’s find out if AtGames has managed to deliver a product worth your money.

The Sound of Silence

Before we go on with the rest of the review, there are a few things I think are most important, so let’s just get those out of the way first.

If there’s one thing that hampered previous AtGames systems more than anything else was the blasphemous sound quality. Thankfully, we can report that the sound in the new system is actually fairly decent. It’s still not 100-percent accurate, and there were times playing Sonic 2, when a portion of a sound effect would fail to play, but for the most part, it was a pretty good replication of the original Genesis sound.

Outside of the sound quality, the framerate stayed fairly solid when playing fast-paced games like Sonic, but there were several instances of frame drop. It wasn’t so bad that it was unplayable, but you could tell something a bit weird was going on. It appears the Genesis Flashback can’t quite handle Blast Processing.

One thing you’ll immediately notice once you boot up the system is its menu system. It’s styled competently enough, but once you attempt to navigate it, everything comes screeching to a halt. Why you can’t scroll through the entire menu with the D-pad makes no sense whatsoever. Instead, you have to press the “B” and “C” buttons to move up and down and the “A” button to select a game. You’ll never get used to this no matter how many times you play, and it’s telling of the poor design that a controller display is present on the home menu page. 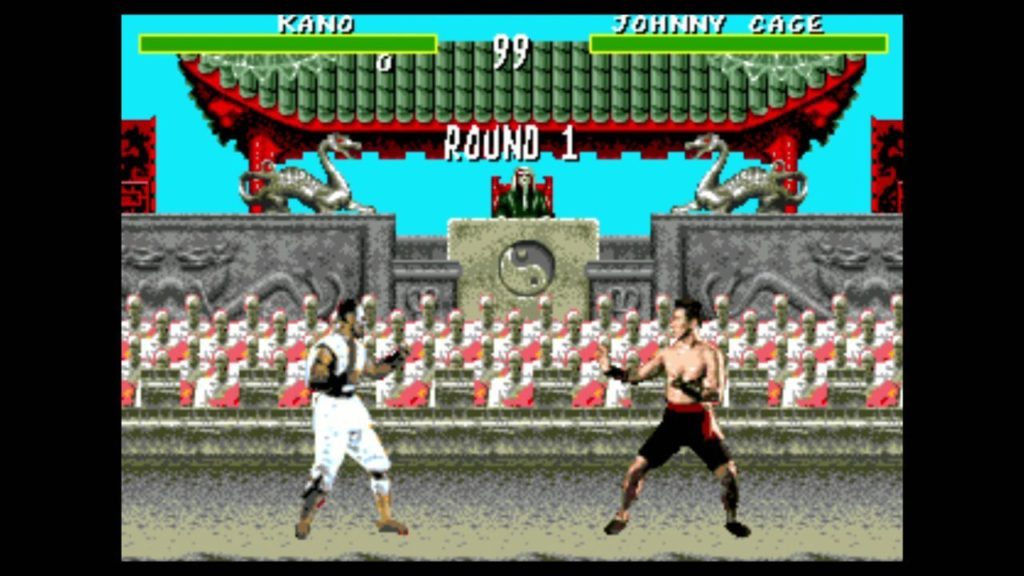 The latest iteration of the SEGA Genesis Flashback is based on the Model 1 Genesis design, albeit a bit smaller, and comes with 55 pre-installed Genesis, Master System and Game Gear games; HDMI output; two 2.4ghz wireless controllers and a cartridge slot so you can still play your physical Genesis collection.

While AtGames promotes the Genesis Flashback as having 85 pre-installed games, 30 of those games are shovelware pieces of crap whose only purpose is to pad the numbers “games” for promotional purposes.

Outside of those, you get a bevvy of Sonic games, including Sonic 1, 2, Sonic & Knuckles and Sonic 3D Blast, not to mention four Sonic Game Gear games. Curiously enough, Sonic 3 is absent from the list, but it’s likely due to licensing issues with the game’s soundtrack. Blame the King of Pop.

Of course, people will gripe about why their favorite game or series was left off the list, and my personal complaint is I wish the Streets of Rage series was included. Aside from that, there’s a noticeable lack of sports games – a genre that was incredibly important to the success of the Genesis. While I can understand a small company like AtGames can’t afford a major sports license like the NFL or NBA, surely they could have added Mutant League Hockey or Jerry Glanville Pigskin Footbrawl, right?

Outside of my whiny complaints, AtGames assembled a respectable list of games that rivals that of the Super Nintendo Classic. 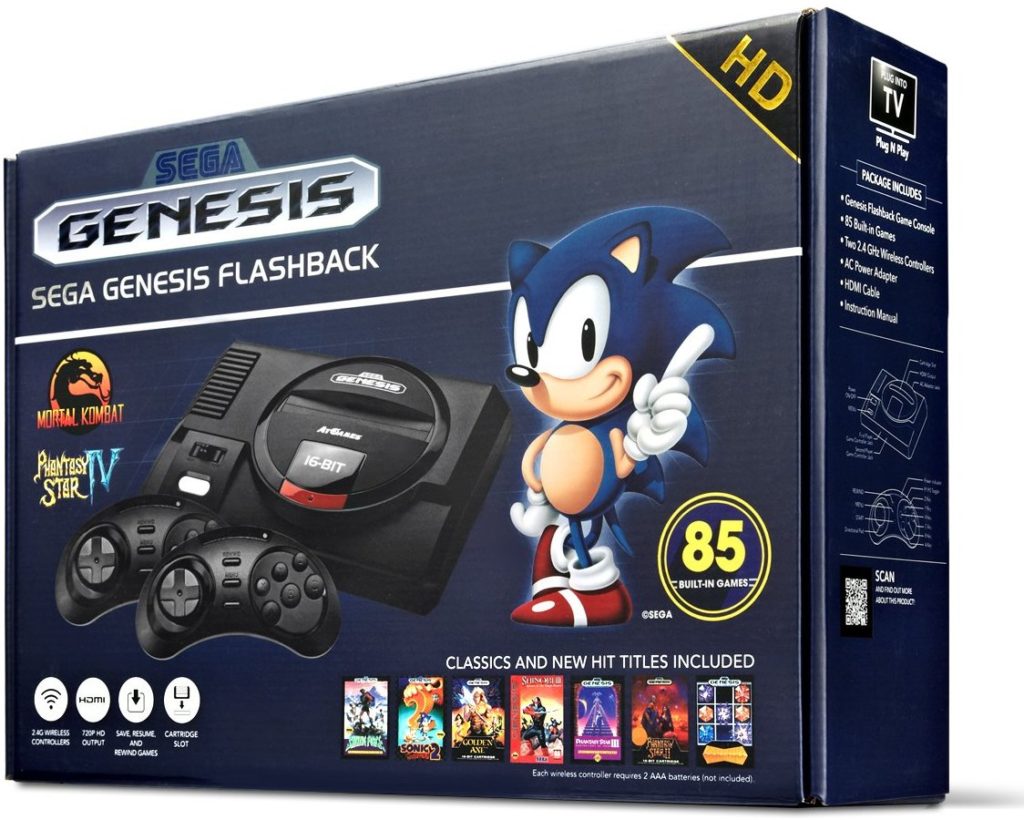 Up until now, AtGames never had the license to use the actual Genesis system design, which is the reason the units looked like small, black bricks. They were able to rectify that with the new system that retains the Model 1’s look and feel.

The plastic on the system feels sturdy enough, but it doesn’t have the weight of the original. The system’s toggle switch feels fine, and the reset button works as a menu button this time around. The only things missing from the original’s design are the headphone jack and volume bar, which isn’t a big loss as I never used them back in the day and certainly wouldn’t today.

One strange and rather annoying design decision is that the red power light is powered by the HDMI cable and not the AC power supply. This means that even when you turn the system off, the light will remain on – its red eye piercing the black of night like the Eye of Sauron. The only way to turn actually turn the light off is to disconnect the HDMI cable from the back of the system, too bad it wasn’t so easy for Frodo and company.

The six-button 2.4ghz wireless controllers are leagues better than previous iterations that used infrared technology and required you to keep the front of the controller pointed towards the system. The wireless range is good enough for most situations and way better than the few feet of cord Nintendo gives you with its wired controllers. There are times, however, when input lag is noticeable in fast-paced games, like Sonic 2, but it wasn’t so bad to completely ruin the experience.

The D-pad and buttons feel good and responsive. Above the “Start” button are “Menu” and “Rewind” buttons. The “Rewind” button rewinds the game about 8-10 seconds, so if you fall down a pit or make a poor decision in a game, you can quickly press the “Rewind” button and get back to the action. Pressing the “Menu” button gives you options to save the game, quit or return to the main menu.

If wireless controllers aren’t your thing, there are two DB9 controller ports, so you can play with your trusty, old wired Genesis controllers or arcade sticks.

From a pure hardware standpoint, the Genesis Flashback and its controllers look and feel pretty good. 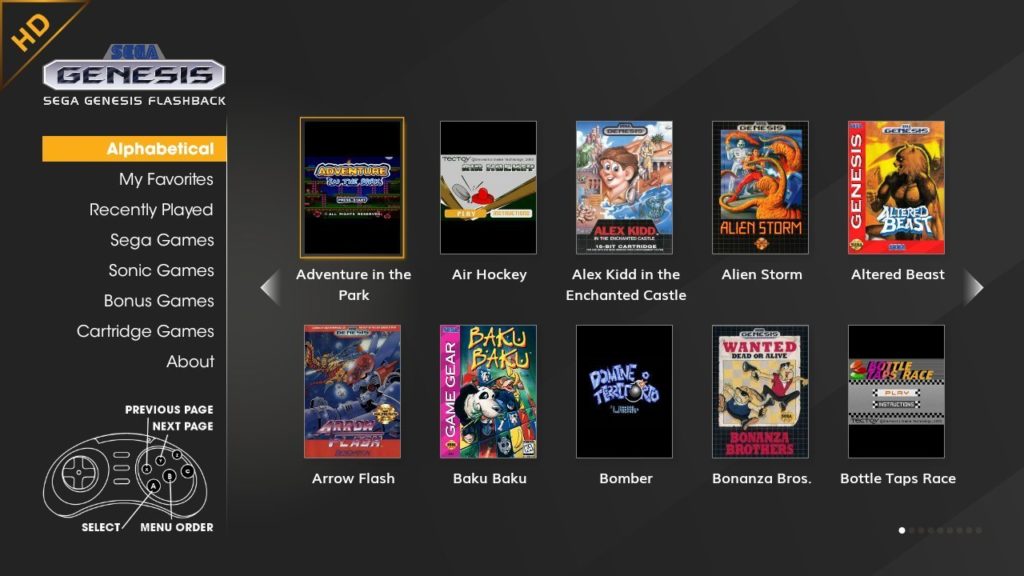 The biggest feature the Genesis Flashback has over the SNES Classic is its cartridge slot. This is something Nintendo fans have been begging Nintendo for, but there’s no way that will ever happen, not when the Big N can continue to resell the same NES and SNES games time and time again on every new system it releases.

What this means for Genesis owners, is your Genesis library is mostly compatible with the Flashback. I say mostly because games with added memory, like Virtua Racing, or lock-on technology won’t work. I also tried the Retro Freak’s Game Gear Converter to see if it’d allow Master System or Game Gear carts to run, but sadly, it did not.

We are happy to report, though, that the system is region free, so European Mega Drive games play perfectly fine on the system. We weren’t able to test Japanese Mega Drive games, but they should be compatible.

After putting the Genesis Flashback through the proverbial ringer, it’s apparent that AtGames has stepped up its game to deliver a product that’s much higher in quality than its previous efforts. If you have your original Genesis still hooked up to your TV, there’s little reason to purchase this device, but if you want a system that’s compatible with your HDMI TV and can look pretty sweet sitting alongside your fancy new game systems, the Flashback is worth a shot.

It’s still not without its warts, but if you can look past its blemishes, you’ll find a pretty solid plug and play system that your friends and family will get a kick out of at the next get together.