Today, SEGA has announced that there will indeed be a Sonic Forces Bonus Edition for the Xbox One, PlayStation 4, and Nintendo Switch. The Bonus Edition will include outfits and accessories from past SEGA and Atlus games such as Jet Set Radio, NiGHTS, and Persona 5. Check out the tweet from Sonic below.

Here is what you can get from the Bonus Edition 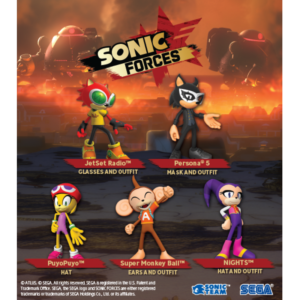 Burbank, California — August 31, 2017 — SEGA® announced today that Sonic Forces™ will launch on November 7 across Europe and that fans can now pre-order the physical-only, Bonus Edition. Available for a limited time only, the Bonus Edition will contain four Sonic Forces art cards and the SEGA/ATLUS PACK add-on, which offers 13 more in-game outfit items and accessories to recreate the look of five other SEGA/ATLUS icons for your Hero Character. Those who pre-order the Bonus Edition from retailers* participating in the pre-order scheme will also receive the Shadow Costume for their Hero Character.

Check out the latest Sonic Forces assets over here and enjoy!

From the team that brought you Sonic Colors™ and Sonic Generations™, Sonic Forces has players experience fast paced action as Modern Sonic, catapult past perilous platforms as Classic Sonic, and use powerful new gadgets as their own Custom Hero Character. The game will be available for Nintendo Switch, PlayStation 4, Xbox One and PC on November 7.

Sonic Forces will be available for Xbox One, PlayStation 4, Nintendo Switch, and PC on November 7th.