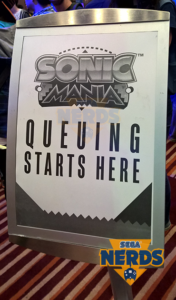 Other than the name, and seeing the logo posted on social media, I knew nothing about Sonic Mania. This wasn’t from ignorance mind, but rather because I chose to ignore everything about it. I refused to watch the trailers or read any other articles about it.

I wanted to avoid the trend that has become common with Sonic games over time. You know what I mean, it goes a little like this: SEGA reveals a new Sonic game is in the works. SEGA reveals logo/name. SEGA releases images and/or trailer of the game. SEGA/Sonic fans go nuts and the optimists in us scream: “Yes! Sonic is back to his former glory,” while the pessimists of the Internet cry: “Noooo! It looks terrible.”

The problem here is that neither party really has any idea what the game is like, until they actually play it. Trailers can be deceiving – I remember Sonic 4’s early screens and trailers had me giggling with glee, but the final result was lacklustre. Not that Sonic 4 was a bad game per se, I enjoyed it – but it wasn’t a “return to glory” that I had been expecting.

So with Sonic Mania, I steered clear of all the …*ahem*… ‘Sonic mania’ surrounding the game… until this year’s Summer of Sonic 2016 event, where I got some hands-on time with an early preview the game.

Damn! Those are some retro visuals! 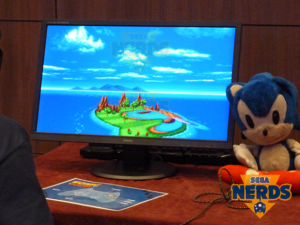 The first thing that caught my eye, while standing in line at Summer of Sonic, was how retro the title screen looked.

You see the Sonic Mania logo overlaying a very 16-bit-looking quasi-3D island (assumedly the world of Sonic Mania). The visuals of the island and its ‘3D’ effects are reminiscent of games such as Street Racer or the original Mario Kart and I mean 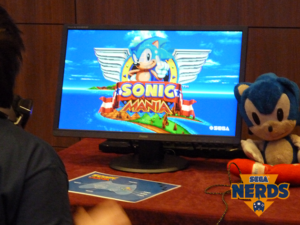 that literally – there’s no modern-day polish or 3D polygons in use (at least from what I could see), just good old 16-bit sprites in action.

The title screen alone seeps nostalgia and, for the first time in years, I felt a warm-fuzzy, comfort I’ve not experienced for a long time with Sonic games. And the visuals and warm feelings continue when you jump into the game. 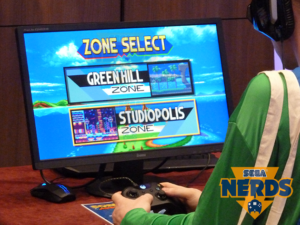 At Summer of Sonic, we had two levels available for us to play, but long queues meant limited play time – so we only had time to really play one.

At the select screen we had one brand new level, Studiopolis Zone (a level with a TV/media theme throughout), and a classic level, Green Hill Zone (from Sonic 1). Now, as I said at the start, I had no knowledge of the game before this day, so in my stubborn mind I said to myself: “I’m here to play a new Sonic game, why on Earth would I play a retro level? What’s the point?!”

So I opted to play Studiopolis Zone and skipped Green Hill Zone. I don’t regret my choice one bit, however, if I had known more about the game, I would have realised that it is not just the Green Hill Zone of Sonic the Hedgehog 1 on offer, but rather a remake, with a brand new added underground section.

And, apparently, that’s what Sonic Mania is about. It’s taking the classic engine/game design bringing in new levels, but also revamping some of the classic levels from yester-year. A bit like Sonic Generations did, but a bit more in keeping with the original source material than Generations. 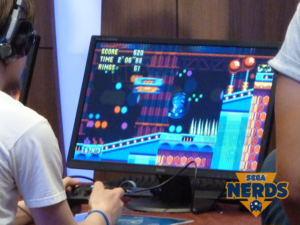 From what I could tell, the game plays identically to the Mega Drive Sonic games; Sonic needs to build up his speed, but once you do build up speed and get your rhythm going, you can find yourself zipping along like a pro.

There’s also the return of the old physics-based gameplay (something that seems to be lacking from more recent Sonic titles), where Sonic makes use of physics to bounce off enemies and springs to reach new areas – it brings back a level of skill required that you just don’t see these days.

And, thankfully, there is NO lock-on attack. YES!

Honestly, I get why the lock-on attack was introduced in the 3D Sonic games, but for the subsequent side-scrolling games I felt it absolutely ruined the gameplay, breaking the flow and making things far too damn easy.

For example, if I need to bounce off enemies to reach a hidden area of the level, I would rather it be a challenge and skill based, rather than just tapping the jump button and letting the game take control. Or if there’s an enemy approaching, I want to feel the fear that I might screw up and miss my attack, not just casually double tap the jump button and continue on my way.

Another favourite return of mine are the bubble shield power-ups – you know the protective bubbles that engulf Sonic and give him new abilities (depending on the type). After Sonic Adventure, these seemed to disappear somewhat from Sonic games, or at least become rarities.

Sonic Mania’s sprites set appear to be identical to those used in Sonic 2 and Sonic 3. But that’s not to say the game is wholly running off old tech – as you play through you’ll soon see a subtle use of more modern effects.

Enemies look a little sharper and seem to move a little swifter, while keeping their retro appearance. In the level I was playing, Studiopolis Zone, you saw uses of transparency and slightly more dramatic use of scenery destruction; though don’t expect grand explosions, the destruction is still subtle.

And I think that’s what helps to make Sonic Mania a return to form for Sonic: subtlety.

SEGA isn’t trying out any complicated gimmicks, or shoving 3D visuals and effects in your face, or a convoluted story, to try and make something impressive and failing. They toned things down and it works.

Fans have been asking for a traditional Sonic game and that is quite literally what has happened here. SEGA, along with the excellent Christian “Taxman” Whitehead and Simon “Stealth” Thomley (responsible for the brilliant mobile ports of Sonic 1, 2 and CD), have taken the 16-bit titles, keeping the gameplay and level designs/layouts and just using subtle enhancements to keep the game feeling fresh enough for modern systems.

Return of the multi-tiered levels

One thing that jumped out at me when playing Studiopolis Zone was how the level design was ‘on point’ for a classic Sonic game.

It’s something that has been missing from some of Sonic’s modern attempts – the labyrinthine, multi-tiered levels that casual gamers will move through with relative ease, but more experienced players will explore, discover new routes and hidden areas full of bonuses and traps.

I found myself noticing new paths as I played through, often stopping and turning back to explore – a few times I was rewarded with extra rings. Another time I was punished with a new item box found in Sonic Mania – the image inside the little TV screen Sonic breaks was Eggman. Now, I’m not a total idiot, I saw the Eggman face and I knew that it was going to be bad – but I wouldn’t be doing my job if I didn’t at least test it out. So I smashed the TV and promptly lost *all* my rings. So yeah, if you see Eggman’s face on one of those item boxes, just avoid it ;).

Studiopolis Zone might also offer some more comfort to Sonic fans, being reminiscent of Casino Nights Zone (from Sonic 2) with an industrial, city-like level design with plenty of those pinball machine-type floating bouncing springs around.

Not a perfect build, yet

With the game due out in 2017 and only two levels on offer, the build that was shown at Summer of Sonic was far from the final release.

On the whole, the game ran brilliantly. There were no graphical issues and gameplay was smooth and fast, however there was a noticeable issue with the sound.

We each had headphones on, to block out the sounds of the event and give us crystal-clear audio, but the crystal-clear sounds are perhaps what highlighted this problem to me.

The game’s music sounded incredibly ‘off’ – it was confusing and muddled, like there were two different music tracks playing at the same time. And I believe that is exactly what happened.

I spoke to some other people at the event, gauging their opinions on the game and a couple of them brought up the issue with the audio too. One person he said he could hear the ‘boing’ sounds of Sonic jumping when he wasn’t performing that action and he said it sounded like the title screen music was playing at the same time as the level music.

But it wasn’t a problem for everyone, I spoke to a couple (quick shout out to Jess and Alan from ‘Five out of Ten’) and Jess said she had no audio problems, while Alan said he had the same issue as me.

As far as I’m concerned, from this preview, Sonic Mania is absolutely the Sonic game I have been waiting for, for years.

That’s not to say I’ve disliked all modern Sonic titles, I’ve enjoyed quite a few, but it’s no secret that the wider gaming community has found Sonic’s more recent adventures disappointing.

Even the side-scrolling games, such as Sonic 4, haven’t been as well received as SEGA might have expected, but there’s a good reason: SEGA hadn’t ever attempted to actually recreate a classic Sonic game, they kept throwing in gimmicks, using modern moves (such as lock-on attacks) and making the levels with a more linear design.

It appears as though Sonic Mania has taken Sonic back to its roots, you don’t have lots of buttons performing different moves, all actions are made by one button and the direction you press on your control stick (i.e. jump, jump left/right, or spin dash).

The problem with many modern Sonic titles, SEGA opts for complex gameplay mechanics and ‘gimmicks’, but this often leads to simple level structures – while visually impressive, you will often find them to be linear and huge sections where the game takes control (such as lengthy rail grinds or spring bounces across the level).

With Sonic Mania, SEGA swapped things and focused on complicated level design and simple gameplay – which is what made Sonic so great in the first place.

The funny thing is that during this year’s Summer of Sonic, Takashi Iizuka (head of Sonic Team) took to the stage with Yuji Naka (Sonic’s creator) and when asked about Sonic Mania’s reception so far, Iizuka said that he was actually concerned about showing off the game. This comment got a small laugh from the audience and I overheard quite a few people surprised by this, many saying that it’s clearly the best Sonic game in years and what people have been asking for, it seemed ridiculous that he or SEGA would be worried about showing it off.

Needless to say, I am very much looking forward to seeing what the final version of Sonic Mania holds and I hope that SEGA can stick to this formula for all future side-scrolling Sonic titles. 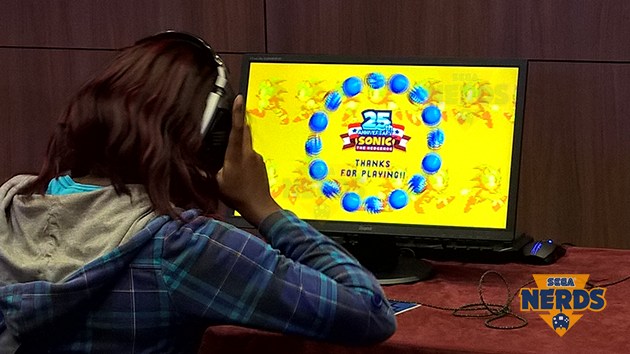