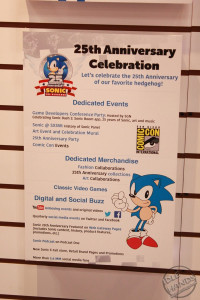 Details of SEGA’s plans for Sonic’s 25th anniversary continue to trickle out. It was just last month when we learned that SEGA has entered into a licensing program with more than 100 licensing partners, and now we have some new information.

SEGA will host a “History of Sonic Panel” at SXSW in Austin on March 19. According to the panel’s page on the SXSW website, Yuji Naka, Takashi Iizuka, Sonic voice actors Roger Craig Smith and Mike Pollock, Sonic social media manager Aaron Webber and SEGA product development director Austin Keys will be part of the panel.

“This panel will take an in-depth look at his Sonic’s rich history across gaming, TV, merchandise and more, giving fans an inside glimpse directly from key figures in Sonic’s history,” reads the page’s description.

In other Sonic 25th anniversary news, SEGA plans to have a party at the Games Developers Conference, hosted by SGN, with art and music to celebrate Sonic’s 25th anniversary and Sonic Dash 2, according to a display found on the show floor at the New York Toy Fair.

Other events will include a 25th anniversary party, Comic Con events, a Sonic podcast and YouTube unboxing events.

We’re not exactly sure what each of these other events will be, but we definitely know this will be one of the most exciting years to be a Sonic fan in a really long time.