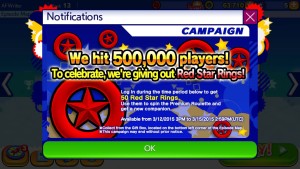 Sonic Runners hasn’t even officially released in the U.S. yet, and Sonic Team’s latest game has already hit a milestone, reaching 500,000 players today. To celebrate, every player will receive 50 Red Stars Rings free when logging into the game.

The game had a soft launch in late February in Japan and Canada on Android and iOS, forcing Android users outside of those countries to find alternate methods to play it.

We still don’t know for sure when Sonic Runners will officially be released in the U.S., as SEGA has said there hasn’t been a firm decision to release it here or in Europe, and that “it will depend on our observations during the soft-launch phase which could take several months.”