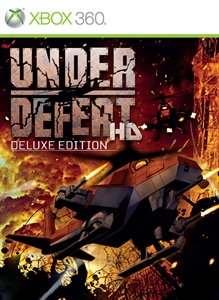 An HD version of the popular SEGA Dreamcast shooter Under Defeat was released on the PlayStation 3 and Xbox 360 in various regions back in late 2012 and early 2013. But the Xbox 360 version never appeared in North America.

That changed this week, however, when Under Defeat HD: Deluxe Edition was released on the Xbox 360’s Games on Demand service. Publisher Rising Star Games said the game would be available for $19.99, which you can find here. However, a separate listing on the Xbox.com site has it also listed for $26.99.

Chris is the editor-in-chief at SEGA Nerds and Mega Visions Magazine. Over the years, he's written for publications like Joystiq, PSP Fanboy, RETRO magazine, among others. Oh yeah, he's also been a diehard SEGA Nerd his entire life.
Check Also
Close
SEARCH
FOLLOW US
Ads