UPDATE: The extra games for those who donate more than the average donation have been announced. They are Sonic CD, Super Monkey Ball 2: Sakura Edition, and an exclusive Sonic wallpaper for your device. 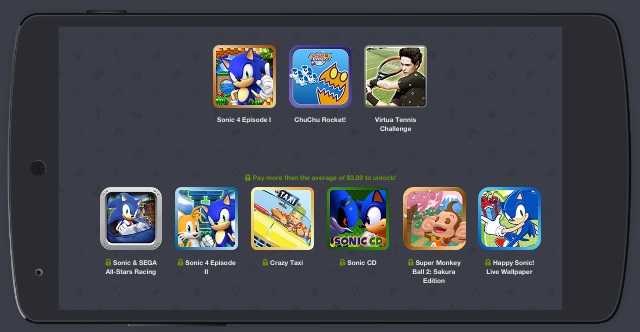 Six games are currently part of the bundle and all are DRM-free. Gamers who donate any amount get Sonic 4: Episode I, Chu Chu Rocket and Virtua Tennis Challenge. If you donate more than the average donation, you will also snag Sonic & SEGA All-Stars Racing, Sonic 4: Episode II, and Crazy Taxi, plus the promise of more games to be announced at a later date.

I’m actually on iOS, but if the Android versions are comparable, I can personally vouch for Crazy Taxi, Sonic & SEGA All-Stars Racing and Chu Chu Rocket. All were pretty good in mobile form, and Chu Chu Rocket on the iPad is easily my favorite version of that game as the added touch controls feel natural and intuitive.

The charities supported are Child’s Play, Water Aid, and Unicef. Don’t forget that you can allocate how much of your cash goes to support the charities, the game developers, and Humble Bundle Inc. itself. Got any millionaires out there? Donate a ton of cash to SEGA under the name “Save Shenmue,” and I think you’ll have few problems making new friends.