Well here we go. Another gaming platform, another version of the Mega Drive’s flagship title and the game to launch one of the most iconic characters in gaming history, Sonic the Hedgehog.

But this time round the game comes with additional features and some 3D sexiness… but will this be another Christian Whitehead-style success, or will M2 and SEGA have another GBA Sonic the Hedgehog port on their hands? 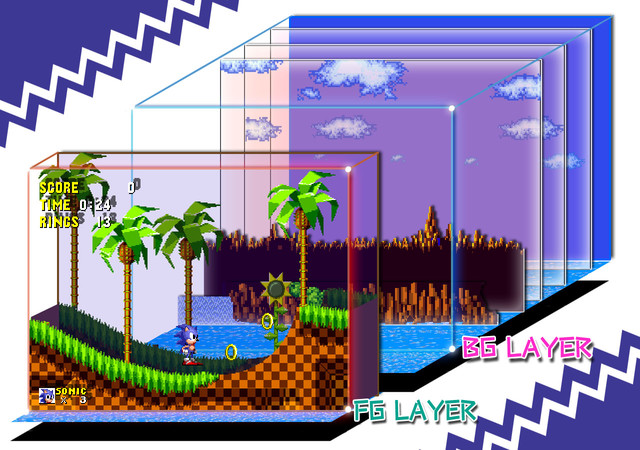 So far two of the three previous titles from the 3D Classics made great use of the 3D visuals – but that was partly due to the fact they were games where you were moving forward, into the back of the screen and the 3D overlay helped to give the effect of depth.

So, just like what happened with Altered Beast, I was expecting that the 3D visuals wouldn’t really enhance the experience with Sonic, but I was wrong.

I think it’s partly due to Sonic’s great/famous use of parallax scrolling – where you have background, middle ground and foreground objects moving at different speeds. Because of the parallax scrolling mixed with the 3D, the foreground objects really do pop out and, at times, I actually got the immersive illusion that I was playing more of a 2.5D title than a standard 2D game.

There was, however, an issue with glitchy graphics on some of the bonus levels when using the 3D overlay. It didn’t affect the gameplay, but at couple of times certain (small areas of) pixels would flicker of black out and this only seemed to occur with the 3D on. 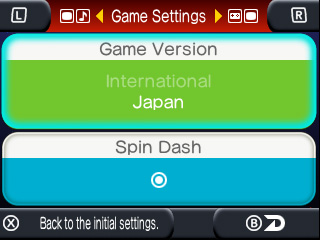 It looks like SEGA took a page out of Christian Whitehead’s book and added some nice features to the Mega Drive’s flagship title, and some are not available in the recent iOS/Android updates.

Included additions (but not necessarily exclusive to the 3DS version) are the abilities to adjust the screen to make it look like an CRT screen, change the game version between International and Japanese and there is also the option to add spin dash to the game.

But there’s also two features I really got a kick out of. One is changing the 3D visuals from ‘Fall-in’ (where the 3D basically goes back, adding depth to the game) to ‘Pop-out’ – where the outer layers of the visuals appear to jump out at you, adding a really decent 3D effect. 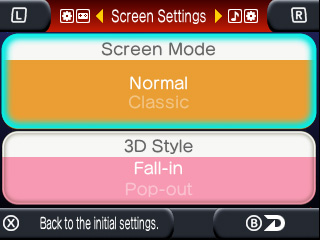 Another feature I quite liked was the ‘Special’ option. This opens up the level select cheat automatically when you start a new game – making it easier to go revisit your favourite levels.

Though, weirdly this option is pointless – as the good old ‘Up, Down, Left, Right, A+Start’ cheat code still works for this version of the game. But I guess this is for complete newcomers to the game, or those who just weren’t brought up in the 90’s, knowing that legendary code off the top of their heads. Personally I can’t hear the opening Sonic the Hedgehog music without singing that cheat in my head.

What can I say here? It’s bloody Sonic the Hedgehog! It’s great!

SEGA hasn’t screwed things up like with the GBA port of the game. What you have basically appears to be a sound port of the original Mega Drive game, just with some additional features on the side.

Why the smeg would they do that?! 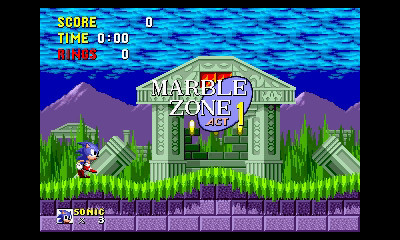 Right here’s where I might upset some people. There is technically nothing really wrong with 3D Sonic the Hedgehog, I genuinely love Sonic the Hedgehog and the 3D visuals do look pretty damn cool, however I am pretty damn fed up with the amount of times SEGA has been willing to whore out the classic Sonic titles.

Being a SEGA Nerd, I think I pretty much own almost every version of the game – off the top of my head that includes on the: Mega Drive, Saturn, Dreamcast, PC, Xbox, PS2, Gamecube, Wii Virtual Console, Nintendo DS, XBLA (download), Xbox 360 (classic collection), PSP, iOS, Windows Phone and MS Surface (via emulators) and now Nintendo 3DS. Oh and on some of those systems I have a couple of compilations SEGA released over the years – so in fact have more than one version on some platforms.

That’s over 14 versions of the same smegging game and basically only the Saturn, iOS and 3DS versions have any real additional features (even minor ones) – but they are, ultimately, the same game.

…So with that in mind, I’m kind of fed up with Sonic the Hedgehog and I’ve lost all excitement playing this game. So I’m perhaps going to give the game a lower score than some might expect.

It’s still a good game and if you want to have a fun handheld experience – but if you want a fuller experience with some really cracking additional features, I would recommend the iOS version – with the exception of the 3D visuals, I feel Christian Whitehead brought more to the game on mobile than SEGA/M2 did with this one.

Ultimately if you are completely new to Sonic the Hedgehog, (or only own a couple of copies) and want a great platformer, then I would boost this score by at least one. If, like me, you are kind of fed up with giving SEGA money for the same game that you own multiple times, then I might reconsider buying this. Yes you do have some new features, but none of them really change the game that much.

[And if I was to put out a request to SEGA, I would love to see a more uncommon Sonic title to be reborn with the 3DS’ visuals – Sonic 3D. I think it would be fun to play the isometric game with a nice 3D overlay – and it’s one of the few Mega Drive titles that hasn’t been whored out onto every gaming device under the sun.]

+ It’s Sonic!
+ The 3D visuals are pretty damn excellent… for the most part
+ Same slick, fast gameplay you know and love
+

– Visuals can get slightly glitchy in some areas with the 3D on
– How many times is SEGA going to re-release this game?!
–
–