Welcome SEGA Nerds to a new biweekly-ish (emphasis on “ish“) feature here on the site where I run through some of my own favorite exclusive Genesis games, developers and features that were not a part of Nintendo offerings at the time. This is of course inspired by SEGA’s famous “Genesis Does What Nintendon’t” campaign from the early days of the Genesis. I hope that this will also be a bit of a learning experience for some, so I’m going to focus on stuff that isn’t too obvious. You’re not going to see games like Streets of Rage or developers like Sonic Team featured here.

I’ve also decided to use the good ol’ ABC’s to set my schedule, going from A to Z. That’s 26 installments; one every two weeks or so over the next 52 weeks. How damn convenient is that, eh? Crikey, we’re so damn clever here at SEGA Nerds, ain’t we? Let’s kick it off with “A” and one of the best exclusive titles of the era.

Assuming that most people get their retro game information from the mainstream outlets, it would be easy to think that there were absolutely no other female protagonists in games between Samus and Lara Croft. Alisia Dragoon from developer Game Arts is here to respectfully disagree.

Alisia Dragoon is a side-scrolling action platformer featuring a magical sorceress named Alisia, who wields lightning magic (I like her already) to avenge the death of her father and save the world from the evil sorcerer, Baldour. Throughout the game you will level up as you progess, giving you extra life and magic power. Your lightning powers are also quite unique, as they automatically target onscreen enemies with only the simple press of a button. You might think that makes the game easy, but your powers deplete pretty rapidly, so if you trudge through the stages too quickly or manage your powers poorly, you’re going to run into trouble.

Assisting you on your way are four magical familiars who each have their own unique abilities, and it’s up to you to know when is best to use each one. They can also be leveled up throughout the game, but they can also take damage and die as well, leaving you without a very critical advantage depending on the challenge at hand.

Admittedly, my copy of Alisia Dragoon is toast for the moment and may require some intensive surgery to get her back up and running; otherwise I would write a full retro review. Even so, Alisia Dragoon is masterful from beginning to end. The game looks fantastic for an early-ish release (1992), the music is stellar, and the stage design, platforming and overall experience is very satisfying.

And it wasn’t on Nintendo.

As I recall, Alisia Dragoon didn’t really get the attention it deserved in 1992. Only now are retro gamers starting to rediscover it and realize how great a game it really was. Do yourself a favor, track down a copy (or boot up an emulator) and check out Alisia Dragoon. 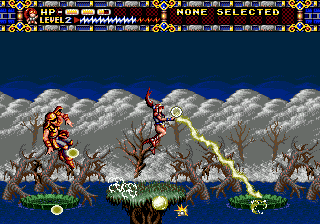 “A” Honorable Mentions (in no particular order)

In the next couple of weeks, I’ll be tackling the letter B, so make your predictions as to what I’ll be covering in the comments! Hint: it’s not The Berenstain Bears’ Camping Adventure.