A number of improvements had been made to these classics, and although it would have been nice (and wishful thinking) to get a complete remake of Shenmue I and II, it feels great to play these classics on modern consoles.

Shenmue fans are some of the most dedicated people in the gaming world. After begging and pleading for 15 years to see a third installment in the franchise, they didn’t stop there; Following the announcement of Shenmue III in 2015, a plea to re-release the first two games on modern consoles began to pick up steam and SEGA finally realized those wishes in the form of Shenmue I & II on PS4, Xbox One, and PC.

It’s been well over 15 years since we have left Shenhua and Ryo in that cave, and various advancements in technology have taken the concept of what it means to be an open world game to a whole other level. I do, however, believe it is unfair to compare these titles with games like Grand Theft Auto V or Red Dead Redemption, as Shenmue I & II is an entirely different beast. As the Shenmue fanbase and SEGA have said in their recent marketing campaigns, this is the game that helped shape open world games as we know it.

In 1999, Shenmue was indeed one-of-a-kind and revolutionary for its time. You inhabited a living, breathing world where day turned to night, snow turned to rain, and NPCs went along their day with schedules designed just for them. You could knock on any door, examine every object, and talk with anyone you encounter. When I popped in the first disc into my Dreamcast, my little mind exploded at the sheer concept of such a game existing.

But enough of my reminiscing; Let’s take a look and see how well SEGA preserved and polished these games for the modern gamer.

The first thing you’ll notice is that Shenmue I & II  is playable in full 1080p. Despite being originally designed for your retro, square televisions, playing Shenmue on an HDTV feels quite natural. When it comes to cutscenes, however, the game is set back to its original resolution. If you would like to play the entire game in its original resolution, you have that option to do so.

For the longest time, Shenmue’s English voice dub has been viewed as campy and pretty hilarious. With the exception of Corey Marshall’s Ryo Hazuki and a select few main characters, the voices of the various NPCs are pretty hilarious. Although in my opinion, that’s what gave Shenmue its charm. If you’re not a fan of the English dub, however, you can play Shenmue I & II entirely in Japanese for the very first time! Fans of the Yakuza series and Japanese dub purists will surely be excited to take advantage of that option.

A feature that many fans in North America had missed out on was the ability to transfer your save file from Shenmue I to Shenmue II. While some may consider this to be a miniscule addition to the game, it really makes every decision you make in Shenmue I have more gravitas. All the training and capsule toy collection you do in the first game definitely pays off when Ryo steps off that boat in Shenmue II. 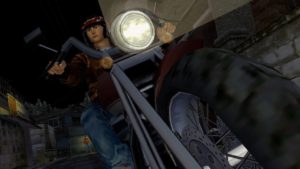 Although SEGA did deliver on a number of improvements in Shenmue I & II, the game isn’t without its hiccups. There are a couple of sound issues and graphical glitches that occur in the game, even after the day one patch. Certain cutscenes such as an interaction with Fuku-san would cut to the dojo floor and I would be left staring at some wood while I get asked if I would like to spar. The music in both Shenmue I and II would occasionally get a bit off tempo or I would get one sound effect playing repeatedly during gameplay. SEGA is aware of the issues and they are slowly but surely addressing them, so at least there’s that.

Although Shenmue I and II  were released over 15 years ago, I believe it was important for SEGA to re-release Yu Suzuki’s games to the modern audience and expose them to what is considered to be the pioneer of open world games. The games are not without their faults and another patch is necessary to alleviate some of those sound and glitch issues, but that shouldn’t take away the experience of exploring Yu Suzuki’s living, breathing, and detailed world.

A number of improvements had been made to these classics, and although it would have been nice (and wishful thinking) to get a complete remake of Shenmue I  and II, it feels great to play these classics on modern consoles.

+ Transferring save files from Shenmue I to Shenmue II

– Certain graphical glitches need to be addressed in a patch