The first short was released this past week, which you can check out above. The short is around 3 minutes long and is animated by Tyson Hesse, who helped create the intro to Sonic Mania.

Let us know what you think in the comments below! 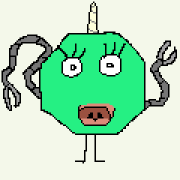