[Can’t be bothered to read the article? Watch the video instead – look above! :)] 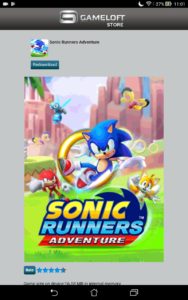 A few days ago we reported that Sonic Runners Adventure had received a ‘soft launch’ in certain countries, such as the UK and Russia, for Android devices.

To access game, players from the chosen countries need to access the Gameloft store via their smart device and pay for the app either via PayPal or their phone bill. This type of soft launch isn’t uncommon, as it gives developers a chance to refine their games, as users test them out on various devices, before its worldwide launch.

Well, lucky for you, we got our hands on Sonic Runners Adventure and want to bring you our impressions so far. I should note that this is a ‘preview’ of the game – as it’s not been officially released and no doubt it’s not the final release build that we have been playing. 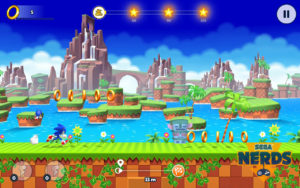 Anyone who listens to the Nerdcast will probably know that I’m not a big fan of mobile games, especially endless runners – I feel they have no real purpose and I enjoy games that have end-goals.

So, I’m happy to see that Sonic Runners Adventure is not an endless runner, players are treated to various levels across different zones and boss battles.

Building on the original Sonic Runners and, I assume, hoping to gain some better success on the back of Nintendo’s well-received Super Mario Run, SEGA (or rather Gameloft) has created Sonic Runners Adventure to be more like a classic Sonic title, mixed with typical mobile phone runner games.

Like the original Sonic Runners and Super Mario Run, Sonic runs along automatically and it’s up to the player to tap the screen at the right moments to avoid obstacles, kill enemies, collect rings and reach their goals.

I didn’t get much of a chance to play the original Sonic Runners, but I can instantly tell this game is an improvement, at least in concept.

As mentioned, rather than running endlessly, you now have levels, each with their own goals (i.e. pickup X number of rings or kill X number of badniks) – you receive up to three stars per level, depending on how well you do with your goals. To me this feels much more satisfying than just trying to ‘get as far as you can’ in a typical runner game. 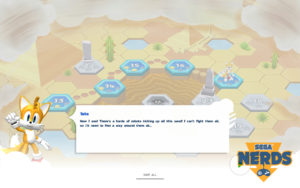 Along with the levels, there is a story to this game too – told through speech boxes next to still characters. You (Sonic) receive a scrambled message from Tails telling you that someone (obviously Robotnik, I mean c’mon) has kidnapped the animals and for you to come help. Well you then go through various levels trying to find Tails, save the animals and get Robotnik.

Yes, it’s flimsy, but it’s a classic Sonic story and it serves its purpose – I don’t think anyone complained about Super Mario Run’s story where Peach was once again kidnapped by Bowser (along with a cake she was baking for Mario) – so I can’t see why they are going to complain about Sonic’s story.

At the time of playing, the game features four worlds/zones: Green Hill, Desert Ruins, Lava Mountain and Sky Sanctuary – each with 10 levels, plus a boss battle and bonus stages – which are unlocked through pickups during levels.

As you progress, you see Sonic make his way across a map of hexagons and you are free to return to earlier levels to try and beat your previous score, or earn more stars – which go to help unlock new zones.

The downside is that during the brief moments of story progression, where Sonic and friends are commenting on the events in the game, they will make refences to things around them like a factory where the badniks are being built, or a fortress – but these never appear in the levels. The levels remain very much ‘Green Hill’ or ‘Desert Ruins’ etc. and the backgrounds and platforms you run on never stray from their initial designs.

In fact, the further you progress, the more often you will see repeating sections of levels. Not just ideas from a level being reused but literal carbon copies of one section of a level being plastered into another, maybe with a lick of new paint to pretend it’s a different zone. It’s a shame, because It just feels like lazy programming. 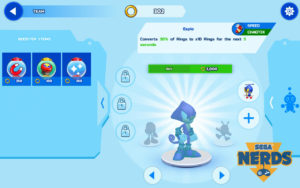 As you progress through the game, you also unlock new characters across three ‘teams’, similar to those found in Sonic Heroes. Each team has three playable characters who have slightly different play styles: Speed, Fly and Power.

So far, I haven’t earned enough rings to buy Team Chaotix or Team Dark, but I can assume they all play very similar to the Team Hero counterparts.

Tails is a little slower than Sonic and he can’t jump as high, but he can fly for brief periods. The flight is something you need to get used to you – because it’s not like the old Sonic games where you keep tapping jump for flight, you have to tap to jump and then tap again and hold, but it’s awkward to always get the right height and instead of dropping to the ground when you want him to, he will glide down, until he’s tired and then drop like a stone – usually into a pit for me.

At the time of writing, I have only progressed far enough to unlock Tails and the second zone, Desert Ruins.

If you’re wondering why I haven’t gone further, let me explain…

Not a final build: 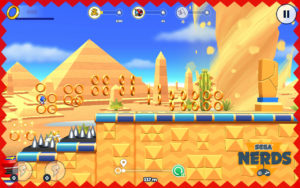 So, as I said above, this is a first impressions or preview, because the game is not in its finished state. By the looks of it, all the content is in place, but the game is far from perfect playability-wise.

I’m running the game on my Asus Zenpad, which should be able to handle the game well, but I’m receiving varying frame-rate issues.

At times the game is running so damn fast it becomes jerky and it hurts my eyes – I can’t really keep up with what’s happening and neither can the game at times it seems. There are moments where it looks like there’s a bottomless pit, only for the ground to suddenly pop-up just as you are stepping on it.

There are also times that the game literally throws you into obstacles, such as certain spring boards and boost rings – that you have no control over – and they fling you into the sides of spikes or enemies, causing you to lose rings.

On my first play, I got to level 5 pretty quickly and I was really enjoying my experience, even with the dodgy frame-rates. But level 5 seems to be a bit of a bitch and the worst example of the bugs I found so far in the game; I’m constantly being thrown into obstacles, or the game gets so jerky that I’m missing things and falling into pits: ultimately resulting in my death and the need to restart the level. I played the level 10 times before I gave up – each time I felt as though I was getting better, but would suddenly die and (usually) it felt like it was not my fault. The level is virtually unplayable at times. 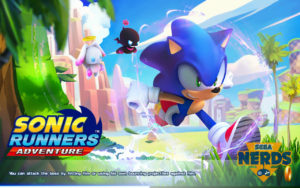 Obviously I progressed further than level 5, but the bugs continue and on some levels Sonic will be running so fast, frames will be skipping as the game tries to keep up with the action. Tails’ levels appear to have fewer bugs though – I think it’s because he tends to run a little slower and the game is more able to keep up with him – but there are still issues of being forced into obstacles and enemies against your will. And there have been the odd level when even Tails’ gameplay will speed up causing framerate issues.

Also, the load times are a little longer than I’d like – varying from 10 seconds up to 30 seconds. But, at the moment, they are manageable and by far not the worst problems in the game. 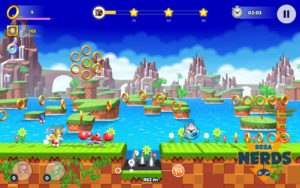 The good news is, that despite the game’s current buggy state, I do see signs of this being a really fun game!

The levels are enjoyable and while they aren’t as complex as the classic 16-bit Sonic levels, they do offer multiple routes (yay!).

When the game is running smoothly, Sonic is very easy to control and (I’m so happy about this) the game has no ‘lock-on’ attack and I feel there is more skill involved in this game than other Sonic titles. If you successfully jump on one enemy, Sonic tends to bounce along across other enemies – but you have that initial jump that requires some skill.

The way levels play out is different too, adding to gameplay variety. Some levels you go from point A to point B and need to achieve a goal in order to earn stars and unlock the next level. But some levels have you run laps, where you repeat the level 3 times – now wait – on paper it sounds bad, but it works really well, as it offers you a chance to explore new routes on each lap and any rings you previously picked up are no longer there, making it more of a challenge to seek out the different paths a level might take.

Another plus are the unlockables and upgrades. As mentioned you can unlock up to 9 playable characters and along the way, upgrade your teams and use special booster items: such as invincibility or lining all bottomless pits with springs, so you don’t die.

Ultimately, I’m impressed with Sonic Runners Adventure. I don’t tend to like mobile games, but this is one that I can see myself playing, enjoying and completing.

Right now, though, the game is far too buggy to be released commercially. I’m not sure when SEGA/Gameloft intends to officially launch the game, but I do hope the team is able to fix the frame-rate issues and unfair deaths that I experienced.

So far, it’s definitely a title to watch out for and has the potential to be a thoroughly enjoyable Sonic the Hedgehog experience.

Expect a full review of the game when it is finally released worldwide.