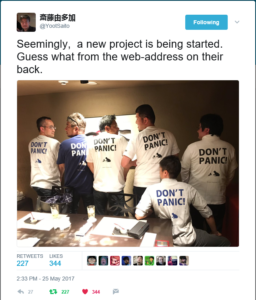 UPDATE: It’s also been brought to our attention that Yoot Saito also tweeted out another, vaguer teaser for Seaman a couple of days ago – with an image of a CD that appears to have the original recordings made by Leonard Nimoy. You can find it here.

[Original post]
Seaman: it’s a game that some SEGA Nerds know well, though not so many played. Those that did get their hands on it were in for one of the most unique and bizarre gaming experiences ever created. It only received one sequel on the PS2 in Japan and fans of the game thought the franchise was dead… until now.

The game’s original designer, Yoot Saito tweeted out an image today, showing a team of developers all bearing the legend “Don’t Panic!” – other than a reference to Hitchhiker’s Guide to the Galaxy, this was also the messaging used with the original game.

Nothing is officially confirmed yet, but all the signs point to a sequel or, at the very least, possibly a port to modern consoles – or maybe even the PC…

Not many know, but the original Seaman was originally meant to be ported to Windows, with your Seaman being able to interact with certain programs on your computer. It was, obviously, cancelled before it got off the ground. But it would be interesting if that idea has resurfaced.

Along with the tweet, there is a link to a Seaman website that is currently under construction, here… looks like we’ll have to wait and see.

For those who don’t know much about Seaman, the game was originally developed for the Dreamcast and had gamers take charge of a sea creature and learn to nurture it and let it flourish. The trick was that you didn’t have any instructions – only a microphone that came bundled with the game.

What’s even more bizarre is that the creature would develop a fish-like body with a human head and would soon learn to understand you and talk back to you – with the Western release featuring the voice of non-other than Leonard Nimoy (RIP).

It was an extreme form of virtual pet that required daily love and nurture from the player, left alone too long and you could boot up your Dreamcast to find a dead Seaman. Left alone for a while (not long enough to die) your Seaman would tell you off and even shout abuse at you – after all, you are its owner and supposed to take care of it.

It was bizarre, weird, slightly scary and we want more!