If you like action, shooting and fighting against impossible odds, Vanquish is a really fun game, where the combat rarely lets up and every section has something new to offer. Even after all this time, I still really enjoy the game and the PC port brings it to a whole new audience with much appreciated enhancements. It's a shame about the blurry backgrounds and lower frame-rates in cut scenes.

[dropcap]I[/dropcap]t was way back in 2010 when Resident Evil mastermind Shinji Mikami’s Vanquish slide-boosted its way onto the Xbox 360 and PlayStation 3, but today (May 25, 2017) SEGA has re-released the game on PC for a new generation to finally enjoy. Following the success of Bayonetta’s recent PC port, how does this other PlatinumGames-developed title hold up seven years later?

First, I should explain what type of game Vanquish isn’t. From screenshots, it would (and was back in 2010) very easy for gamers to pass this off as another cover-based shooter, similar to Gears of War.

But once you jump into the game, you can see some very big differences. Yes, it’s a third person, over-the-shoulder shooter. Yes, it has cover-based shooting mechanics, but that’s where the similarities with Gears of War pretty much end.

Vanquish’s key difference (and core gameplay mechanic) revolves around the Augmented Reaction Suit the protagonist, Sam Gideon, wears. Rather than a big, slow, bulky war veteran – you play as a nimble, fairly inexperienced researcher-turned-soldier with propulsion jets strapped to your suit that allow you to slide across battlefields in a matter of seconds.

Plus, throw in some bullet-time, some pretty epic-sized bosses and a space station and you’ve got yourself a very different game entirely. 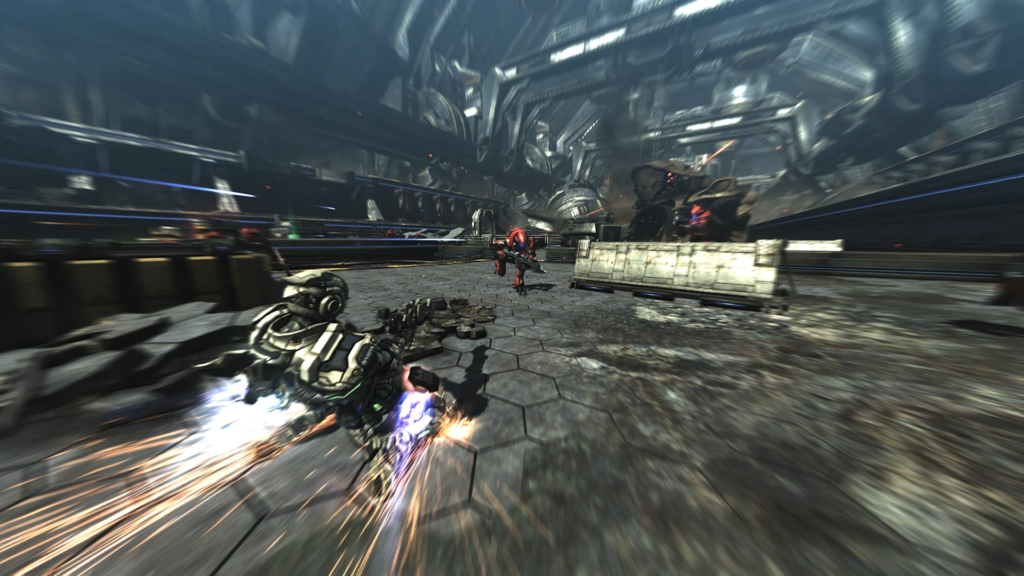 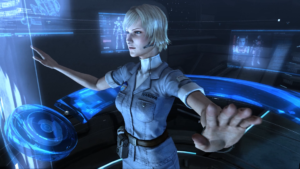 Vanquish’s story is not an award-winning epic; if anything it reads like something from an ’80s action film starring JCVD. That’s not to say it’s terrible, but rather down to taste.

The plot is simple enough. Essentially, a massive space station has been built and on it is a world-renowned scientist named Dr. Francois Candide, who’s responsible for a revolutionary energy technology that essentially alleviates the world’s energy problems.

The Russian government is overthrown in a military coup, and its new leader, Victor Zaitsev, takes his forces into space to hijacks the space station, capturing Dr. Candide. Zaitsev then turns the space station into a giant weapon and uses a microwave laser (I’m not making that up) to destroy San Francisco and holds the world hostage.

The USA (of course) launches a massive attack on the space station in a bid to recapture it, and you, a DARPA researcher with a badass suit, are sent in with some military personnel to kick ass.

It’s cheesy, over the top and simple to follow, and is a perfect compliment to its gameplay. I enjoyed the story, but there were times when the dialogue could be too much – with lots of male testosterone thrown about by Sam and one of the main military characters, Lt. Col. Robert Burns – who are always butting heads and shouting verbal abuse at each other, while also helping each other. 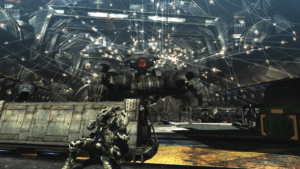 As mentioned, Vanquish takes the traditional cover-based shooter games and adds a bit more flair. Sam’s suit allows you to slide around battlefields, allowing you to avoid enemy fire and quickly get into better positions for taking on larger opponents.

This mechanic speeds-up the gameplay style over other games in the genre, and it’s what makes Vanquish feel so unique and fresh, especially at a time when people were beginning to become tired of slow-paced shooters.

And it’s not just the suit that lends itself to a different experience, Vanquish essentially takes the concept of ‘bullet hell’ scrolling shoot-em-ups and places it in this 3D shooter: when you enter battlefields (especially on higher difficulty settings), you’re treated to a barrage of enemy fire from all angles, and it can take everything you have to avoid instant death in many situations. On easier settings, death doesn’t come as quickly, but it’s still as frantic and enjoyable. 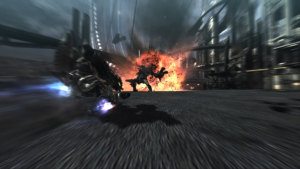 Mastering the mechanics can take some practice. The game does immediately (before any cutscene) put you in a tutorial situation. Yes, I hate tutorials as much as the next gamer, but Vanquish’s one isn’t so bad really.

The only tutorial you are forced to undertake involves looking around with the camera, to make sure your vertical/horizontal settings are as you wish (us inverted players will need to change this in the options). But then you have a choice of whether you want to learn the rest of the gameplay mechanics, or just go ahead and play the game.

If it’s your first time playing Vanquish, I highly recommend taking the tutorials, as learning the finer mechanics is a massive boon to any player hoping to make the most out of the game.

As you slide around the floor, you do need to be careful of your energy consumption – after a few seconds your suit will overheat, you’ll stop sliding and find yourself unable to dodge attacks so easily until the suit cools down. Your energy recharges in a few seconds usually, so it’s best to manage your sliding time and stop before overheating.

When sliding around, you can open fire on enemies – this engages a bullet-time effect, allowing you to easy target and hit enemies, while their projectiles fly overhead. This is often crucial against vast numbers or larger enemy types, some of which are the size of a small house.

One battlefield at a time 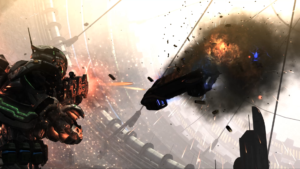 Once in the game and past the opening cutscene and pointless part of walking down a corridor of spaceship as it’s under attack, you go straight into the action with a rather small and easy battlefield to get you used to the game.

Rather than levels, the game is essentially broken up into different areas, or (as I like to think of them) battlefields. You approach one battlefield at a time, after each one, you have a minute or two’s grace where you can collect any weapon drops or upgrades and sometimes will have set conversations/cut scenes to help progress the game’s plot or explain where you are in the space station, or your next objective.

One key thing that stood out for me when I originally played Vanquish (and still does stand out) is that none of the battlefields/areas are the same. The objective is usually the same – kill everything. But you never see repeating areas and the environment often features unique set pieces that, at times, can surprise and blow your little gaming minds. 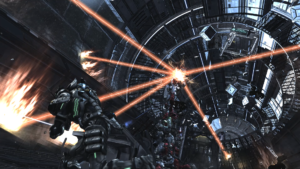 The game feels fresh throughout, never putting you in exactly the same predicaments twice, or overstaying its welcome with ideas. You have generic gaming situations, such as shooting enemies on from fast-moving train, or protecting a vehicle from attack – but these sections, while unoriginal, don’t drag on and they are not repeated.

So often games will have a mechanic or idea on a level and then repeat it over and over later in the game, ad-nauseam. Vanquish doesn’t do this, the only things that do repeat are the enemies, where early boss-types might come back as a more standard enemy later in the game, but I can forgive this, as they can only program a finite number of enemies and they are used in a way that they never become tiresome.

Ultimately, the battlefields are all unique, some have incredibly awesome set pieces and even background objects can come into play. So be careful! 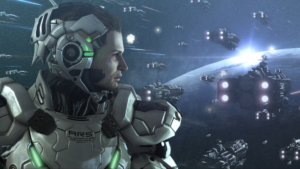 Similar to Bayonetta’s PC port, Vanquish is essentially the same game as on consoles but adds increased resolutions (4k support, yay!), higher frames per second (depending on how powerful your PC is) and a slew of graphical options like, anti-aliasing, scalable textures and shadow quality, to name a few.

You shouldn’t go in expecting brand-new, remastered visuals, but if you have a powerful PC that can run the game at near max settings, you’ll see a very noticeable improvement over the previously released console versions.

For a seven-year-old game, it still looks really good, and the benefits of higher spec graphics cards go to help keeping things fresh. However, Vanquish is set on a big open, cone-shaped space station and while you can’t roam freely, you can see for miles around you. The backdrops, while kind of cool do look really dated now – with many flat textures and blurry objects viewable around you; the highest graphics settings do nothing to resolve this. But they are only backdrops for aesthetics, so it’s possible to forgive this. 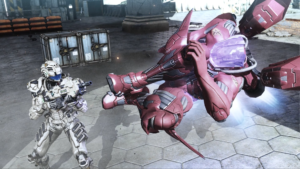 Another difference is that you can now use keyboard and mouse controls, along with modern controllers (we are told some older controllers won’t work). I used my Xbox 360 controller to play the game and found it to be spot on. I’m also happy to say that the keyboard and mouse controls lend themselves much better to Vanquish than they did Bayonetta, which I found to be awkward, to say the least.

One other benefit over the console versions is that, just like Bayonetta, the loading times are nonexistent. Vanquish’s loading times were never really a problem, but they were there and broke up the gameplay between scenes. In the PC version, the game flows beautifully as it instantly loads each new section.

A downside is that cutscenes in the game are pre-rendered and have not been updated. Therefore, they feature a lower FPS than most of the gameplay, plus there’s noticeable screen tearing throughout. It’s a shame but won’t really ruin your enjoyment and SEGA has highlighted this is something they can’t/won’t fix at this time.

Vanquish is still a unique title, with fast-paced intense and frantic action throughout. While the story and dialogue isn’t something everyone will appreciate, I quite enjoyed it for the most part and it serves its purpose – you just have to take it with a pinch of salt.

If you like action, shooting and fighting against impossible odds, Vanquish is a really fun game, where the combat rarely lets up and every section has something new to offer.

Even after all this time, I still really enjoy the game and the PC port brings it to a whole new audience with much appreciated enhancements. It’s a shame about the blurry backgrounds and lower frame-rates in cut scenes.

The controls on PC are pretty much perfect for modern controllers and the keyboard controls are a lot better than Bayonetta’s – making it more enjoyable for those PC gamers who prefer a keyboard/mouse setup.

If you didn’t get a chance to play it back in 2010, I’d suggest getting it now: visit Steam store page.

Cons:
– Background visuals look dated
– Dialogue could be too cheesy for some
– Took 7 years to come to PC