[Update: SEGA has taken the wraps off its Bayonetta teaser site, and it’s confirmed that a Bayonetta PC port is now available on Steam for $19.99. You can find it on Steam here.

In addition to supporting 4K video at 60fps, this port supports anti-aliasing, anisotropic filtering, SSAO lighting, scalable texture and shadow quality. There’s also an option to switch between Japanese or English voice acting and subtitles at any time.] 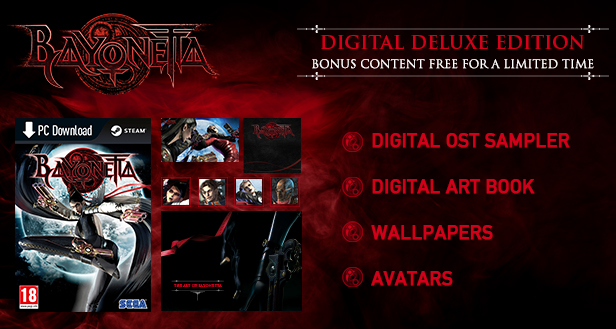 SEGA has plans to release a Bayonetta port to PC today featuring 4K support, according to Gematsu by way of an Engadget report.

Gematsu says if people purchase Bayonetta by April 25, they’ll receive the Digital Deluxe Edition that includes “a five-song soundtrack, digital art book, and exclusive wallpapers and avatars—at no additional cost.” There’s no word yet as to how much the game will cost.

SEGA opened a new Bayonetta website last week with a countdown that is set to end at 11 a.m. EST, which will reportedly announce this information.

Deadly Grace
An alluring, stylish and all-action heroine unlike anyone else on the gaming landscape, Bayonetta is ready to push your senses to the limit.

Supernatural Powers
Unleash gruesome torture attacks such as the Iron Maiden, Guillotine and more to finish off enemies and send them to hell.

English and Japanese Voice Overs
Freely switch languages and subtitles at any time.