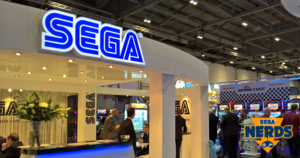 This week is the EAG expo 2017, held in London’s Excel Exhibition Centre, and for SEGA Nerds everywhere it is something of an extra exciting event this year – because SEGA Amusements Europe is showcasing the return of Daytona USA, with Daytona 3, or rather ‘Daytona Championship USA’ as it’s officially titled.

In fact, regarding the name – I should get this out of the way quickly – it might disappoint some gamers out there to hear that this is not Daytona 3.

I was told by a SEGA rep that the game isn’t officially known as ‘Daytona 3’, because it’s not an entirely brand new game in the series – it’s a reimagining of the classic Daytona, with some added tracks and additional features. So, because it’s more of a remake, they haven’t named it Daytona 3 – although that won’t stop the Internet from calling it that!

The build shown at the EAG expo wasn’t the final one, SEGA hopes for the game to finished by March/April 2017 – the one I got my hands on was, I’m told by SEGA, about 75% complete. The game was very playable, but was missing some features and needed some gameplay tweaks done to it – which SEGA is aware of and I’ll get onto in a bit.

As a result, this won’t be a full review of the game, rather a hands-on preview. 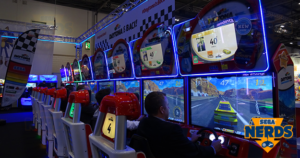 The cabinet setup is virtually identical to the original Daytona – an adjustable seat that is fixed (i.e. no motion or game-controlled movement), the typical accelerate and brake pedals, the classic 4-button view change, up/down manual gear shift (for those who want to feel like professional racers) and, of course, a steering wheel with feedback.

Linked together in a row of eight cabinets, Daytona Championship USA is due to have 8-player races, although the build at the show could only support up to four racers at a time.

The cabinets also feature cameras situated above each screen, with face-recognition which centres the camera on the driver’s beautiful features and displays the live-action footage in another screen above – so spectators can see more of what is going on.

Additionally, as drivers close in on their competitors during a race, or a new driver takes the lead, a line appears above nearby rivals, leading to a box on the side of the screen – the boxes showing the live faces of the competitors in the race. It’s a feature that does little to affect the main game, but is there to help keep track of the race progress and build up rivalries. 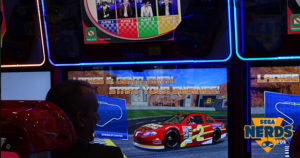 It’s not just the cabinet that brings back the classic Daytona feel. The gameplay feels unchanged over the years. The cars certainly handle better than the Saturn and Dreamcast counterparts of Daytona USA (which never seemed to be able to recreate the arcade experience perfectly).

Competent drivers will be able to slide cars round corners when needed, or stick firmly to the road if you’re not feeling brave enough. As with the original Daytona arcade, drifting cars is not like other SEGA racers, such as OutRun 2 or SEGA Rally 2 – where the game makes it simple and players are virtually expected to slide around an entire track. Daytona leaves drfiting to those brave enough – even when you learn how to drift, mastering going round a corner sideways still takes additional practice; don’t hit the corner with enough turn or going too fast and you’ll find yourself going side-on into a wall, turn too far and you’ll be spinning around corners instead.

But that just makes it all the more satisfying when you do get your eye in a pull off a perfect drift.

The speed of the game was as impressive as always – if you manage to build up momentum and are skilfull enough to avoid crashing or scrapping against the walls on corners, you’ll find yourself really zipping around the tracks at break-neck speeds. 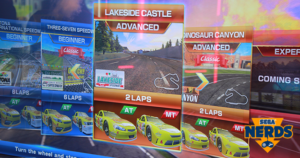 As mentioned, Daytona Championship USA is more of a remastered version of Daytona USA. The game features improved visuals, some new features and three new tracks – but also the three original tracks remastered too.

The final game is set to include six tracks to race on, with two Easy, two Advanced and two Expert tracks – though this version only had four tracks available, missing out on the two Expert ones. 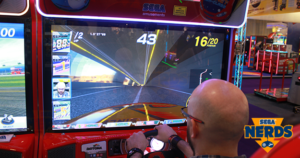 The remastered tracks were exactly as I remembered them from the original Daytona (and I played enough of the Saturn versions of Daytona back in the day, to have them ingrained in my memory) – just with better visuals and smoother gameplay.

All the memorable track features remain, such the Sonic the Hedgehog carved into a rock-face above the final corner of Three-Seven Speedway. But rather than the engraving seen in the original Daytona USA, Sonic now sticks out further and more impressively than before – like a proper statue made out of the rock.

One negative thing though, is that while the visuals are a vast improvement over previous entries – it didn’t feel/look like a brand-new game. Maybe I’m spoiled with PS4 and Xbox One racers – but for a game released in 2017, I was expecting a bit more detail and ‘depth’ (for want of a better word).

Don’t get me wrong, the visuals are solid, they look good and, at the same time, instantly bring back memories of the original Daytona – but they didn’t impress in a way I would have hoped of a game released this year. 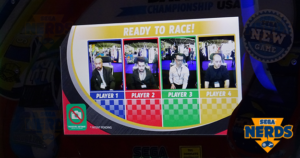 Multiplayer is always where Daytona has held its value and success. The single player against the AI is fun, but challenging for many; it’s when you throw in seven other competing humans that it really brings out the best of the game.

At the show, they had the eight cabinets setup, but unfortunately the maximum number of human players that could be linked was four – though it was still great fun.

On the track, you still have the 20-40 (depending on the track) AI racers, but the multiplayer race is very much about the human players, with the ranking displaying your position out of how many human racers there are; so even if you all finish behind the AI racers, it doesn’t matter – what matters is where you place amongst your friends (or enemies). 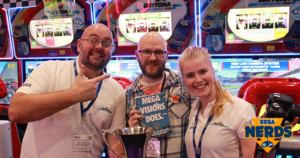 I had a little bought with two of the reps from SEGA in a three-player race. Ultimately, I got a good lead early on and held the race – but just having the others there racing made it even more exciting and the competitiveness built up to the point that the SEGA reps were bashing their cars against each other, ending up in a big crash – which I had to avoid as several AI racers were also caught up in the collision. 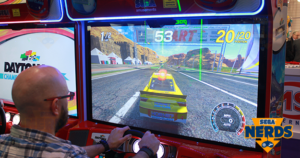 As mentioned, the build at EAG had some limitations – such as the missing Expert tracks and lack of eight-player mode.

It is also set to feature additional gameplay modes. On display at EAG was the standard ‘quick race’ mode, which you choose a track and play.

They also had the ‘Championship’ mode available to select – but it wasn’t working properly. The game stated that in Championship mode, you race across three tracks one after the other and see where you rank at the end. The mode loaded up and I did get to race one track (which you don’t get to choose – it seemed to be set to Daytona International Speedway) but then it was game over. I tried again, in case I didn’t rank high enough – but even when I came 5th in the race (probably the highest rank I’ve ever achieved in a Daytona arcade – because I generally suck), the game still told me it was game over. 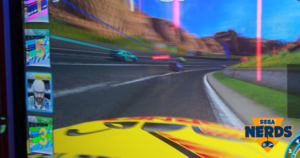 A SEGA rep later confirmed that the mode, while still selectable had been disabled in this version.

In the final version, there will be at least one other multiplayer mode, called ‘Party Tournament’ – which, I’m told, features a sort of knock-out championship mode, where racers are eliminated. But the SEGA rep didn’t go into much more detail.

Also, there was an issue with the feedback on the steering wheel and the handling. The feedback was weak and often felt ‘off’ when turning into corners – sometimes you could feel the wheel fighting back (as it should), but then you go around another corner and it felt loose.

However, this was a problem that a SEGA rep told me about openly, without me even asking the question first, and it’s something the developers are aware of and I’m told will be rectifying in the final build.

The build of Daytona Championship USA, while not complete, was very good fun and played much like I would expect a final build of a game to.

The niggles with steering didn’t affect my gameplay experience, I noticed the feedback issue, but it didn’t hamper my driving in any remarkable way. And SEGA promises to rectify these issues in the final build of the game.

As highlighted, the visuals are solid, but perhaps missing the “Wow-factor” modern gamers might expect to see from racing titles.

Some might be a little disappointed to hear that this is not an entirely new Daytona game and it’s not officially called ‘Daytona 3‘ – but it does feature enough new content to be enjoyable, especially for an arcade title. If a port comes to home consoles, then SEGA might need to whip out something extra (to make it last a little longer), but as it stands, it’s a great game.

Ultimately, I cannot wait to play the final version of this game and get to race in a proper eight-player tournament! 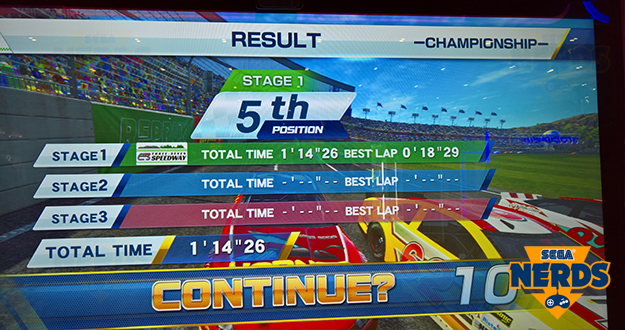 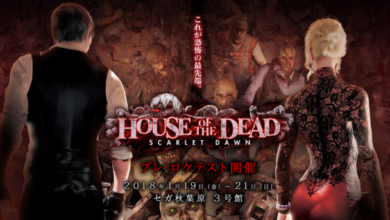