For the past two years, Garett Yoshimura (SpacySmoke) has been trying to gain supporters for a LEGO set that features SEGA Classic Arcade Machines. The petition currently has 8610 supporters and needs 10,000 supporters with 64 days to go.  Team Yu, the campaign group who has been integral to bringing Shenmue back from the ashes, interviewed Garett Yoshimura about his project, which you can check out below.

Via TeamYu :
Would we be right in guessing you enjoyed Lego as a child? What were your favorite sets, themes, pieces?

Yes! Lego was a toy I kept coming back to throughout my childhood, it truly is a toy that can grow along with you. My favorite theme was the space theme, and one of my favorite sets was also one of my last: set 6990 – the Monorail Transport System which came out in 1990. I was already sort of “ageing out” of Lego, being 13 years old at the time, but I couldn’t help but ask for it as my birthday present instead of something else that I was probably interested in like videogames or something. Lego pieces back then weren’t as diverse as they are today, so I don’t know if I had a favorite piece, but I remember liking tiles a lot because they were smooth and were useful for having movable parts on a model.

Is this your first submission to Lego Ideas? If not, what other sets have you proposed and what kind of support did they receive in comparison?

This is actually my third submission to Lego Ideas. My first two submissions were a food truck and an ambulance. The food truck did moderately well, just shy of hitting the half-way mark of 5,000 supporters before it expired. The ambulance did not do as well; it had maybe 1,500 or so supporters. Having a project connected to an existing license makes a world of difference.

What memories do you have of the games featured in this proposed set? Why did you choose each of them specifically?

My brother and I loved these games at the arcades when we were little. Just the look of the scaling sprites, the vibrant colors, and the cool factor of those deluxe cabinets were always something we admired. Some of my fondest memories are of the Disneyland arcade. Living in southern California meant that we went there quite a bit; our school had an annual Disneyland trip and we’d often go during our school breaks. We’d always want to ride Space Mountain first and once you exit the ride, there’s the two-story Tomorrow Land arcade so of course we’d spend an hour or so playing videogames. They had all the deluxe cabinets for Space Harrier, Out Run, Thunder Blade, After Burner, and Hang On. I didn’t always want to spend the money to play the deluxe cabs, but when I did, it was special.

For me, these games are what helped make Sega great. They made other games before these, but these are the games that made me love Sega. I also feel that their “physical experience” deluxe arcade cabinets are iconic and I wanted to start with the first ones. After Burner II and Hang On should be included, but I was having difficulties building the Hang On motorcycle out of bricks, and I could tell it would take a long time to get After Burner right, so I decided to just start the project with the three I had already completed with the hopes that I’d be able to build the rest as the project gathered support. Life got busy though, and I wasn’t able to work on the extra cabinets. If the project gets past the review stage and is chosen to be made, I’ll suggest including After Burner II and Hang On since they were always meant to be included in the set.

What led you to include Yu Suzuki as a minifigure?

Yu Suzuki is a videogame legend, and these (with the exception of Thunder Blade) were some of his first games with Sega, so I felt he was a must-have, just to sort of show respect for what he’s done for videogames and Sega as a whole.

In your demonstration photos we can see Ryo Hazuki trying out the machines. Are you a Shenmue fan? If so, what was your reaction to last year’s announcement of a Shenmue 3 Kickstarter?

Yes! I often cite Shenmue as my favorite videogame of all time. I daydreamed about playing a game like Shenmue as a child (albeit in the Robotech universe) – that scope, that attention to detail, and the open world was the stuff my videogame dreams were made of. The announcement of Shenmue 3 was unreal; I thought it was a joke or something, because I just couldn’t believe it. I’m so glad it’s happening though! Ryo Hazuki was actually one of the minifigures I wanted to include in the set initially, but I felt that that would just be yet another license Lego would have to acquire and I thought it might hurt its chances of getting made. This was all before the Shenmue 3 announcement, and at the time, I just didn’t realize how many Shenmue fans there are. In hindsight, it was a mistake not to include him. If the set passes review, I will request that Ryo Hazuki be one of the minifigs.

What would it mean to you to have this proposal accepted by Lego and turned into a real product?

We’ve recently seen Sonic the Hedgehog featured in Lego Dimensions. Do you think that may ease the way for Lego to license the properties required from Sega to make your proposal a reality? And could it possibly form part of an even bigger partnership between the two companies on future releases, both physical and digital?

Yes, I think it shows that Sega is open to working with Lego and if this set gets made it could pave the way for more Sega themed sets. If they do obtain the licenses for these games, I could see Lego wanting to add them to Lego Dimensions, maybe in the same way they did for their Midway Arcade Level Pack which featured games like Spy Hunter and Defender.

Lego recently made headlines by responding positively to an online campaign. Would you like to see Sega follow suit and grant the fans’ persistent requests to #SaveShenmueHD?

Oh heck yes! I would love to play Shenmue I and II again in HD, but to be honest, my faith in Sega is not as strong as it once was and I have a hard time believing they will do it. I would love to be proven wrong though.

Can you tell us a little about yourself, outside of your passions for Lego and gaming?

I’m married and a father of two little ones, so family has become a big focus over the past couple of years. In college, I studied art with a focus on drawing and painting but I’m currently doing web and design work for a software company. I used to want to be an artist/animator for videogames and even got to work on a Game Boy Color game during my college years. Unfortunately, the game was never released even though it was 99% done (the Game Boy Advance just came out, so publishers were moving towards that platform). I also took a stab at being an actor, which was a fun experience but it was hard to pay the bills since I wasn’t in a union. I’ve always been a big Star Wars fan and also collect toys. You can get a glimpse of what I’m into if you check out my Instagram feed.

With a young family now do you anticipate daddy having to ask nicely to play with any Lego bricks in future?

Haha, I hope not! I plan to have my pile of Lego and the kids will have their pile of Lego, and when they grow out of it…

Any last comments for readers of this interview?

If you’ve supported the project – thank you! If not, please try to check it out and support. If you’d like to see other Lego stuff I’ve built, please check out my Lego Facebook page. Also, thank you to James and Team Yu for their continued support and promotion of this project! 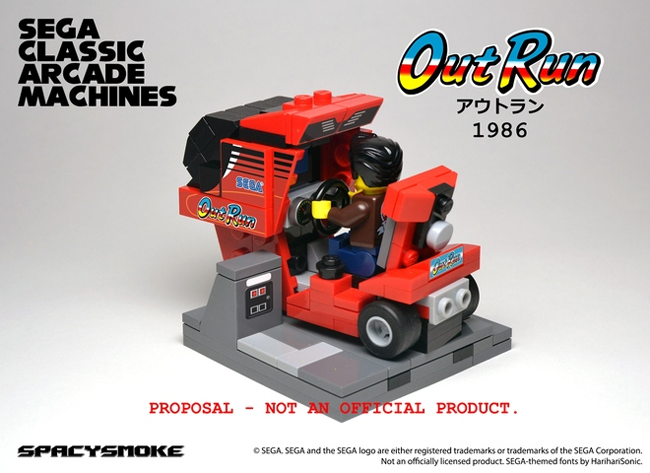