In The Line of Fire is one of the more exciting Kickstarter projects we’ve seen in quite some time. Of course, we all know the Dreamcast seemingly receives new games all the time, but this project has two thing that make it different from the others. First, it’s actually new 3D game for the Dreamcast, which is a rarity these days, and, second, if it reaches $100,000, it will include online multiplayer.

Militia Dev Studios sent us a demo of the game, and we had the chance to be one of the first to play it on Dreamcast. Even as it’s just a demo, it’s clear that the indie Dreamcast games are reaching the highest level. If you enjoyed other Dreamcast shooters like Half Life or Soldier Of Fortune, you really should have a look at this project. 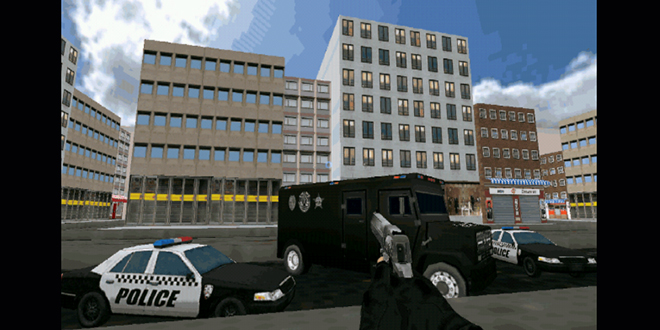 A veteran swat team is dispatched to Goldguard Bank to stop a robbery. Despite the team’s valiant efforts, they failed to complete their objective and were massacred “in the line of fire.” Get it?! *snickers* You take on the role of a rookie SWAT team member, who must hunt down the criminals responsible for the Goldguard Bank heist and the murder of your fellow officers. Little do you know,  though, Goldguard was only the beginning.

You begin with a basic skillset and weapons, but as you progress through the game completing missions, you’ll level up your character’s skills, weaponry and rank. Eventually, you’ll become a commander with the authority to pick other SWAT team members and use their unique skill sets. In addition, to an intense story mode the game also features split-screen multiplayer mode featuring numerous game modes including death match and king of the hill.

In The Line of Fire is an upcoming Dreamcast game by Militia Dev Studios built from scratch using the DC3D Engine. This engine is designed from the ground up to allow the developers to push the Dreamcast hardware to new limits with software support of modern 3D modeling programs, such as Blender, 3DStudio Max, Maya and more. In its current state, the engine is fully functional, and there are plans to continue improving some of the systems currently used by the engine to gain extra performance.

Built from scratch with the DC3D Engine
1 huge hub world with over a dozen unique levels
Real-time 3D combat engine
Jump, Dash & Fight in responsive environments
Pick up and throw objects at enemies
Customizable characters with in-depth class/job system
Smart audio system that is influenced by environment with 3D positional sound effects
Over 20 ambient and pulse pounding tracks by Richard Evans
Save file tool to easily move between platforms