Fire & Ice represents the best game in the Sonic Boom series, but that's not saying much.

[dropcap]T[/dropcap]he Sonic Boom series has not been very well received, historically. Rise of Lyric on the Wii U was unanimously detested, and its 3DS counterpart Shattered Crystal didn’t fair much better critically. I made a very conscious choice to leave Sonic Boom‘s reputation behind me and check my expectations at the door as I booted up Fire & Ice.

After the credits rolled I asked myself, “Did SEGA and Sanzaru Games learn their lesson and produce a worthy sequel?”

The answer is … Kind of.

Sonic Boom: Fire & Ice does have it where it counts: it’s fast and it’s fun to play. For those of you who 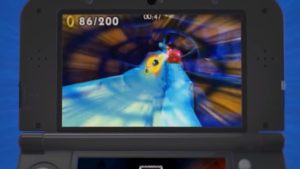 didn’t play Shattered Crystal, the learning curve is minimal, and you’ll be dashing in no time. You’ll control Sonic or one of his four companions with the circle pad. On their own, they actually run pretty slowly.

Pressing Y to initiate a sprint gets things moving along (I realized hours into the game you don’t have to hold it down), and as you traverse through each level, you’ll automatically lock on to any nearby enemies or obstacles for quick, mid-air dash attacks. You also have your trusty EnerBeam, which allows you to swing from special hanging platforms.

You’ll find that each course is very cleverly laid out with speed in mind. Enemies and obstacles are carefully placed and spaced in such a way that you’ll be chaining together multiple homing attacks to zip and bounce from one spot to the next. There are also plenty of speed gates to run through which initiate impressive automated sequences where you’ll watch Sonic traverse a veritable circus of twists, loops, and bounce-pads to get to the next area.

Every stage will reward you for finding all of the collectibles, and you’re rewarded by beating a certain completion time target as well. Speed-runners will have the most fun with Fire & Ice, as it was perfectly clear that each course did in fact have one ideal path that you could master after you memorized the stage and honed your reflexes. I attempted speed-runs on a handful of stages, and was impressed by how fast Fire & Ice can play.

New to this iteration of Sonic Boom is the Fire and Ice mechanic. By clicking the right or left shoulder button, your character will be surrounded and empowered by one element or the other. In every stage are massive cubes of water or ice. When your path is blocked by ice, you’ll have to switch to fire mode to melt the ice and pass through. Sometimes, you’ll have to do this at a moment’s notice as you’re flying through the air or when you need to melt the ice beneath you to escape an oncoming obstacle. Other times, you’ll see platforms of floating water which must be frozen to reach new heights, or you may see a fount of water streaming over deadly spikes that you’ll have to freeze and glide across. 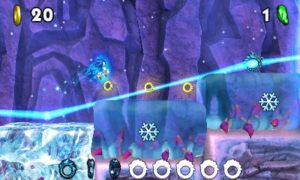 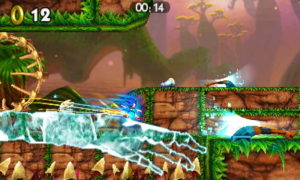 It’s a pretty neat little twist, but it’s never fully realized. The same few tricks and trials you’re presented with in early stages just keep repeating throughout the rest of the game. Look, there’s another stream to freeze and glide across. And there, it looks like another massive block of ice to melt and run through. Even during boss battles, which are insultingly easy and anticlimactic, the Fire and Ice mechanic is used too simply.

The only time this game’s namesake feature feels thrilling is when you’re attempting speed-runs or running side races. The problem there is that switching to one element and back again is not an instantaneous action. There’s a small dead period right after you switch elements that will get anyone with an itchy trigger finger killed. If you switch to the wrong element right before hitting an obstacle you’re pretty much screwed, even if your reflexes are fast enough to tap that shoulder button again.

It’s not blazing any new trails… 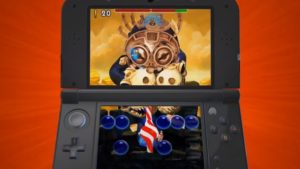 Perhaps my biggest gripe with Fire & Ice is that it plays it too safe. This is basically the exact same game as Shattered Crystal. You’re controlling the same characters (plus Amy) who have the same special powers, and the stages play out very similarly – Fire and Ice blocks excepted. The side stages are the same as well, with mobile-style runner courses (my favorite), vertical shoot’em’ups and boring underwater mazes. The similarities aren’t such a bad thing, mind you, because gameplay in Shattered Crystal was good. It’s good in Fire & Ice too, but it’s not great, and nothing feels new. Boss battles could have made the difference, but they play out too plainly to be innovative.

Fire & Ice also leans heavily on the meme-rich humor and campy dialogue that Sonic Boom is known for. Some youngsters may like it, but it’s not my cup of tea. The story is terrible. Eggman is mining a rare element called Ragnium, which he’s using to create a robot that can run faster than Sonic. His mining, for some reason, is causing fissures to erupt and spew fire and ice. Those fissures could destroy the world. That’s the plot.

At the very beginning of the game, we see Sonic and Amy discover one of these fissures, and both of them, with zero explanation as to how or why, become imbued with the powers of fire and ice. Those powers are stored in their communication bracelets so, naturally, Tails figures out that with a few simple button clicks on his own bracelet, he can give the entire team the powers of fire and ice. How does that work? I s#*t you not, his explanation is, “Because science.” Someone, somewhere, will think that that’s hip and funny. I thought it was lazy and disappointing.

Look, the words “Sonic Boom” don’t evoke confidence in anyone, but Fire & Ice really is a fun game. The corny cutscenes and copy-and-paste level design were a little disappointing, but I did enjoy myself every time I booted up the game. If you can catch it on sale or get it for 20 percent off through Amazon Prime or Best Buy’s Gamer Club Unlocked, I think it’s worth playing, especially if you’re a Sonic fan. I’m not sure I can recommend it at its full price as the game is extremely short (about five or six hours, depending on how you play) and repetitive in its design. 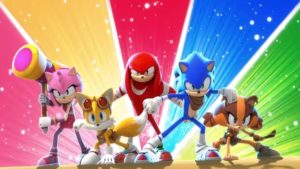 What else can I say? This game isn’t bad. It’s good, but not great. Fun, but not a must-play. Fire & Ice represents the best game in the Sonic Boom series, but that’s not saying much. Devoted Sonic fans will probably love it; it’s fast, fun, and features some great tunes from industry vet Richard Jacques. Hardcore platformer fans may find the game a little too short and lacking in depth and innovation. If you’re looking for a quick Sonic fix while you wait for Sonic Mania, this may hit the spot, but keep your expectations modest. 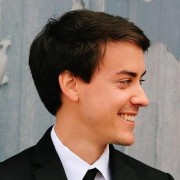