So a couple days ago, an announcement was made that Japan would be getting SEGA Fukkoku Archives 3 FINAL STAGE,  a bundling of the missing SEGA 3D Classics titles, just like the SEGA 3D Classics Collection that the US and other countries got.  Also announced was that a final game,”decided by the fans” would be included.  This sparked some speculation,  with fans debating on what the game would be.  Some said Virtua Fighter, others said maybe even Virtua Racing or Golden Axe.  Well, thanks to a good friend on Instagram (outrun_86), we finally know that this secret game will be the 1989 classic, Turbo OutRun. 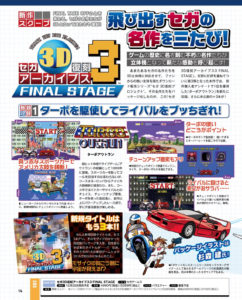 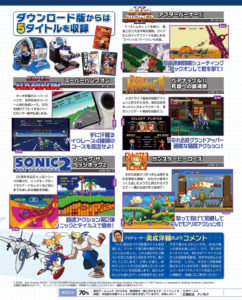 Originally an arcade release,  Turbo took the original OutRun formula and changed it slightly,  where instead of you branching multiple paths, it was a point-to-point race, taking place in New York, and  finishing off in Los Angeles.  Included was a tuning parts system that would award you parts to help your car’s performance in later stages.  Turbo OutRun still holds up as one of the greatest OutRun games,  with it’s great soundtrack,  and bitchin’ Ferrari F40.  Oddly enough,  Turbo did get a home release on the Mega Drive in Japan and Europe,  but nothing close to the arcade version was released,  minus the FM Towns Marty port. 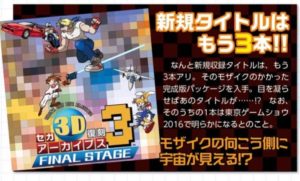 Also worth mentioning is the hidden artwork that is being used for Fukkoku Archives 3.  As Turbo OutRun was but one of the secret games for the collection,  looking at the pixelated cover in this Famitsu spread,  it seems like there will be more hidden games coming to this collection.  My money’s on one of the three: Alien Storm, Golden Axe, or Bonanza Bros.  All three of these games have been hinted at in the endings of some of the 3D Classics, so it makes sense.  Here’s hoping this gets an international release though.  Considering both Sonic the Hedgehog 2 and Streets of Rage 2 are in this collection, I wouldn’t rule it out entirely. If it doesn’t get a US release though SEGA, can we at least have a downloadable version of Turbo OutRun?  I’m sure the original OutRun wouldn’t mind having it’s arcade sequel next to it on the 3DS. 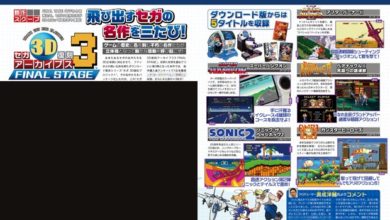 August 30, 2016
Check Also
Close
FOLLOW US
Use code SEGA at checkout to get 30% off EwinRacing gaming chairs