D can only be recommended to patient gamers who already have a love of point-and-click adventures.

Kenji Eno wasn’t afraid to take risks. His company, WARP, embraced controversy. They were eager to experiment, bending genres as they saw fit.

Strangely, their first title, D, didn’t showcase much of their trademark controversy or originality. The gameplay was simple, the story thin and the scares cheap. With Night Dive Studios’ re-release of the classic DOS version, it’s the perfect time to reflect upon what was undisputedly a flawed, but very charming, production.

Laura Harris races to Los Angeles. Her father, Richter Harris, has murdered dozens of people in his hospital, seemingly without motive. The police ask Laura to go inside and convince her father to stop his spree. Upon entering the hospital, Laura is transported to an alternate dimension. She finds herself lost inside a psychedelic castle riddled with traps.

Dr. Harris appears as an apparition, trying to warn Laura of the impending danger, but vanishes before he can deliver his message. Laura sets out to find her father and solve the mystery of the realm she finds herself trapped in. 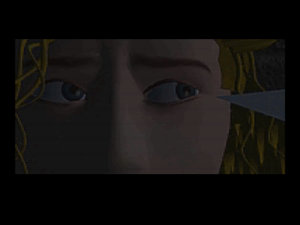 D is played from a first-person perspective. Using the directional keys, you can make Laura turn or walk down pre-determined pathways. When you are facing a point of interest, you can attempt to interact with the point or object at hand. You can also bring up your inventory and review your collection at any time.

Boiled down, D‘s mechanics are quite simple. All items and points of interest lye within the set routes. The challenge comes in trying to unravel the order in which to explore the castle’s various rooms, and discover which keys unlock which doors.

D won’t be much of a challenge for most seasoned adventure gamers. However, the twist of having a time limit does add a does a sense of suspense and helps, at least artificially, increase the difficulty.

Though the game has plenty of traps and pop-up scares, the only thing that can actually harm Laura is time. Compared to other genre greats from this period, D’s riddles are simple and solvable within the time limit. Puzzles vary from combination to memory, challenging different parts of the brain every few minutes.

The game’s areas are not overly large, and getting lost is never a concern. Fixed pathways ensure D’s focus stays rooted in puzzles and horror rather than pixel hunting.

Laura’s aforementioned walking pace is the game’s biggest problem. It is likely WARP chose to have Laura walk so slowly to build suspense. This trick succeeds for the first few minutes. However, it quickly becomes tiring. Waiting for Laura to pace back to a room you want to re-explore, or turn a handle four or five times, can be absolutely grating on the nerves. D creates anxiety with its pace, but for the wrong reasons. 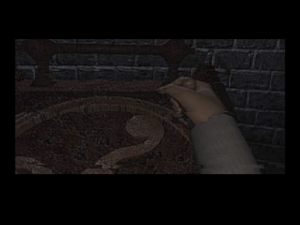 D has multiple endings depending on your route and choices throughout the game. If you fail to reach the end before the allotted time, a short video plays showing the portal close, trapping Laura in the realm. If you manage to find Laura’s father, you will have to make a choice resulting in one of two alternate endings.

While going through the game multiple times just to watch two short clips may seem onerous, D does have some replay incentive. Hidden throughout the game are four beetles. Each beetle provides a flashback to Laura’s past. The story, even with all four cutscenes, still doesn’t amount to much. But the allure of finding every hidden beetle while still completing the game within the time limit will no doubt tempt completionists. It also unlocks a slightly different alternate ending to the game. 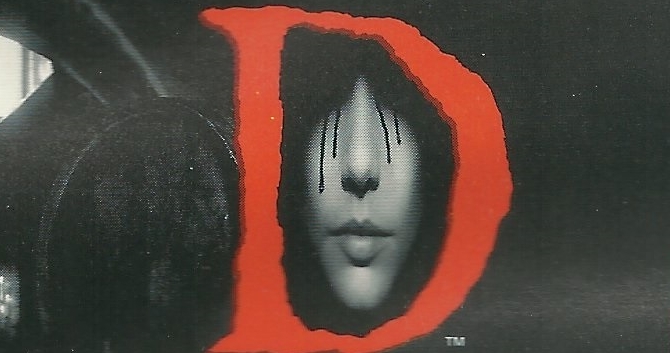 D alludes to early 20th century horror films with its classically influenced art direction and setting. The pixelated graphics give a little of that Silent Hill effect, building insecurity via their messy contrast.

D‘s folly and sound effects are wonderful. The soundtrack, though reserved for a scarce few occasions, is quite nice as well. Unfortunately, bad sound mixing often dilutes the intended effect. The game’s main theme was written by Eno. While his score in D is not as memorable or present as it would be in D2, it is an interesting showcase of the man’s many talents.

D is an undeniably interesting game. Whether it’s a good one is up for debate. It’s definitely the most vanilla of WARP’s productions. Patient gamers who like horror/puzzle themed adventures will enjoy D.

Nightdive’s port doesn’t boast any major updates to the visuals or content, but it is a nice alternative for those who don’t want to spend triple digits on a console copy of the game. D fails in some aspects of its execution. But its intuitive design and thick atmosphere make it enjoyable for the short time you spend with it. 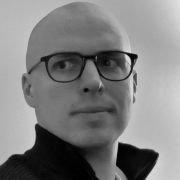 I like my martinis dry and my shooters on-rails. 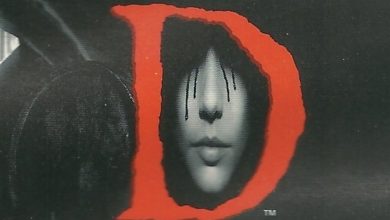 The Saturn horror classic “D” is now available on PC 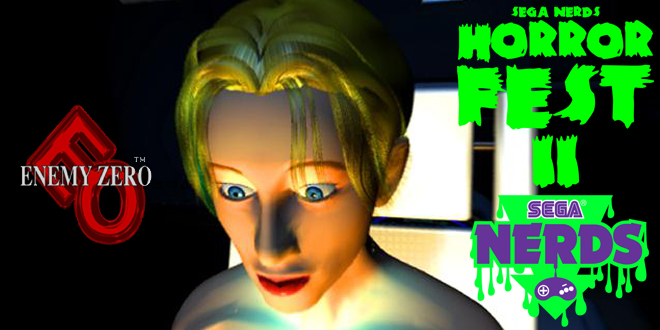