Fans can find plenty to enjoy in Superman, but there are too many odd design choices and it is far too difficult to recommend highly.

To commemorate the release of Batman v Superman in March, we’re celebrating by cramming the site chock full of SEGA-related Batman and Superman content. Today, I’ve got Superman duties, so let’s see how truth, justice, and the American way fare in Superman’s first SEGA Genesis title. I’m betting they all suck! Pfft! America, am I right?

In my office, Kent!

The succinctly titled Superman was developed by Sunsoft and released in 1992. It European release was blessed with a slightly more interesting title, Superman: The Man of Steel. Why did us yankees get the more boring title? Nobody knows, but I’d like to introduce the conspiracy theory that the United Steelworkers union somehow blocked the game being released under the cooler title. Unions. Bah! Can’t live with them, can’t work in some states without giving them money. (#RightToWork)

Superman is essentially a 2D platformer with a few flying sections to mix things up a bit. You control the last son of Krypton through five, yes, count them, five stages, as you make the world safe by defeating some of Superman’s most iconic foes.

Did I say iconic foes? Forget that. Because while one might expect for Superman to duke it out with the likes of Lex Luthor, Bizarro, Mongul or Darkseid, instead, gamers get to go toe-to-toe with the Prankster, Metallo (that’s not too bad), some rocket pack blonde-haired guy who even I can’t place as a canonical character, and Mr. Mxyzptlk (Some guy at Nintendo told me that’s dragon for “bad localization”).

At least the final villain is Brainiac, which is cool, but why, with only five stages to work with, did the developers feel the need to scrape the absolute bottom of the barrel of Superman baddies is beyond me. (#GOPprimary)

Each stage is broken up into smaller sub-sections, though most of the time you are running, platform-jumping, and punching enemies. Superman has the odd ability to damage enemies with his fist when he jumps up, and then with his foot as he comes down, which makes for a sometimes useful but typically awkward feeling attack. Otherwise the controls feel pretty solid and Superman himself, though a slightly smaller sprite, animates really well. The enemies are less detailed and pretty generic, though. (#BadGuysMatter)

Unfortunately, the player does not get the choice of when Superman flies. (#KeepYourLawsOffSuperman’sPowers) There are particular sections of stages where Superman flies automatically, including both horizontal and vertical scrolling scenes. Superman is still sadly grounded most of the time, which is a real kick in the pants to players wanting to get their up, up and away on. During the flight sections, Superman adds heat vision to his arsenal of weapons which essentially transforms the game into a shooter.

You don’t always have access to the heat vision ability, though, which points us at one of the more annoying elements of the game. Superman has to swap abilities by grabbing certain multicolored icons in the game, such as a super punch, a spin drill, etc. You can only have one ability at a time, so if you need to have the spin to progress, you need to find the spin ability icon somewhere. It would have been far more user-friendly to simply allow Superman to have access to all of his abilities from the get-go, and possibly swap them in a pause screen. Instead, you have to constantly snag ability power-ups, some of which aren’t very useful.

More powerful than a wet copy of the Daily Planet… barely

That leads to another issue: Superman is weak as hell in this game. (#Jeb!) Don’t get me wrong, I’m not a guy who expects for Superman to be literally invincible whenever he’s thrown into a video game, because how boring would that be? The problem is that in addition to not having access to many abilities, Superman has to hit some obstacles far too many times, and while I don’t object in principle to lame villains like the Prankster being included in the game, how many times can the Man of Steel punch that guy in the face before he becomes human pudding? Give him some kind of device, or armor, or something! Your attacks simply don’t appear to have much impact, almost as though you could take away the cape, put a regular dude in the platforming stages, and it would make more sense.

And if the Man of Steel isn’t already feeling pussified enough, the game is harder than Darkseid’s Apokoliptic balls. You are afforded one life, and three continues. That’s it. (#ExtraLivesMatter) If you continue, you will start at the beginning of the stage. When I was younger, I was only able to reach stage 3 without cheating. As an adult, I can’t even get that far. If you have a Game Genie, the ability to save states, or a system like a Retron 5 with cheat codes available, you will enjoy the game quite a bit more. If not, this particular incarnation of Superman will only make you believe a man can fly if you throw your cartridge out the window in frustration. I guess being only five stages long, the difficulty adds a bit of replay value.

Stop the presses, Smallville! It’s not all bad news. I’ve already mentioned that Superman himself animates well, and I still enjoyed the actual task of running and punching stuff. There is some nice variation in the stages too, from running across rooftops, flying horizontally through space, busting up Metallo in a subway car, and vertically flying up a high rise. 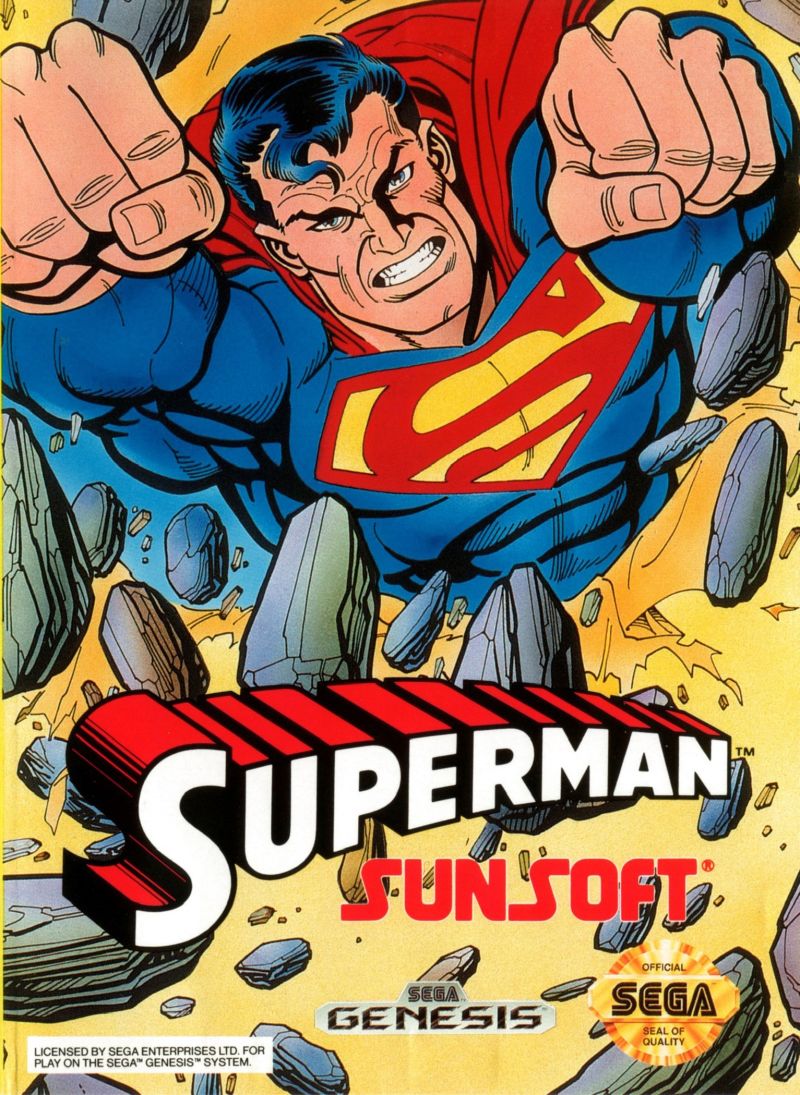 On the sound side, I really dig the soundtrack. Even the title screen captures the inspiring bravado of the best Superman themes, and many of the other tunes are quite catchy. The boss fight theme is my personal favorite. The sound effects aren’t all quite so snazzy. Your punch sounds like it has some heft, but your dinky heat vision’s “pew-pew” sound is super-lame. (#Berned!) The box art is also bad ass, if how your games look on your shelf matters to you. (#BoxArtMatters…? Okay, too much)

How you rate the man who has everything?

Overall, does the Man of Tomorrow hold up today? I should note that the initial magazine reviews of Superman were pretty harsh, though some complained about a game-breaking bug where the player was prevented from progressing if you grabbed the wrong ability power-up, and that meant it was the reset button for you! Sunsoft was actually able to fix this issue before the game shipped, however, but the damaging reviews were already sent to press.

As for me, I really enjoyed playing Superman when I was younger, even if I only made it a couple of levels in. A few tweaks like a better ability swap and a password or level select would have gone a long way, too. I do recognize my own bias, though. If a game has good music and decent variation, which Superman does have, then I will enjoy it. Superman is no exception.

Recommending it to someone else is a different story, though. I have to imagine that some Superman fans will still enjoy it for what it is, especially if a cheat device is available, but it will also make others want to fly off into their Fortresses of Solitude and cry.

That’s why I’m going with a “poor” rating on this one. It’s still far, far from the worst Superman game ever made, though it’s not the best, either. Superman is, at best, an average, short (about 40 minutes), ridiculously difficult game with a great soundtrack. There is fun to be had, just not in leaps and bounds.

Wow, it kind of hurt reviewing this one so low. I think I may need something to make me feel better…