SEGA has announced their financial report from the past nine months, and the good news is that they are in the black. SEGA’s operating income increased by 11.7% year-on-year, while sales dropped by 8.5%.

SEGA has also revealed their predictions for the full fiscal year ending in March 2016, with the operating income predicted to be lower than the expected income of March 2015.

SEGA went on to discuss their “robust” digital game sales, while acknowledging their lower sales for packaged games.

“With regard to the Entertainment Contents Business, in the field of digital game software, updates, etc. were implemented for existing titles for smart devices, such as “PHANTASY STAR ONLINE 2” launched over three years ago, “CHAIN CHRONICLE – Kizuna no Shintairiku” and “Puyopuyo!! Quest,” and sales remained robust.

Sales of “Hortensia SAGA” launched in the current fiscal year are also robust. However, with regard to the expansion in South Korea of “Football Manager Online,” a new online game for the Asian market, and certain titles for smart devices, advertising expenses etc. increased due to a review of the value of assets relating to titles that were less well-received than expected in the initial plan, as well as extensive updates of various titles. The number of titles distributed domestically in the field of digital game software (free-to-play types) was 50 as of the end of December 2015.

In the packaged game software field, sales amounted to 6,120 thousand copies, which was lower than the level in the same period of the previous fiscal year, despite the launch of “Football Manager 2016,” the latest addition to the “Football Manager” series, which has continued to attract diehard fans for over 10 years, mainly in Europe.”

Following their explanation for the current trends in sales, SEGA also explains their forecast for March 2016 sales.

“During the first three quarters of the fiscal year ending March 31, 2016, operating income and profit exceeded the forecast of consolidated operating results for the full year of the fiscal year ending March 31, 2016 as announced on December 4, 2015 as a result of factors such as cost improvement effects centering on the reuse of components mainly in the Pachislot and Pachinko Machines Business.

Regarding the digital game software field of the Entertainment Contents Business, the Company is consecutively implementing large-scale updates centered on major existing titles, including “PHANTASY STAR ONLINE 2” and “CHAIN CHRONICLE,” as well as planning the launch of a number of new titles mainly for the Asian market, and needs to monitor the progress of such initiatives. As a result of the above, no change has been made to the forecast of consolidated operating results for the full year of the fiscal year ending March 31, 2016 as announced on December 4, 2015.”

The actual reports can be seen below. 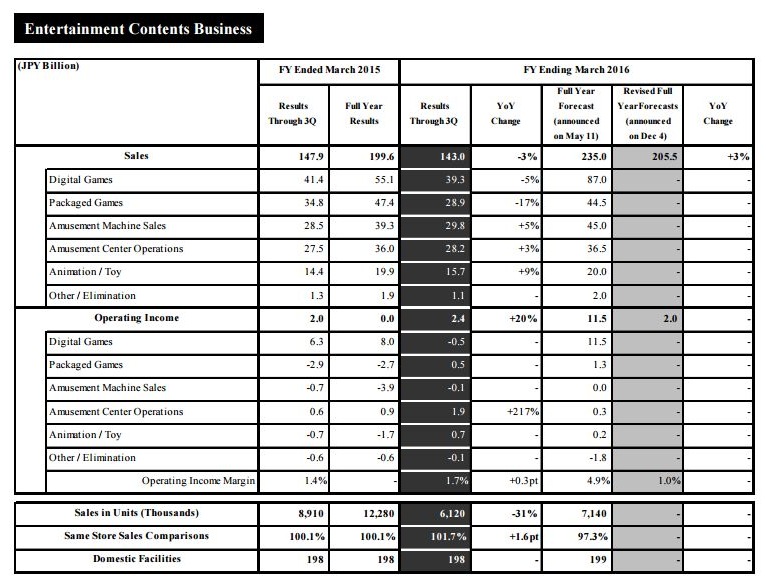 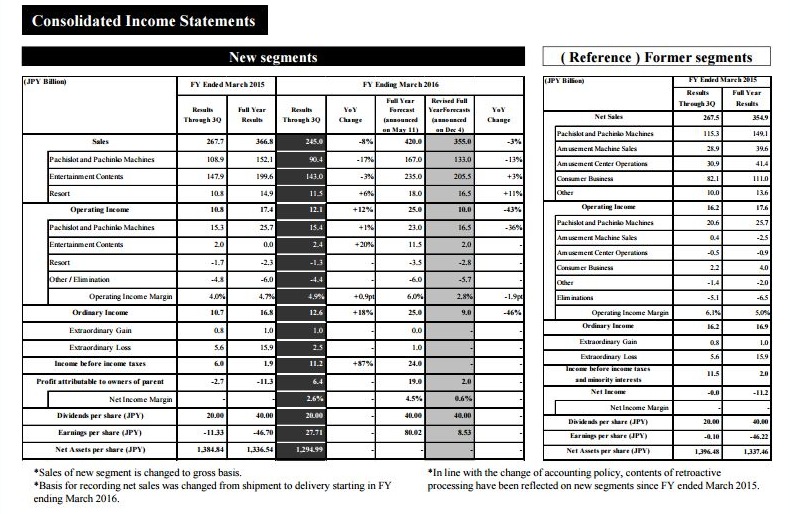