It’s worth noting that this article contains impressions from the recent trial version of Ryu Ga Gotoku (Yakuza) 6. This short preview was bundled with the release of Ryu Ga Gotoku Kiwami (Yakuza Extreme) and became available for download on the 28th of January, 2016.

The trial demonstrates the technical abilities of the Yakuza teams new game engine and contains scenes that will not be included in the final product. A second demo, which will include a better representation of the content included in Yakuza 6, will release closer to the games launch date of “fall” 2016. 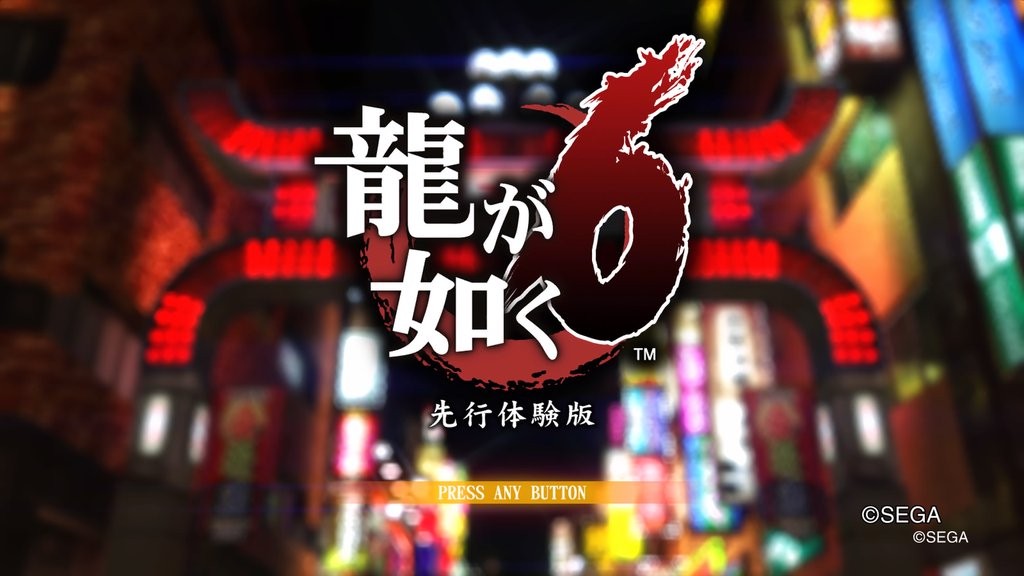 The Ryu Ga Gotoku (Yakuza) video game series is a decade old this year, and is in desperate need of some changes. While each title brings an exciting new tale to the fictional depiction of the Japanese mafia, the series has grown too formulaic. Even after updating the game engine back with the release of Yakuza 5 in 2012, it can be said that the series has not evolved since the launch of Yakuza 3 in 2009 (or perhaps even since the Japanese only Yakuza Kenzan! in 2008.) Despite the addition of new mini-games, additional fighting styles and updated skill trees, the game systems have become stale and feel reminiscent of an era gone by.

Thankfully, the Yakuza team have realised this and with Yakuza 6, they have set out to change things. 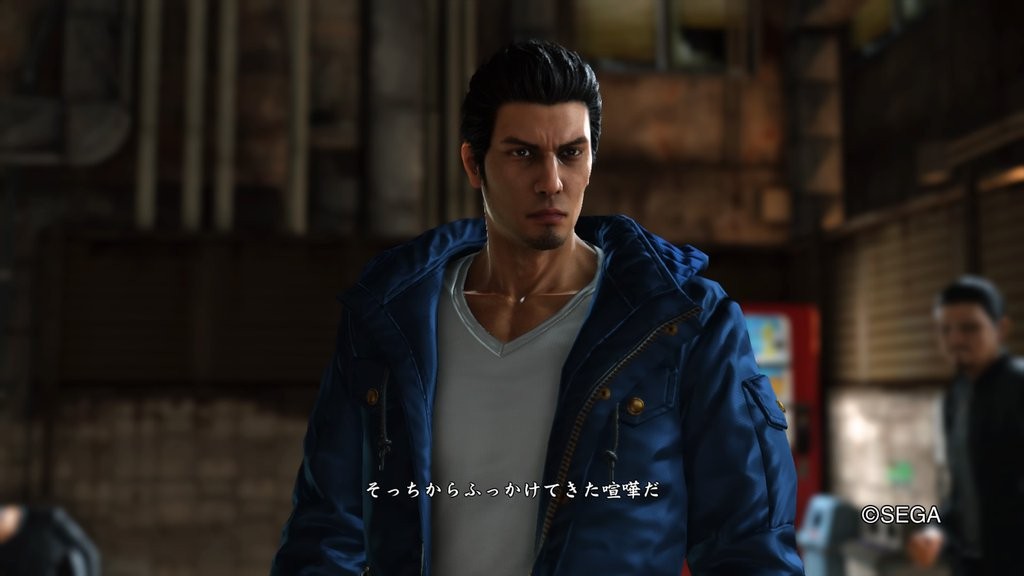 We’re back in the fictional city of Kamurocho. The camera pans across a gorgeous looking street, with impressive depth of field effects and environmental lighting. Veteran fans of the series should immediately recognise where they are – back where it all began, in the alley behind New Serena. An oddly young looking Kazuma Kiryu appears, confronted by several shady looking Yakuza. After a brief exchange of words, one swings a punch in Kiryu’s direction, only to miss. The game seamlessly transitions from cutscene to gameplay, and the beat down begins.

Right from the word go, things feel much different here. Kiryu now controls sluggishly, and his attacks feel far more vicious than in previous titles. Each punch is swung with a great sense of weight and momentum. The sounds of the hits and kicks connecting with Kiryu’s unfortunate opponents really pack a punch. The game camera zooms closer to the action, showing Kiryu pummel his enemies in the face with much greater detail than before.

In addition, one of the series battle systems biggest staples, the HEAT actions, have also been redesigned. HEAT mode is now built up and activated by the press of a button – R2. When activated, players can add additional hits to their heavy attacks for a limited time, dealing more damage to foes. As a result, the action now flows far better, with little to no jarring camera cuts. Gone are the ridiculous (but entertaining) HEAT actions. The combat feels “raw” as a result, but it works in the games favour.

There is the strong feeling of a very different Yakuza here – a grittier, darker Kamurocho. As the battle ends, Kiryu is joined by a friendly non-playable character and the pair rush out of the alleyway and into the street. The action doesn’t stop there – after meeting with a few friends, a rival group of Yakuza appear in a whirlwind of black cars. The foes scurry out of their vehicles, and walk out into the street, towards Kiryu and his gang. As you would expect, a larger scale battle commences. 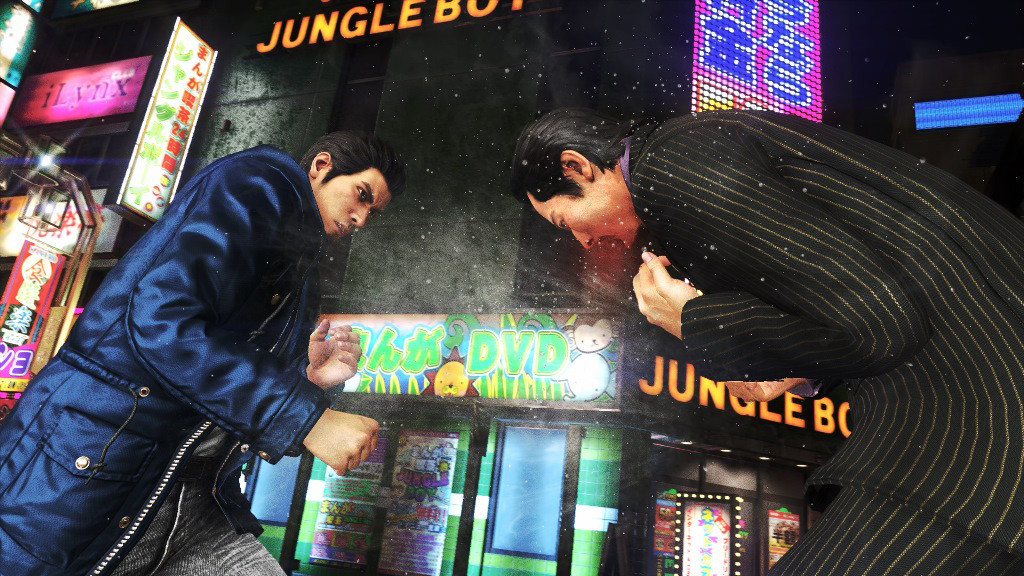 The Yakuza team have made an effort to lessen the heads up display, and now friendly and enemy life bars appear above the character’s heads on-screen. Adjustments have also made it across to the games overhead map too, which bizarrely, now appears larger than ever.

After the fight ends, Kiryu encounters a higher rank Yakuza dangling a friendly character out of the top floor window of a nearby building. The transition into this encounter from gameplay is seamless, with no camera cuts or fade to blacks. The Yakuza team are definitely using the power of the PS4 to their advantage here and it’s a welcome change from the way the previous titles handled such scenes. 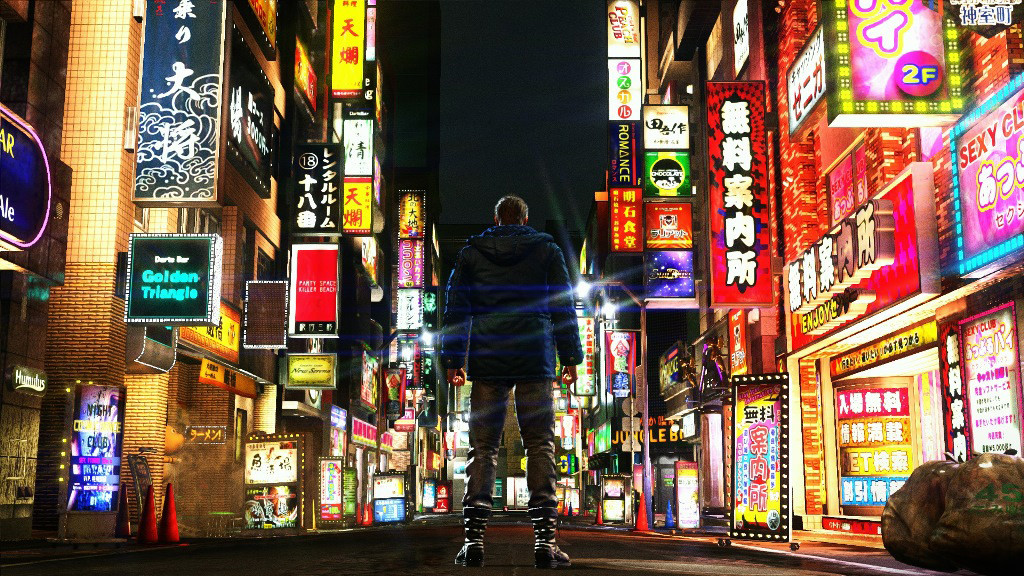 After the cutscene ends, Kiryu storms through an office building, only to come face to face with the tough looking high rank Yakuza in a series staple – a tense rooftop fist fight. The traversal up said building is something special. As with the battles and cutscenes, there are once again no load screens. Kiryu opens doors, climbs all flights of stairs and chases the Yakuza across the maze of pipes and vents awaiting them at the top. The game world now feels much more connected than before.  A living, breathing city. This is a delightful change for those who already know the city of Kamurocho inside and out.

From here, the demo opens up. While only a small section of the city is available to explore, Kiryu can partake in a handful of activities from previous games. There are of course, some surprises on the way. Fancy a visit to the games fictional supermarket chain M-Store? In Yakuza 6, you may get more than you bargained for, as local Yakuza are holding a knife to the shop assistants throat. Kiryu steps in without any hesitation and proceeds to lay the smackdown inside of the store, a series first. These little surprises are a welcome addition to the game world and will hopefully be used sparingly throughout Yakuza 6, as not to become too predictable. 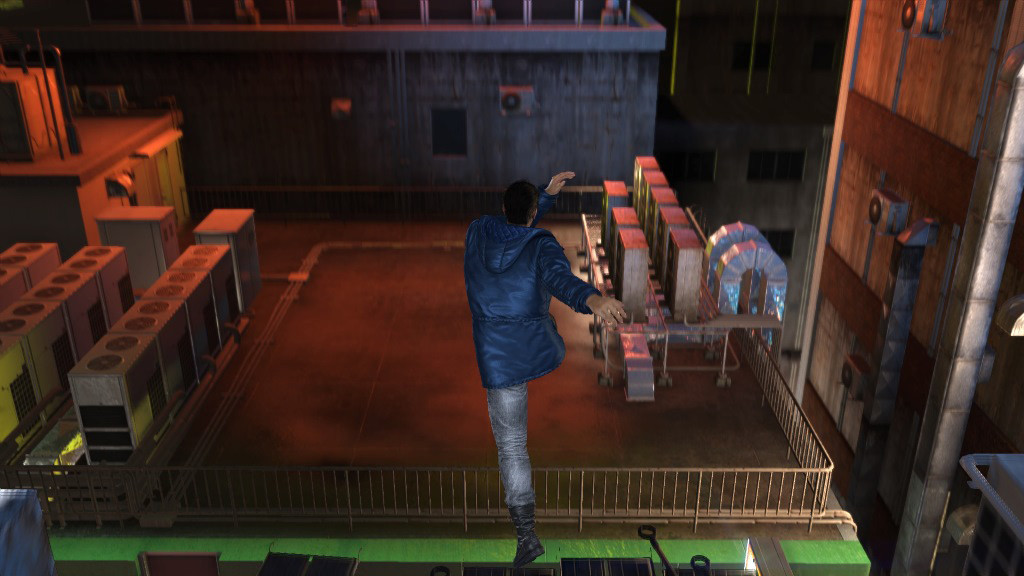 After beating the Yakuza goons, Kiryu is rewarded with an energy drink for his troubles. Players can hold down the circle button to take a swig of the drink, replenishing the hunger meter and health bar. This is actually the second energy drink found throughout the demo – the first being locked in a lootable safe found on one of the floors inside the large office building from earlier. Kiryu is not required to finish the drink all in one gulp, and happily holds the can in his hand as he wanders around the city streets. It is uncertain whether or not this will be the case in the final game, but the item screen has disappeared in its entirety.

The hunger meter does more than keep Kiryu’s belly full of smile burgers and energy drinks. As Kiryu stuffs his face, the meter builds up. The closer the meter is to a value of 100, the more bonus abilities become available during battles. It’s possible to over eat, but during the play through of the demo, negative effects as a result of doing this were not observed. 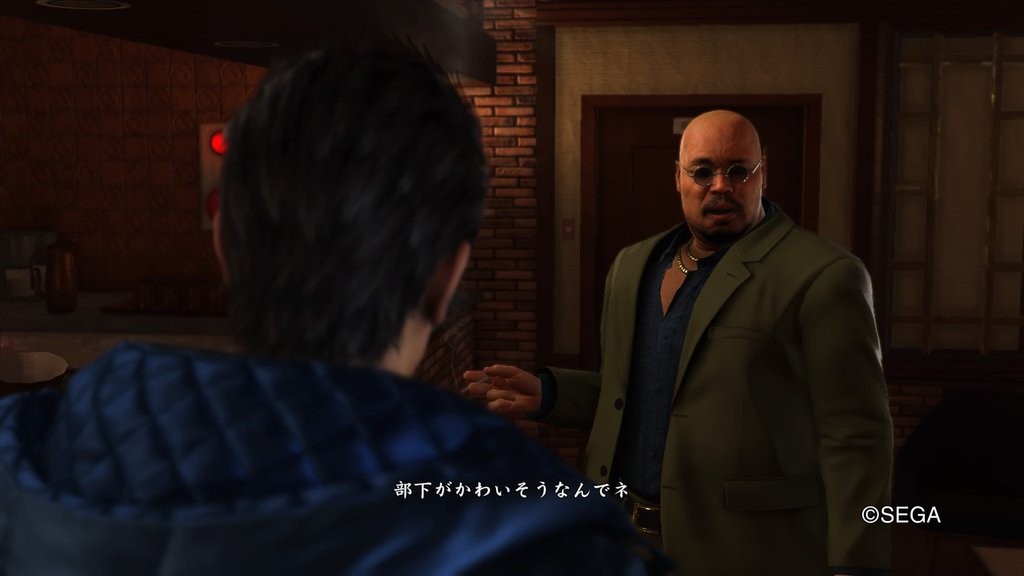 After wandering around the city, fighting rival Yakuza and passing the local karaoke parlour (which is sadly not accessible here), Kiryu comes across a female non-playable character. This triggers a sub story, which involves Kiryu beating up some punks on the top floor of a smile burger fast food restaurant. Unlike previous titles, the substory includes full voice acting, an extra effort that despite the huge undertaking, will hopefully make it into the final game.

The demo ends with a boss fight in a familiar location – Café Alps. As Kiryu enters the establishment and chats with a portly Yakuza vaguely resembling none other than the great Doctor Robotnik himself, the high ranking Yakuza from earlier speeds through the café window on a motorbike a fight breaks out. This is easily the highlight of the demo, with a fun battle that has an excellent and exciting lead in.

A final cutscene brings a nice end to the demo, with a familiar voice heard calling out to Kiryu. It’s Haruka, dressed in her Yakuza 6 city gear and hands full with bags of shopping. The pair walk together into the heart of the city, side by side, like all of those years ago. 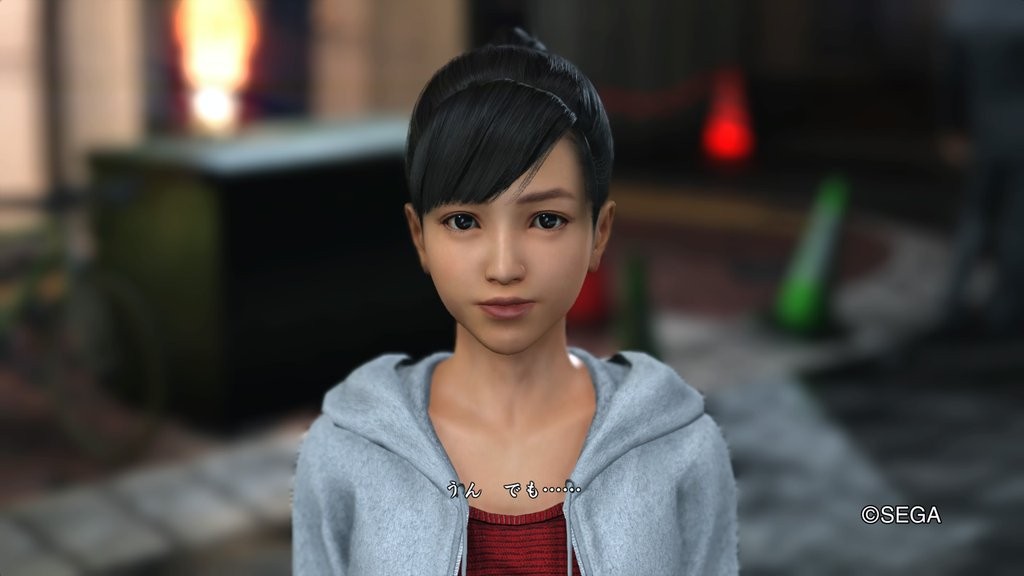 It is clearly still early days for Yakuza 6, but if what has been shown in this technical demonstration is anything to go by, things are looking promising.

Despite all of the positive changes, the demo is not without some issues. During both traversal segments and the battles, the camera can feel as if it is fighting the player, and often needs manually adjusting to point away from a wall that is obscuring the entire screen. Kiryu’s new animations when walking around the city certainly look much nicer than before, but still feel a little rough, especially when navigating through smaller, crowded spaces. The in-game physics can also behave rather strangely, with enemies flying up into the air and objects smashing as Kiryu brushes up against them. It’s oddly entertaining!

With still months to go until the games release, there is plenty of time for the Yakuza team to add the extra layer of polish needed. It almost feels like a crafty marketing campaign, releasing the demo of Yakuza 6 around the launch of Yakuza Kiwami. This is as Kiwami still has the same old problems as previous entries in the franchise, while the Yakuza 6 demo addresses a lot of these issues. Clearly the PS3 version of the game is holding Yakuza Kiwami back from being something great. Going between the two different games is like night and day – and that’s certainly something the development team of Yakuza 6 would be proud of. It feels like a fresh new start that the series so desperately needs. 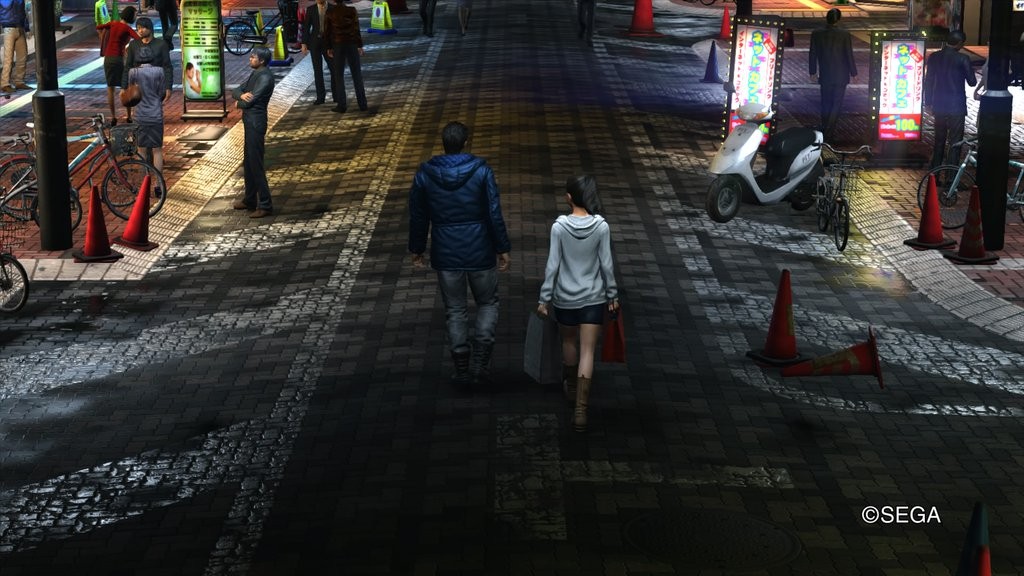 What has been shown of Yakuza 6 so far is technically impressive and a step in the right direction for the franchise. We’re excited to see how the final product fares as we TURN UP THE HEAT this fall!