If you remember back in the end of December,  I had covered a demo of a Kickstarter game called Slipstream by Noctet Studios. So far, it’s been a damn good looking project, attempting to emulate sprite scaling racers, such as Chase H.Q. and SEGA’s own OutRun.

After playing the demo and really enjoying it, I was even more confident it would be a solid title, but others apparently didn’t agree with me. Today, Noctet Studios announced big, fundamental changes to the game after getting feedback that the game looked dull and boring. 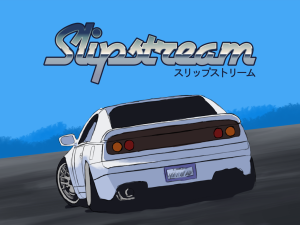 “To counter that, I’m gonna add more action-oriented mechanics to spice things up,” wrote Sandro, one of the owners of Noctet Studios. “I have brainstormed a few ideas, explosive crashes, maybe some kind of shooting, I don’t know exactly what it will be (maybe all of them), but I’m gonna try to add everything I can in terms of variety.”

I understand how some people are bored of the “retro racer” thing as it’s been done before, but I’m questioning the “action-oriented mechanics” that were mentioned. I mean, Slipstream was a really fun experience to begin with, especially with the drifting mechanics. It would be pretty cool to see some Chase H.Q. like gameplay added, though, like chasing down vehicles and ramming them, but I don’t know about adding shooting; it could work, I guess.

“Second, the art style. I was using too washed-out, pastel colors because I thought they looked more retro, but then I realized they just looked bad and I could do better,” he contineued. “I’m gonna remake all the graphics in a new style.”

From what it looks like,  Sandro is going with more of a “drawn” style of art, instead of looking like sprites.  It looks good so far, so let’s see where it goes from here.  I dug the art in the demo, and I’m digging the art here as well,  so far this game looks good.  Another thing mentioned on the kickstarter was the addition of a different course design.

“To fit the new graphic style and the new mechanics, I’m also gonna add crazier track concepts.”  It looks like Slipstream may go the Lotus/Top Gear route,  and have some crazy courses in addition to the normal stuff,  courses like driving through space and neon, cyberspace like areas along side other planets and crazy ideas like that.  I really like this concept,  as it breaks away from the mold,  and provides a damn fun change of scenery.

The last thing mentioned, was come changes to the reward tiers, and a thank you.

“Last, but definitely not least, especially for the backers: I’m going to make the $5 reward tier available to everyone. I believe the most rational decision would be for everyone who donated $10 to downgrade their pledges to $5. However, as you probably know, if everyone did that we’d lose a huge chunk of the funding and all hope for this kickstarter to succeed would be lost.

“So, for every irrational person who decides to stay on the $10 tier and above, I’ll offer all the rewards from the $15 tier + your name in the credits. Since this is big news, I’m gonna make another announcement focused exclusively on this part, to make sure everyone is properly notified.”

That was basically everything that was posted up on the kickstarter update today.  It looks like Slipstream has a couple changes to go through before it is ready.   With only eight days left in the kickstarter campaign,  it seems like a possibility that Slipstream may not make it to complete development.  Who knows though? It seems like a very promising project,  so I am keeping my hopes up.

You can check out our initial Slipstream review of the demo here.

Also, here is the link to the full Kickstarter update.