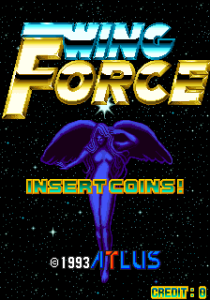 An unreleased Atlus arcade shooter that many thought was lost forever has just been discovered and released for the very first time.

Wing Force was developed by A.I and was originally planned for release in 1993 in Japan. Not much was known about the game up until recently, when ShouTime, an avid arcade collector, found a listing for the prototype board on an auction site and quickly purchased it.

The game plays similarly to Blaze On, A.I’s other arcade shooter it developed previously for Atlus. A.I would go on to develop games across multiple platforms, like Crossfire on the Genesis, Bonk 3: Bonk’s Big Adventure CD on the TurboGrafx-16 CD and even a few mini-games on Sonic Shuffle, according to SMS Power.

We haven’t seen the rom been made available to download as of yet, but you can go here to play the game now. Let us know what you think about this piece of video game history that we’re now able to experience for the first time!