Even with the slightly bumped down framerate, SEGA Ages: Power Drift is just as fun as the arcade original.

Well,  it’s that time again for more 3D Classics hype. With the rumblings that 3D Power Drift will be hopefully releasing at some point soon, it got me reminiscing about one of my all-time favorite SEGA racers.

When it comes to ports of this 1988 classic, you have a couple choices. There are the massive amounts of early PC ports, the PC Engine (Japanese TurboGrafx-16) version and even a port on the Dreamcast. Out of all of those, though, there’s only one that comes to mind for being the definitive Power Drift port – SEGA Ages: Power Drift.

Released in 1998 for the SEGA Saturn, SEGA Ages: Power Drift was one of the last few SEGA Ages games to be released, next to the Phantasy Star collection, Galaxy Force II, and the double pack of QuackShot and Castle of Illusion.  The SEGA Ages games were kind of like the SEGA 3D Classics of the past, being ports of classic SEGA arcade games for the Saturn. Their only downside was most never made it outside of Japan, minus a special three pack of OutRun, After Burner II and Space Harrier that was released for the Saturn in the U.S. So, for being a port that was exclusive to Japan, does SEGA Ages: Power Drift still hold up as one of the best ports? Let’s find out. 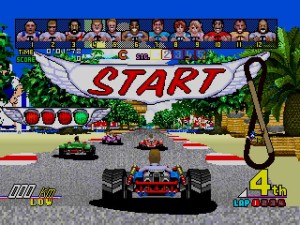 Power Drift,  at its core, is an arcade-style circuit racer, with a huge amount of courses to race through. The basic premise is to race a circuit of five different tracks, either winning or getting a podium finish to move on to the next track. There are five different circuits, each having five courses to race on, bringing the total to 25 courses in all.

Power Drift is pretty deep for an arcade game, it and relies heavily on course memorization to be good at the game. It provides a very fun racing experience, with up to 12 cars on track, rollercoaster-like courses, and a big host of drivers to race with. In a sense, Power Drift could be considered one of the earliest kart racers, minus the items and such that games like Mario Kart popularized.

From arcade to Saturn 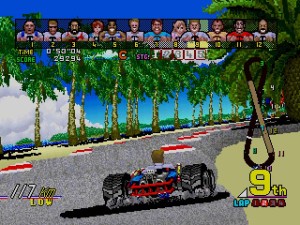 For the Saturn release, Power Drift still plays like the original for the most part, minus it running at about 30 frames per second. While it would have been nice to keep the arcade’s blazing frame rate, the Saturn port is still every bit as fun and frantic. In fact, I think Power Drift is one of the more “over-the-top” arcade racers I’ve ever seen.

The control is very responsive, and this port has support for almost all the Saturn controllers. Supporting the 3D control pad and Arcade Racer, SEGA Ages: Power Drift definitely benefits from the added analog support. The normal Saturn controller works well too, though, if you can’t find a 3D pad or Arcade Racer.

In the presentation department, this game looks just as good as the arcade original. It’s surprising the Saturn can keep this many sprites running on screen at a decent speed.

Power Drift in an interesting beast, considering every piece of road and roadside object are made out of big sprites. The Saturn handles this game very well.

The Power of Love

Power Drift’s musical tracks aren’t arcade perfect, but they sound great using the Saturn’s hardware. They have a bit more punch to them, and sound nearly as good as the arcade tracks. There is also a fully arranged soundtrack that can be used as well, if you’re into that kind of thing. These versions sound decent, but aren’t really my cup of tea.

Like the Wind is still good, but then again it’s Like the Wind. This port implemented selectable music tracks for the first time in this game, where instead of hearing the normal circuit’s theme, you can choose from anything on the soundtrack. The sound effects and such are great and every bit as good as in the arcade. 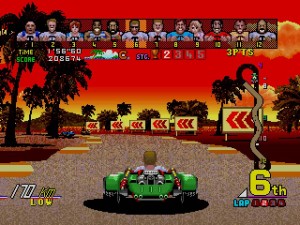 This game wouldn’t be a proper release without some extras thrown in.  These extras come in the form of the transmission selection and Grand Prix mode.

The transmission is just a small extra where you can have automatic or manual, which was the arcade standard. Grand Prix mode is a different thing entirely, though. This mode lets you race every course in succession, making sure you’ve played every course before gameplay ends. This can be considered a practice mode of some sorts, but it also puts all the bonus courses together as well, so there is an incentive to finishing it.

The original arcade Power Drift rewarded you for finishing first in all the courses in a circuit by giving you a bonus race, either using the After Burner F-14 Tomcat or the motorcycle from the original Hang-On. With the Saturn’s Grand Prix mode, if you get first in all races, you get all the bonus courses to race on as well, including some new courses made specifically for this mode. 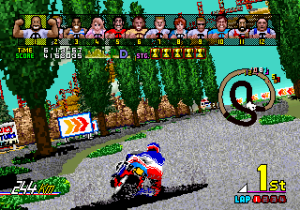 Altogether, SEGA Ages: Power Drift is just as fun as the arcade original. Even with the slightly bumped down framerate, this import is still worth it for anyone wanting to try out Power Drift.

To me, this seems like the most definitive port out there, where the others are just the arcade game. The presentation, BGM select, and Grand Prix mode definitely add something to make this much more than a bare-bones port.  This is definitely a game to pick up if you’re big into the Saturn and SEGA’s arcade classics.