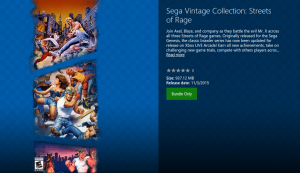 We’ve long been wondering exactly what Xbox 360 games SEGA might allow to become backwards compatible when the New Xbox One Experience is publicly released on Nov. 12.

According to an item listing on the Xbox One game store, the Streets of Rage SEGA Vintage Collection will be one of those games. However, the page listing has the game becoming available on Nov. 3, so it will be interesting to see if it somehow becomes available ahead of the Xbox One’s new operating system’s roll out.

The Streets of Rage collection was originally released on the Xbox 360 on May 30, 2012, and was ported by M2, which has been most recently known for its work on the SEGA 3D Collection for the Nintendo 3DS. The collection included new game trials and supported local and online co-op.

The 360 version was only 285 MB, while it looks like the Xbox One version is 937 MB, so it will be interesting to see why it’s more than three times the size as the original game.

As of now, Streets of Rage is the only game coming up for the Xbox One, while the rest of the SEGA Vintage Collection still only show they’re available for the 360. Here’s hoping that SEGA will make the whole Vintage Collection backwards compatible for those of us who supported it on the 360.

What other Xbox 360 games are you hoping will be backwards compatible? We’re looking at you, Vanquish!