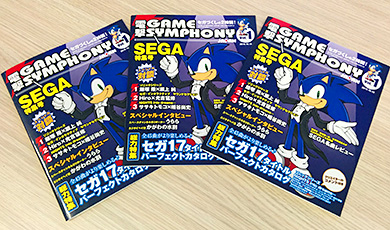 Hello everyone, this is Senoue,”Sonic the Hedgehog” series sound director.

I had to look back at the first  time I heard “Sonic” related music being played by an orchestra, it was in a series of concerts called VIDEO GAMES LIVE in San Jose by Tommy Tallarico in 2006. At that time, I previously reported about it here in the Sonic Channel, we worked on many song titles, matching the production video visuals and lighting. We received a great stimulus because it was an enjoyable experience. In addition, I also reported the following 2007 VIDEO GAMES LIVE San Francisco performances for this channel, we participated in the Meet & Greet after the show. A direct approach with the visitors, it makes you ​​aware when you first experience to enjoy the conversations, there was a lot to be obtained. Both, I think that it was the experience that had a major impact in my own subsequent way of thinking and behavior.

Well, this time is more of a “co-star with the orchestra”, but the opportunity to be allowed to do so is a big experience for me, yesterday, it was possible for me to participate in the rehearsal. We had a lot of interaction with Kano sensei, who was in charge of the arrangements for the “Sonic” related music, a demos was done, but I had to grasp the whole picture, and replace it with the actual orchestra playing , what a great feeling! Rather than play along with the song, I was forced to feel and listen to it in a special seat.

In the rehearsal, with respect to 3 songs that I have to join to play, stopping one by one song, I was traveling in the flow to make sure the part that I’m responsible for. And to play throughout, but tomorrow’s production will be the first time, while there is some tension I want to play and enjoy it too!

After that, they let me watch the whole of the rehearsal until the end, this time I was interested in the chorus too! Kano sensei arrangements, are done with music as the only thing in mind, went to acting leadership giving a texture to the songs. Please try to check this with your own eyes.

This concert, to know the music, there is no doubt there is so much to enjoy. If, in this repertoire, if there is any song you’ve never heard of, and since it is not too late now, I recommend listening to our latest compilation, “Sega Sound Selection vol.2”, and I think if you can come over to the venue, the songs I’m looking forward to are “halo-halo Nari Jans Ondo” and the “Segagaga March”!

I was unable to verify, but I think Hataya Yoshinaga duo was in charge, because the gimmick seems enough.

This time, the orchestra, director, and guest performers are in great synchronization, because the’s a part with guitars with 3 people including me, after the end of the entire rehearsal orchestra, the guitar part will be divided playing in a band team, including Kano sensei. We can confirm that.

“GAME SYMPHONY featuring SEGA” Concert Brochures, as is inferred from its name, seem to be in a magazine program format. After the show there will be an autograph session, the details I think will be confirmed at the venue in the product sales corner!

So, we’ll see you tomorrow at the venue!

As it has been previously published in the program, “Sonic” series music will start the concert, so stay tuned!

Want to listen to Jun performing at the Symphonic SEGA Concert rehearsal? Check this out:

If you wish to read previous SEGA Music Composers comments related to the SEGA Symphonic Concert you can do so here: