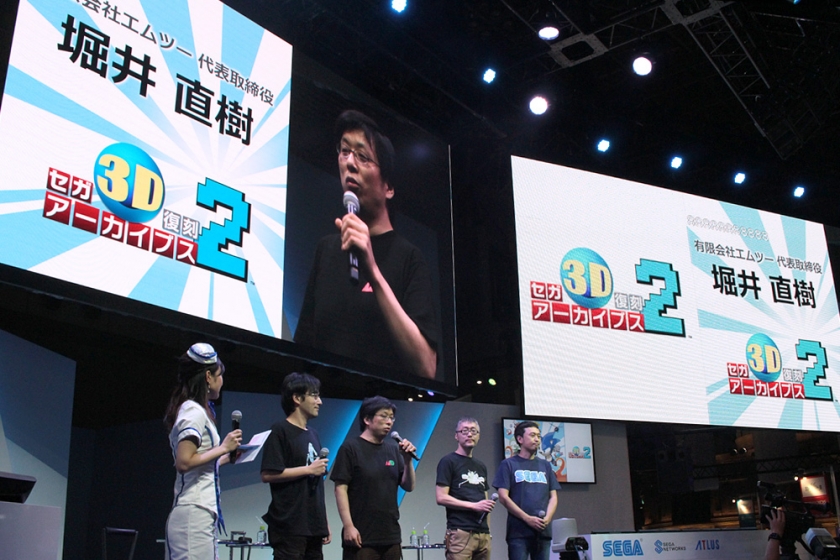 Today was the BIG day on the SEGA TGS 2015 Stream series, and man, what an epic Stream day it was! The stream jumped right into action with the SEGA 3D Classics talk, Issei Shimomura (lead producer) and legendary Yosuke Okunari (Series Producer) joined the stage first to introduce Naoki Horii from M2 (the studio developing the SEGA 3D Classics) and legendary guest illustrator Ken Sugimori from Game Freak (Pulseman, Pokemon, etc). The amazing talk began with Shimomura and Okunari talking about how the process to transport the Mega Drive titles to 3D and make a better use of the 3DS hardware. “I have been loving Sega titles (as an employee) for more than 20 years. And, as long as there is enthusiasm from everyone, we must continue that the SEGA spirit”, Shimomura said. Horii continued the talk by explaining M2 devleoped its own engine to fully achieve a real 3D feel to those games. They continued the talk with an explanation of their favorite games and some anecdotes on development, most of them had very fond memories for Fantasy Zone.

Later on, the SEGA 3D Classics Vol 2 physical compilation trailer was shown, so they talked about the lineup in it: 3D Sonic the Hedgehog, 3D Altered Beast, 3d Thunder Blade, 3D Galaxy Force II, 3D Fantasy Zone, and introducing for the first time just for this version: 3D Power Drift, 3D Puyo Puyo 2, and 3D Maze Walker in its Master System version with MS 3D glasses option. After that they began to show new footage for 3D Power Drift and 3D Puyo Puyo 2. For 3D Power Drift they wanted to make justice for Yu Suzuki‘s game legacy so they were excited and pressured to deliver an excellent 3D version, since the original arcade game made an astonishing use of sprites to simulate a 3D volume experience they wanted to take the 3DS 3D experience to another step. Power Drift was a title most fans were requesting to bring to this format. During the talk it was revealed that the Puyo Puyo 2 Arcade Version was chosen for the 3D remake. 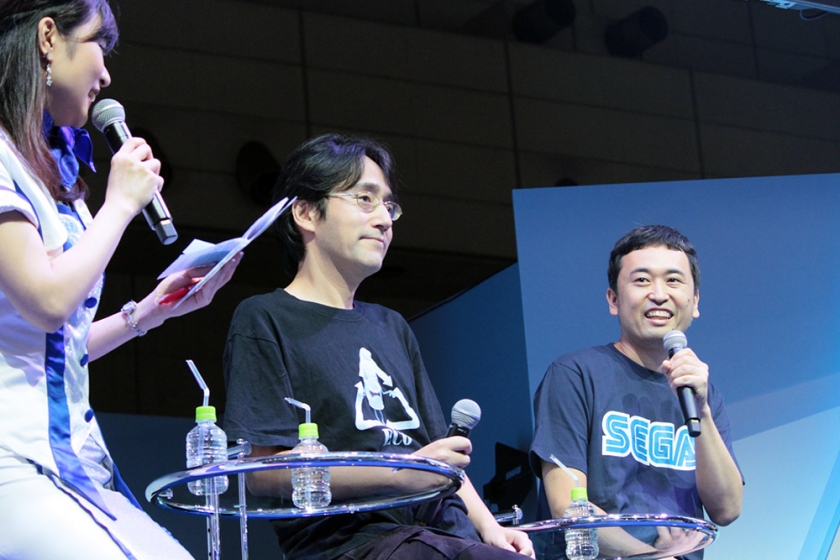 Then Okunari, Shimomura, and Horii introduced Game Freak’s Ken Sugimori again, to show on screen the art covers they have been using for the SEGA 3D Classics physical compilations, Ken talked about he enjoyed illustrating Space Harrier since he is one of his favorite SEGA Characters and had fond memories playing that Yu Suzuki Arcade, he joined the project because he worked on certain SEGA Mega Drive titles in the 90’s so he he was asked by phone to draw his version after complaining about one. The talk continued with some other fond memories for SEGA titles such a Ninja Princess. Ken Sugimori did a Phantasy Star Nei live sketch for the audience. The segment ended with everyone inviting the consumers to get this compilation. 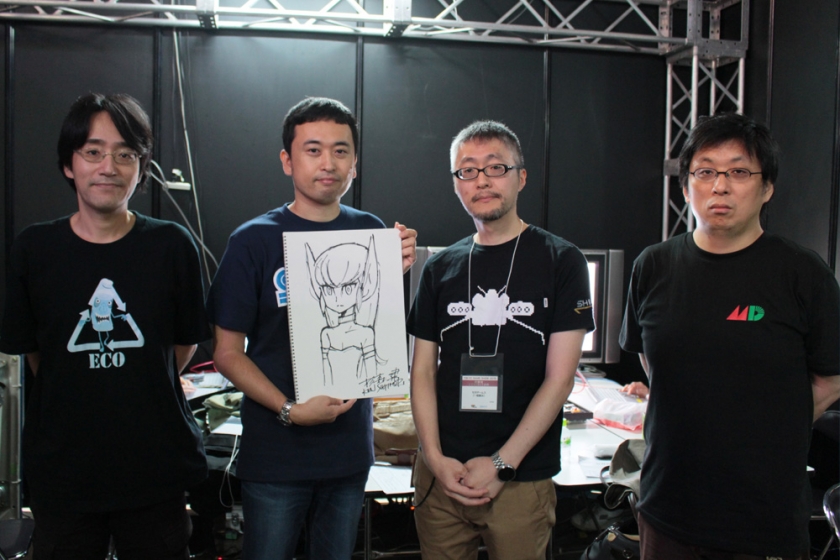 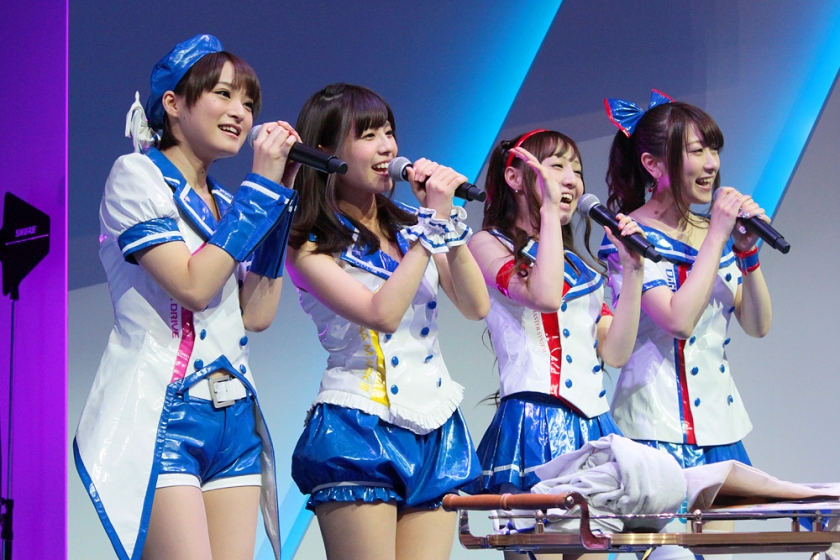 After the MAGES. and Nippon Ihci segments came the 7th Dragon III: Code VFD as the fifth stream segment. Juro (Producer), Masayuki Kawabata (director), and guest Tomomi Isomura arrived the stage to talk about the game and reveal some announcements. The talk began with them saying the story for this title will be a direct sequel for the events on the 7th Dragon 2020 series, making it the final chapter for the whole saga, a story that duels with past and future. The team praised Yuzo Koshiro‘s music work for this game, but unveiled Sasakure.UK will be also doing music work for this game, the following tracks were made public:

After announcing the tracks, the team presented the Katanako cosplayers from 7th Dragon 2020 & 7th Dragon III, and then announced 7th Dragon 2020 series character classes such as Katanako, Student, Otaku will appear in the game as paid DLC, and so will new quests for the game. Lord of Vermillion x 7th Dragon III collab was announced too.

As for the gameplay, the stream showcased the party team work with classes, how classes work and how much you can customize your character. 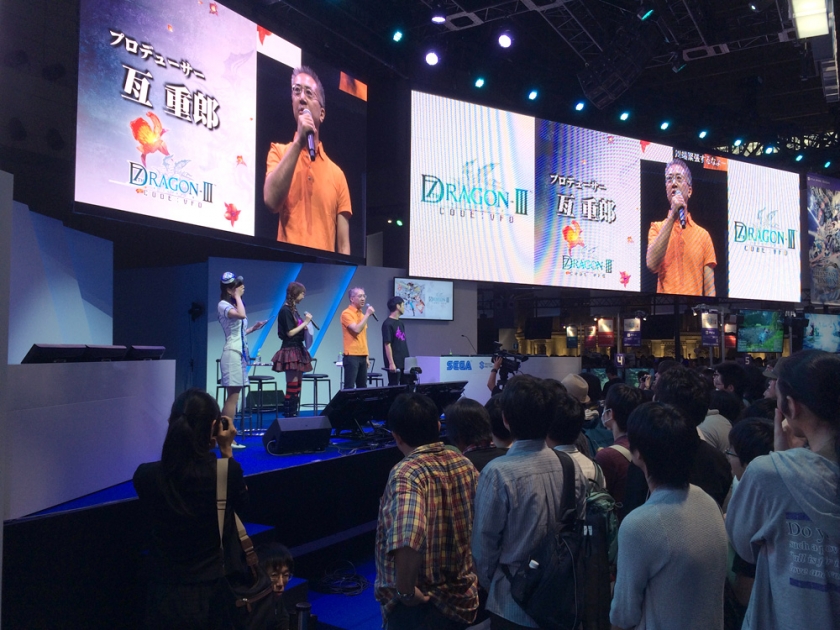 The Seventh segment was about the PSO2 Animation. PSO2 franchise producer, Satoshi Sakai, went to the stage to present the latest PSO2 anime information and footage, he started presenting presenting the main cast voice actors: Tachibana Itsuki as the voice of Aoi Shota, Suwa Ayaka Kiyoshi  as Izumi, and Dreamcast Hard Girl voice actress, M · A · O Ichimichi as Aika. New animation footage was shown along some locations which include a school and space, the anime will air next year on TBS, while the Opening song will debut on this year’s PSO 15th Anniversary concert “Sympathy 2015” on November 2015, Satoshi then showed the artists and guests invited to the event. 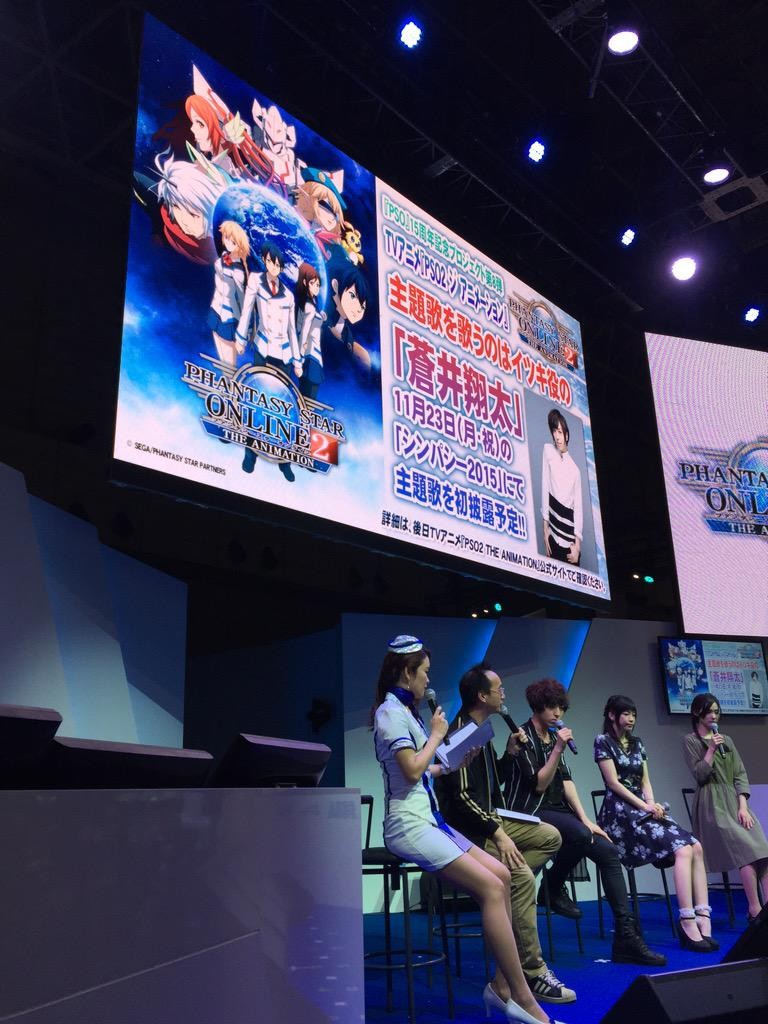 Dengeki Bunko Fighting Climax: Ignition stream was the eighth segment, they basically said the same as the 2nd day (you can take a more detailed read here), explaining the new Ignition System, then presenting the Fighting Cosplay Girls and the 2nd DFCI national champion player, they made some match challenges, so the champion won to be fed a brownie by the Misaka Cosplayer. The Stream segment closed with them announcing a Dengeki Bunko Fighting Climax: Ignition event! 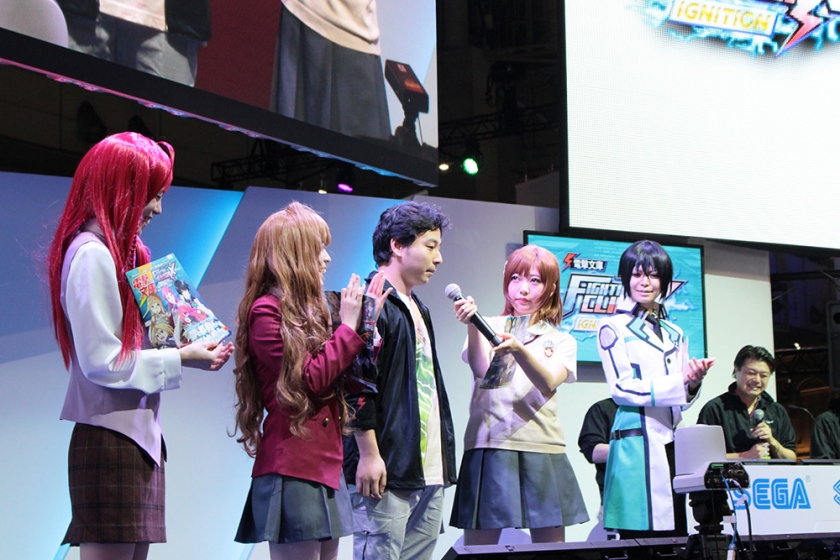 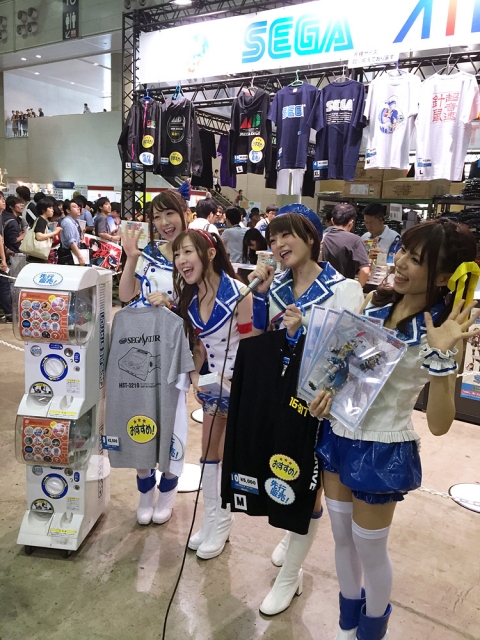 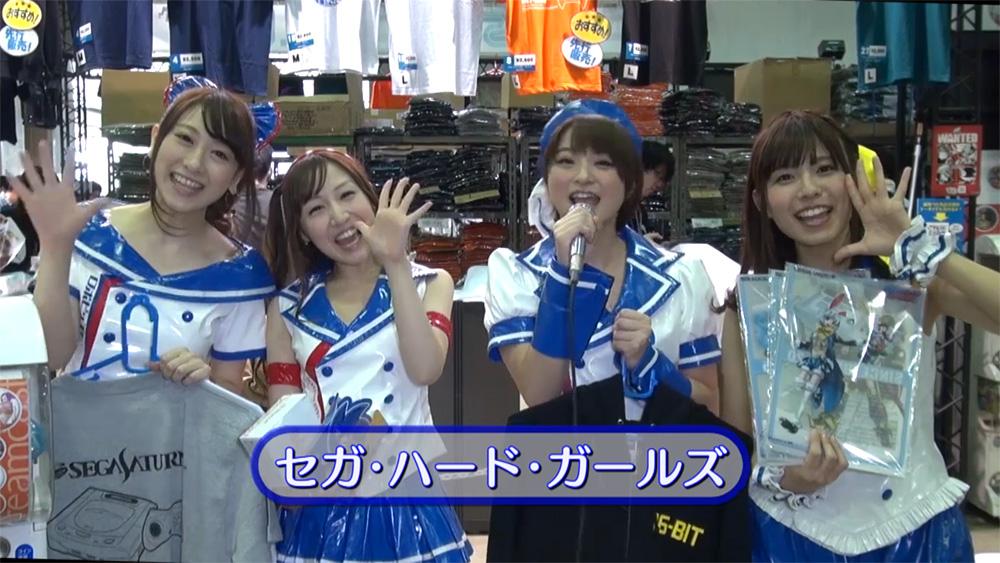 We had to miss the Lego Jurassic Park and Yakuza streams because… it was time for Segata Sanshiro on the Project x Zone 2 Stream at the Bandai Namco Stage! The show began with Kensuke Tsukanaka (Game Producer) and Soichiro Morizumi (Monolith Soft) introducing Tomokazu Sugita as Streets of Rage’s Axel Stone Voice Actor, he made quite a impression by starting to the character’s voice to introduce on stage the most awaited man on TGS 2015: Hiroshi Fujioka aka Segata Sanshiro, then the crowd went wild…

Fujioka made a comment regarding the nostalgia that it was being Segata Sanshiro, “Hey! I did most of the takes without a stuntman. I have deep memories cause most was done by myself. Sometimes I got lashes or burns or got frozen feet!”, “My bones got stiff (laughs ) when I had to carry a heavy Sega Saturn during.40 kilometers (scene filmed in Yamagomori)!”

Monolith has kept lots of the previous title features, for this sequel they decided to include new elements and balance adjustment, such as “Mirage cancel” and “charge bonus”, the strategy is now based on the map.

Here’s the review on the IPS included on the game:

Hirsoshi started to throw in come jokes and nostalgia anecdotes, to which the crowd eagerly replied and clapped. Tsukanaka and Morizumi then explained the character selection for the game, and started to show some gameplay battles, of course, the selected Segata Sanshiro to show his combos, then the crowd went wild again. The producers showcased some new characters from Xenosaga and that other company that starts with a small “n” we don’t care about… Fire… something… whatever… not important… Oh yeah! SEGATAAAA!!! The developers showed some of the preorder bonuses for the game like some rad posters exclusively available to certain Japanese stores, and the special Capcom, SEGA, and Bandai Namco mugs that will be exclusive to each company’s online store. The Bandai Namco team told the audience a PXZ2 demo is coming.

Guest artist, Marina, sang the PXZ2 Opening with the animation behind her. The Opening song music was composed by legendary Yuzo Koshiro of Streets of Rage fame. The stream closed with Segata saying “The legend of Segata Sanshiro will live forever! Thank you very much!” and the crowd air fist-pumping as a reply! 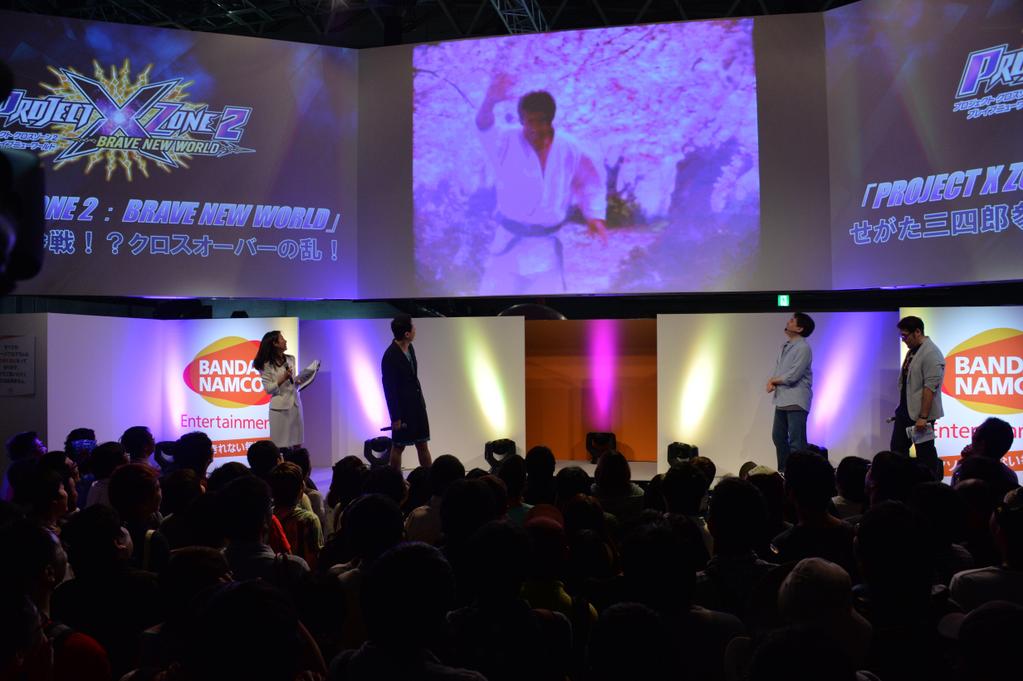 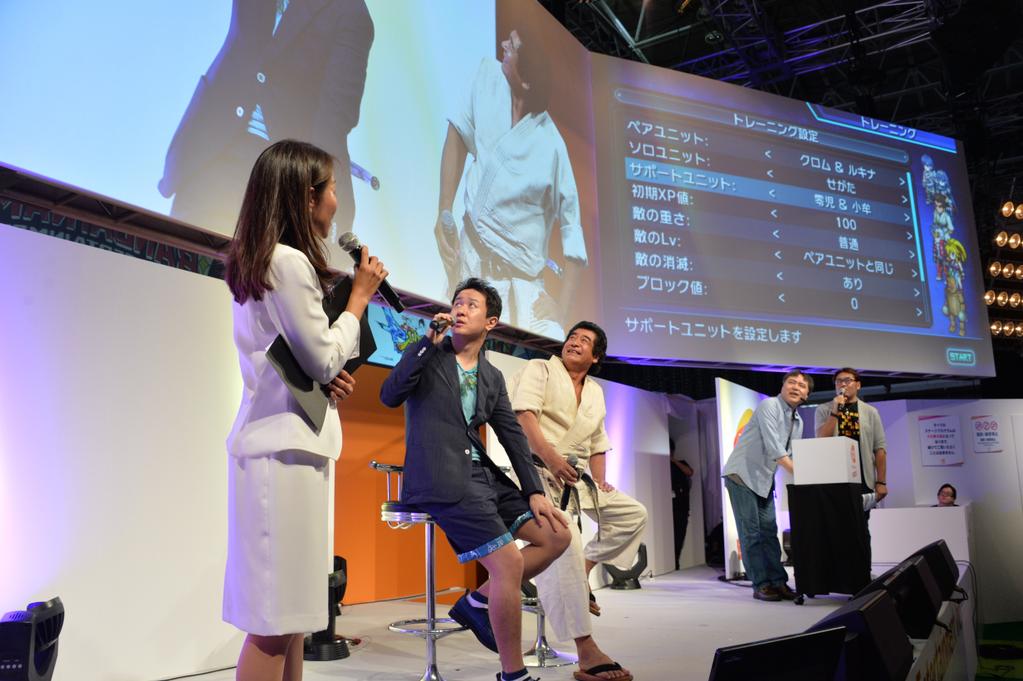 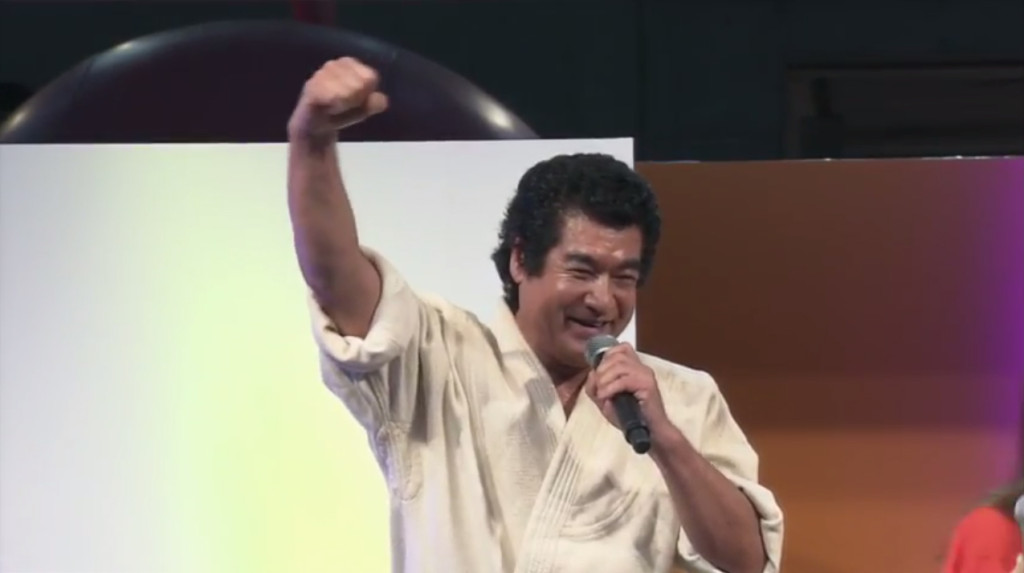 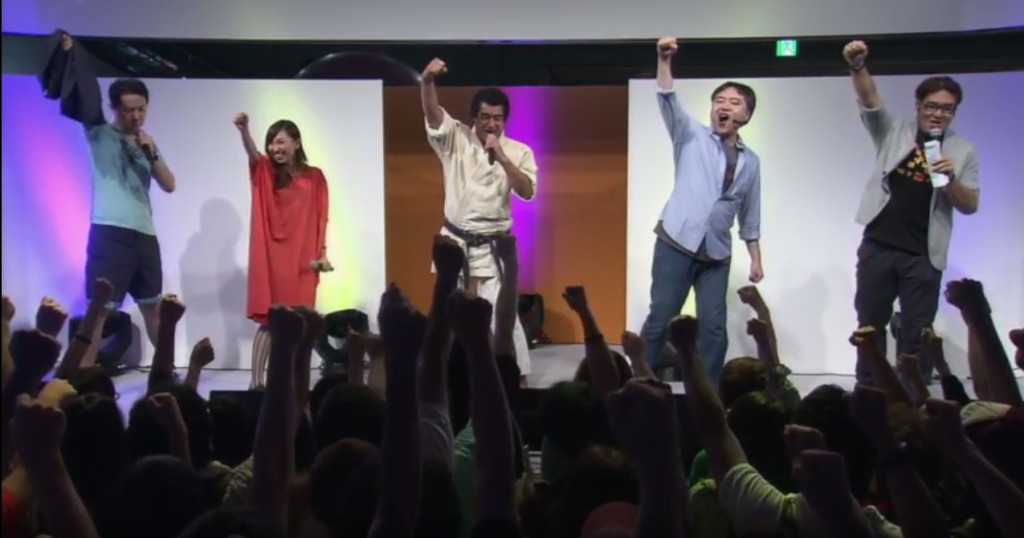 After that Segata Sanshiro odissey, we turned our heads back to the SEGA Stream to catch up some of the Persona 5 stream stuff, but we missed a lot… They were able to review the voice cast for the game, announce the new Persona 5 anime in the works… , some new merch like the Persona Awards DVD, and announce the Persona 5 OP artist. 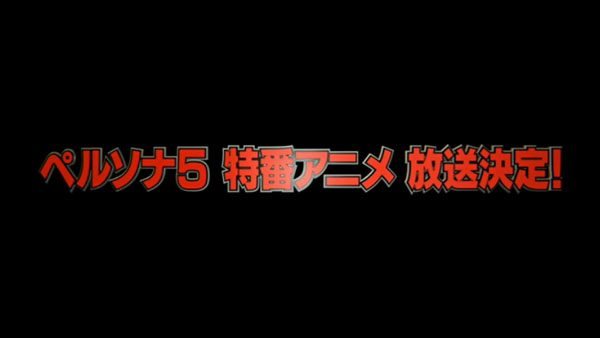 As sad as it gets for such an epic day for the SEGA fanboys like this one, all must come to an end, but, hands down to the SEGA of Japan people who decided to wrap things up with the best possible way: a SEGA Hard Girls concert. M · A · O (Dreamcast voice Actress), Shiori Izawa (Mega Drive voice actress), Manami Tanaka (Sega Mark III voice actress), Takayama Yuko (Master System voice actress), and Haruna (Robopitcher voice actress) jumped to the stage to perform a special remix of “Young Force” the ending song from the Hi Scoool SeHa Girls anime. The crowd went wild, they sang every part and shouted “SEGA” and all the “console” names in the lyrics.

Once the Hard Girls ended the song, the applause was huge. It was time to close a day to remember. This is how you do a great SEGA event. 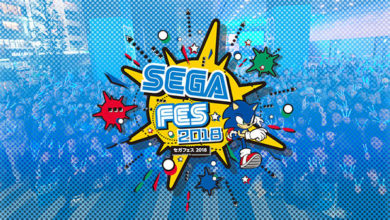 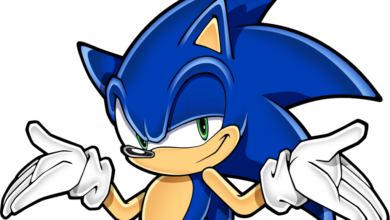 November 21, 2017
Check Also
Close
FOLLOW US
Use code SEGA at checkout to get 30% off EwinRacing gaming chairs