It looks like the excitement around Shenmue III‘s announcement wasn’t just from hardcore SEGA Nerds – according to big data company, Digital Contact, Shenmue III caused more of a stir on the social sphere than some might have expected. The game was recorded by the company’s ‘big data analytics platform’ to have received the second highest number of mentions on social media, behind Fallout 4.

Digital Contact is said to have monitored the week-long* event on social channels, pulling in more than 13 million social comments around E3, exhibiting companies and games on show, and has published a report on the top ten games mentioned across social media. 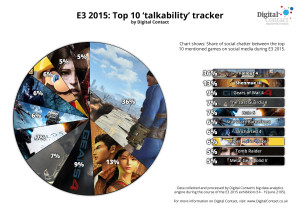 The top ten games (combined) are said to have accounted for more than six million social mentions and the clear winner was Bethesda’s Fallout 4 – obtaining 36% of the mentions from the top ten games – which is pretty darn phenomenal.

Sure, we’d all like that figure to be in the millions, but it’s still a huge amount of mentions and it clearly beat out AAA titles such as: Gears of War 4, Halo 5, Uncharted 4, Tomb Raider MGS V and even our old enemy/new friend, Mario… although that was Mario Maker – which while I’m sure is going to be awesome fun to play/make games with, isn’t quite the same as a ‘new Mario game’. Plus Shenmue‘s mentions almost doubled that of Sony’s ‘thought to be cancelled’ Last Guardian – which I would have assumed to have had a massive reaction… speaking of massive reactions, Final Fantasy VII HD isn’t even in the top ten.

Anyway, I think it just goes to show that Sony and Yu Suzuki did a great thing by announcing Shenmue III in such a way; the ‘surprise factor’ really blew gamers away and the data here shows that. 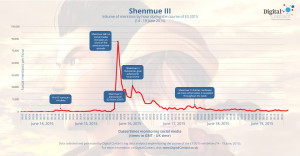 It also still makes me wonder whether SEGA will actually step up and get more actively involved in the project? I know the original games were considered a commercial failure, but if fans really are craving the game this much and talking about it more than some of the best selling games around, then I would strongly reconsider my position and look to get hands on in such a project.

Of course, on the flip side, the data is only showing the reaction to the game’s announcement really. Shenmue III isn’t due for a couple of years and the excitement will probably die down by then… but I really hope it doesn’t.

Speaking of which, if you haven’t already helped to fund the game – then head on over to the Kickstarter! There’s only a few more hours left until it ends!

[*Yeah I know ‘technically’ the show is only three days long (June 15th – 18th), but the conferences start before E3’s doors open and stuff’s always happening around the official show dates]