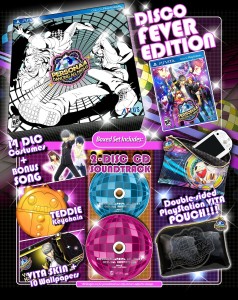 NIS America announced today that Persona 4: Dancing All Night will release in Europe this fall with a physical and digital version on the PlayStation Vita.

There will also be a “Disco Fever” limited edition that will include:

No price was announced for the “Disco Edition” in Europe, but online retailers are listing the Western version for $79.99. Persona 4: Dancing All Night, also being released in the fall in the West, is a story-driven music game that takes place after Persona 4 Arena Ultimax. The music-rhythm game explores nearly 30 full remixes and original tracks based on the compositions of Persona series music composer, Shoji Meguro.