While sitting in my Study of One Thousand Screams and sipping a fresh glass of ethanol, I decided to really think about the logistics behind developing a hit game in the greatest period of time that ever existed: the 1990’s.

Unhand your “smart-phone” for a moment, turn down your Beyonce Knowles and imagine a world where a Big Mac cost 99 cents, gasoline could be consumed openly in the streets for pocket change and Bill Clinton existed to remind the world that smooth jazz still had a place in political discourse. If you weren’t wearing fluorescent colours, you were wearing ripped jeans and telling that “gnarly” “biter” to “step off” your “rad” skateboarding arena.

Most importantly, during this period, video games still had soul. They were literally infused with the souls of their developers as they ate and slept in the office and defecated in coffee cups to avoid having to attend to personal hygiene if that would get in the way of Sonic’s fast going. They had something to prove in this lawless and wild landscape where fresh programming graduates were often eaten alive by vending machines or fed into huge, archaic printers that scraped at the doors of quivering CEO’s while sliding crude black and white photocopies of their innards under the door.

Well, returning to my habit of consuming pure alcohol. While ruminating I realised that literally no bad games were released before 2000. Patches? Never heard of them, just fall through the floor into a WARP ZONE. Let me just input this CHEAT CODE in order to GROW FIFTEEN FEET AND PUNT A TODDLER INTO SPACE. We’ve all played these games if we’re here, reading this article that will change your life forever and using a formula I devised while thinking about whatever point I am trying to make, I came up with this:

WHY NO BAD GAMES WERE RELEASED BEFORE 2000

Now, I had my formula. I knew how to make the perfect game if it was 1993 and I was sitting in a board room beating back a Coke machine with a broom that was half eaten at this point and covered in whatever was left of my last intern.
So, now the only thing that was left to do was come up with some kind of game based on my formula that makes absolutely no sense mathematically, but still makes sense. I don’t need physics when I have my Mega Drive. Education is irrelevant when I’m parallax scrolling so hard my jaw locks and all of my bones turn into rice pudding. At that point my molars have been flung across the gulf of space and time into the backyard of some alien celebrating its son’s graduation with a barbecue and SMACK my molar just clean puts a hole straight in his head.

So after much deliberation and biting my nails until my fingers are just bloody nubs stabbing wildly at my phone screen to call an ambulance but I can’t because nubs won’t dial, I have come up with the perfect game to fit my equation. 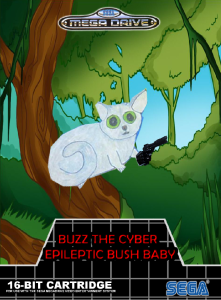 It’s got everything. It’s about a bush baby named Buzz that is epileptic but also a robot so he has to collect his medication to stop himself from seizing out and if he does the enemies around him explode and everything explodes and it’s game over. BUT! If you do go into seizure mode you have to go on a PARALLAX SCROLLING quest to get back to reality and stop Dr. RX from rolling in his money pile he makes from your cyber bush baby problems. Also, all of the enemies are named after the band members from the 1994 line up of Aerosmith and in the event you get a game over you can get an extra continue by fighting Mike Tyson in a George Foreman’s K.O Boxing style fight to the death.

BUT that isn’t all. If you send in your proof of purchase I’ll send you a real bush baby that can be player 2 and I have even modified a real Mega Drive controller by attaching pieces of fruit to the buttons to make the bush baby press the buttons and it works but every time it presses a button to get the fruit you need to put more fruit on the button and it’s really not very good so just enjoy the bush baby.

That’s it. What’s your ultimate classic Sega game? Write in the comment section below what you feel would make the ultimate game and we’ll all go “hmm, that’s good, but my idea is just marginally worse.”