Welcome to yet another enthralling installment of One on One with yours truly. I am thrilled to have this opportunity to interview a true SEGA legend. With us today, celebrating Daytona USA as our Game of the Month in February, is the Official Soundtrack for Daytona USA, also known as the Daytona OST. How are you today, sir? 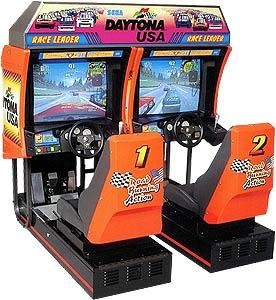 The Requiem: Hah! Nice. Well, let’s get started, shall w-

The Requiem: Okay! We get it! So, you’re a legendary icon from the Saturn era and SEGA’s arcade heritage. Do you ever fall victim to letting that go to your head?

The Requiem: I’m going with “yes.” Anyway, you were composed by long-time SEGA music composer Takenobu Mitsuyoshi, who also performed your vocals. Where do you think Mitsuyoshi-san found his inspiration when composing you?

The Requiem: Well, that’s a little obvious, but-

The Requiem: Go away? To where?

The Requiem: Hell yeah! Let’s get the f–k outta here! This gag doesn’t really have much legs, anyway! You driving?

The Requiem: Fly? We’re gonna need to put you in some kind of storage, if that’s even possible…

The Requiem: I don’t think we’re really going to be able to make that happen… Why don’t we just drive? That’ll be more fun, so long as the weather is good, right?

The Requiem: Oh, so you checked already?

The Requiem: Okay, that doesn’t really make any sense…

The Requiem: We’re not really going to Daytona together, are we?

The Requiem: Dammit! So this was, what, a big joke to screw me over and piss me off? Is that what you were trying to do?

The Requiem: F–k you, Daytona OST! You can shove this interview up your tail pipe! We’re done!

Want to check out more of my timeless interviews? Click here. Hey! I made it through an entire interview with a race car and didn’t once mention a sex joke or Danica Patrick! That’s called making progress, Doc!