Fighting games are my second favorite genre next to racers. I still have fond memories of playing the likes of Street Fighter II, World Heroes, and  Killer Instinct back in the day.  You can say I know my way around a stick and six-button layout.

I don’t really have a favorite series per se, but there is one fighter that quickly rose the rankings of great fighters in my opinion – the original Persona 4 Arena. I love fighters made by Arc System Works, and P4A is no exception. To think that a simple, four-button fighter could get you into a series of great RPGs is an awesome thought.  P4A was the reason I started getting into the Persona series as a whole.  Pretty crazy, but true. With the effect that the original P4A had on me, I had high hopes for its sequel – Persona 4 Arena Ultimax.

Persona 4 Arena Ultimax was released in North America on Sept. 30th, 2014, two years after the original P4 Arena. It seems like a long wait, but with all the stuff Atlus crammed in there, the wait was worth it. P4AU is available for both the PlayStation 3 and Xbox 360, in both digital and physical forms. There was also a somewhat limited pre-order edition that came with a couple bonus items if you bought the game at certain American retailers. Atlus does this thing a lot it seems. But enough about that, on with the game!

P4AU and its predecessor both play alike. You have a simple, four-button layout, with two attack buttons (weak and strong) and two Persona attack buttons. There is also a couple of different combination attacks done with certain buttons pressed at the same time. The three most common examples I can think of are Furious Actions, All-Out attacks, and Sweeps.

Furious Actions are more or less some type of rising uppercut/high attack, depending on the character. All-Outs are a type of combo attack, that uses button mashing to raise the amount of hits, and also can result in launching the opponent in the air, or also knocking them back towards the wall.

Sweeps are simple variants on a sweep kick of sorts, depending on the character as well. P4AU evokes that normal ArcSys type of gameplay that seems slightly easy to start with, but difficult to master completely. There is also a simple, auto-combo system in place, used by repeatedly tapping the Weak attack button, which results in a small combo ending with a super.

But what about the story? 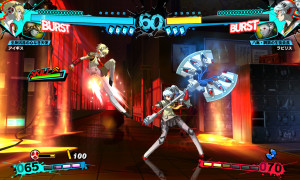 Being based on the Persona series of RPGs, Persona 4 Arena Ultimax  does not fall short when it comes to the storyline. P4AU has a pretty deep story mode, consisting of three or four different storylines to play through, depending on  if you purchase the DLC. If not, you’re stuck with the basic two, covering both the Persona 3 and Persona 4 casts. The story mode is very good regardless, with some great voice acting and a couple animated cutscenes added in, for good measure.

There’s also a couple of different choices within this mode, mostly in dialogue, and with a choice of character depending on fights. There is a slight party type system in place here, with you selecting who to fight, between a small group (usually three to four) of fighters to use in certain matches. All in all, story mode is damn good.

Who are the combatants?

The returning characters from the P3 side are Junpei Iori, Yukari Takeba and Ken Amada. The P4 cast’s new additions are Rise Kujikawa, Tohru Adachi, Marie and Margaret, with the latter three being the DLC characters. An entirely new character was made for P4AU as well, in the form of Sho Minazuki, who is a central plot point in the story mode, and in some aspects; the boss of the game. There are also Shadow types of the original Persona 4 Arena cast, which play just like they did in the original game.

Let’s get down to the basics 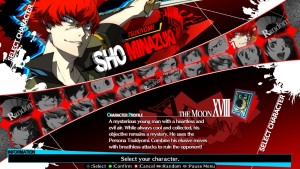 Your basic fighting game modes are here: Training, Versus, Network Battle, you know, the usual stuff. There is also a Lobby mode, which is basically where you can sit and wait until you find random, unranked matches. Also included is your Ranked/Player matches and a Challenge/Tutorial mode.

The Challenge/Tutorial mode is the way to teach you the basics of P4AU and learn key combos with every character in the game. It can be time consuming, but it’s worth it if you want to get good. In all, there aren’t many modes, but for a fighting game, that’s kinda common.

The netcode for Versus matches is very stable, which is good for a fast fighter like this. I actually play this online almost daily, and have yet to experience random disconnects (minus the damn rage-quitters!). There is also a very active community playing on the PS3 version, while I’ve heard there’s not so much on the Xbox 360 version. I have a group of players that have been my training buddies and rivals ever since I first got Ultimax.

How does it look?

Presentation wise, P4AU pulled out all the stops. The visuals and sounds live up to the series’ great reputation, and the new stages and hand-drawn sprites look marvelous, as well. With a large music selection of original tracks, and the best of P3 and P4’s backlog of music, you’re in for a great soundtrack. I still find myself listening to it randomly, P4AU just has a damn good selection of music to fight to. The characters also look better in P4AU compared to its predecessor, which is great to see. 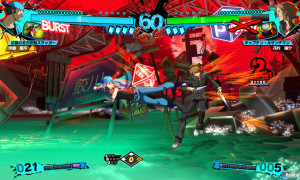 Persona 4 Arena Ultimax is a very good fighter that’s easy to hop into and play. With a very flashy presentation and an amazing soundtrack, Persona 4 Arena Ultimax might be my pick for best fighter of the year, and it’s definitely worth the pick-up. Even if you’re not a Persona fan, this game is sure to please any fighting game fan.