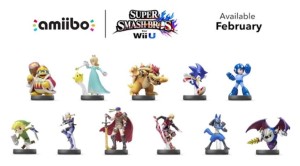 [Update 1: It looks like Sonic will also release in February in North America, alongside 10 other Nintendo characters.]

We already knew that Nintendo had plans to release a Sonic Amiibo in November last year, and during today’s Nintendo Direct, the company announced it will be released on Feb. 19 in Japan. Sonic will be available alongside Shulk and Mega Man.

There’s no word on when the Sonic Amiibo will be released in North America, but Amazon has an item listing that’s been online for awhile now. Previously, you were able to pre-order the Amiibo from Amazon, but it seems as if they’ve taken that option away, but you can sign up for an email alert when it becomes available again.

And if you plan on picking up the Sonic Amiibo, we suggest you pre-order it as soon as you can or face the onslaught of Nintendo fans who rabidly buy them all up, leaving only the crappy ones that no one really wants. The Requiem wrote an open letter about the Amiibo phenomenon, and you’d do well to heed his advice.