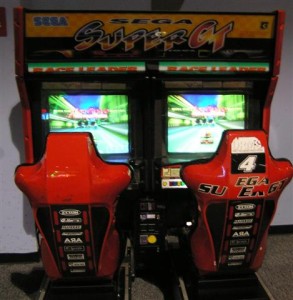 Hello again, and welcome to another exciting entry in the Forgotten Racers series! I know it’s been a while, but trust me, the wait is worth it. I have a lot of great entries on the way for this series. Like today’s, for example,where I’m taking a look at an overlooked classic: SEGA Super GT.

Are you ready? Here we go!

Known to some parts of the world as SCUD Race, SEGA Super GT was released in arcades in 1996, developed by the famed SEGA-AM2 group, for the SEGA Model 3 arcade board. SEGA Super GT is loosely based on the FIA World GT Championship, known then as the BPR Global GT Championship. Most consider it a sequel to Daytona USA in some way, but I think it feels like a semi-sequel to SEGA Touring Car Championship.

This is an arcade racer I used to see all the time as a kid, and I dropped many a quarter into it. While I was on my trip to the ScrewAttack Gaming Convention this year, I had the chance to experience SEGA Super GT all over again, Which gave me a lot of time to remember the good old days of playing this, and the chance to give the game an honest opinion.

SEGA Super GT is one of those great 3D arcade racers that you can come back to and have an awesome time every time. The premise is fairly simple, as most arcade racers were at the time. Race, get first, and keep going until the time runs out, or you finish a certain amount of laps. In Super GT’s case, the simplicity of the gameplay doesn’t matter. The framerate, graphics and atmosphere more than make up for it. In Super GT, You choose one of four GT cars (Ferrari F40, Porsche 911 GT2, Dodge Viper GTS and the McLaren F1 GTR) and race on one of four awesome courses (Beginner, Beginner -Night, Intermediate and Expert). 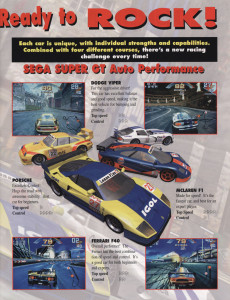 Visually,  Super GT is a beautiful looking racer, one of the best SEGA racers I’ve seen in fact. The textures are mapped well, the courses are modeled great and the cars look amazing. Additionally, Super GT has some of the best modeled vehicles of the time. The Ferrari F4o was always one of my favorites to use in the arcade version.

SEGA Super GT’s use of lighting in areas is pretty cool, as well. For example, the Night course’s lighting and reflections still blow me away. But, then again, SEGA and AM2 were always kings of having awesome graphics in the arcade. What shocked me was the high framerate that this game could keep with so much graphical detail on-screen. 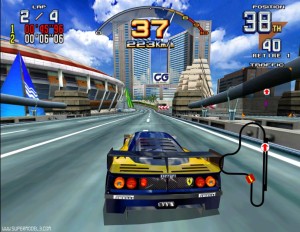 Gameplay-wise, SEGA Super GT’s handling is on-point. The cars feel just like they should, with a little bit of Daytona/SEGA Touring Car style drifting thrown in. SEGA really did well with the handling, the cars are fast and cut through corners like butter. AM2 always knows how to get car handling and racing well. But as good as the handling feels, the sense of speed is just as great. All the features of Super GT meld together into an awesome arcade racing experience.

Audibly, Super GT doesn’t lose any momentum. The music produces kind of a Eurobeat sound, reminiscent of SEGA Touring Car Championship and Initial D Arcade Stage. It sounds pretty good, nothing spectacular, but it’s decent. Where the game truly shines in the sound department, however, is the car audio, which sounds almost perfect and very close to what the cars they sound like in real life. Sound effects and such are clear and loud, minus the crew chief’s voice, it’s kind-of  hard to hear because of how low volume it is. But otherwise, the audio in SEGA Super GT is great.

All-together, SEGA Super GT is an arcade experience you don’t want to miss out on. Great cars and handling, awesome graphics and sounds, and amazing course design meld together into one of AM2’s best racers.  If you ever see Super GT in an arcade, make sure to give it a play. It is truly worth the experience.

As usual, make sure to leave your feedback in the comments below. If there is any idea of a SEGA released racing game or a racing game on a SEGA console you’d like to be featured in a future Forgotten Racers, you can always comment or reach me on my Twitter handle, @Kusanagi765. Have a great day, and I’ll see you all out on the track!