Space Harrier II is a relatively smooth, competent, and fun game. But it is also unremarkable in many respects, and it never reaches the heights of its arcade predecessor.

Those who know me know that the original Space Harrier holds a special place in my heart. I own and have played thousands of games, and the original Space Harrier arcade game is my absolute favorite game of all time! Needless to say, seeing a sequel to my favorite game as a launch title to SEGA’s most successful system is kind of a cool thing for me.

I was not fortunate enough to get a Genesis at launch, but when my brothers and I finally saved up enough for a Genesis/SEGA CD combo during the Christmas of ’92 season, Space Harrier II was one of the first Genesis games I had to track down.   Granted, I probably had pretty high expectations for the sequel to my favorite game, and the original is tough to beat, but even despite the faults of the sequel, it was still an enjoyable game, and one of the best Genesis launch titles in North America.

I’ll just get this out of the way up front. Space Harrier II is not as good as it’s arcade predecessor. It suffered from “early Genesis title” syndrome, which all games of the infant Genesis suffered from. The developers for the Genesis just hadn’t quite figured out the new system yet, even from SEGA’s internal studios.

The games definitely looked better than the 8-bit titles of the time, however, there was a certain lack of polish that we would come to know in the later years of the 16-bit era. There was hardly anything you would call “animation” in this game. It was mostly just scaled sprites that got bigger as you approached them. It was a decent enough illusion, but the arcade original was smoother about it… AND I missed the giant nuclear explosions too! This game just gives you itty-bitty little Diet Coke with Mentos explosions.

The controls were tight enough, and I liked having the option for rapid fire, but you are limited in the number of shots you have on the screen at once, which can cause problems when you need to shoot down some new enemies and all your bullets are still travelling the distance. Just like Super Thunder Blade, the enemies are able to shoot through pillars that block your shots, and you will still have some unfair deaths because of it. 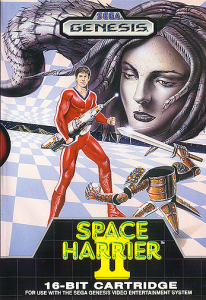 And who doesn’t get all nostalgic hearing those early Genesis titles? I always thought it was strange that nearly every game had at least ONE song that would cause your ears to start bleeding (Pedicopter music, I’m looking at you). The boss of the first level in this game has this song called, “Nuclear Shock,” and I seriously practiced beating the boss as quickly as possible just to avoid hearing that song!

I guess I should say “first level” loosely, as you get to start this game by choosing the level you start on. That was pretty cool, as it gave you the chance to play later levels you might not have been good enough to get to otherwise, although, I always felt Space Harrier II was a bit on the easy side. You basically play through 12 levels, starting at whichever level you want to start, and then you get to play a bonus area every few stages. The bonus area reminds me of the code from the Master System original where you could fly as a jet, which I thought was cool, but not nearly as cool as flying on the back of a dragon!

After the first 12 stages are complete, you are then taken to stage 13, which is a boss rush stage where you fight all 12 of the bosses again, and then the final boss of the game. You can play through the whole game in about 30 minutes, which feels about right for this type of game, but still, not quite as long as the original.

With all that said, Space Harrier II does still have a lot going for it, especially as a Genesis launch title! Overall, the bosses were fairly original while retaining some of what made the original ones so cool! Instead of just a floating dragon, you get Medusa, who approaches you all calm like, and then busts out into her monster form. And then there’s the winged tiger that starts by flying at you until you have shot his wings off. Once those are out of the way, he runs back and forth and then charges at you. Some pretty great designs, but still felt a little half-hearted.   Take our friend the flying tiger for example.   He sure looked cool, but instead of running at the screen, he just gradually gets bigger. With a little more polish, these could have been classic battles!

Speaking of near classics, this game has some really great tunes… composition wise!   The Genesis was never known as an audio beast or anything, but there’s no denying the sound got better with time. The main theme of this game, again, not as classic as the original game, but still really catchy! I especially like to hear this one in its arranged form! Sort of has that “Neverending Story” feel to it!

Where the game really shines though, is in the occasional moments of heart pounding greatness in the gameplay! The patterns in this game may feel familiar to the average Space Harrier fan, but there are a few times where you are flying through wave after wave of pillars with only the smallest of gaps to wedge between, and if you pull it off without dying, you feel AWESOME! It’s too bad the entire game isn’t as exciting as these parts, otherwise, I could have more easily overlooked the other flaws the game suffers from.

“Many more battle scenes will soon be available?”

All in all, Space Harrier II was a good launch title, but lacked enough polish to call it an all-time classic like the original. It’s too bad Sega has all but forgotten Space Harrier for the most part, because as it stands, this may be the last completely original game in the series that we’ll see at home… If only SEGA would release an online playable home port of Planet Harriers!

+ Some pretty cool bosses
+ Soundtrack has moments of greatness
+ Moments of intensity are freakin’ awesome! 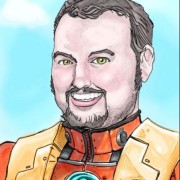