According to the latest issue of the popular Japanese gaming magazine, Famitsu, a new Yakuza game is in development and (according to a dodgy Google and Bing translation – both were a bit off) auditions to become hostesses in the game are also underway.

The announcement comes via the Famitsu website, following an interview in the latest issue of the magazine with the Yakuza series’ supervisor, Toshihiro Nagoshi, and producer, Masayoshi Yokoyama. 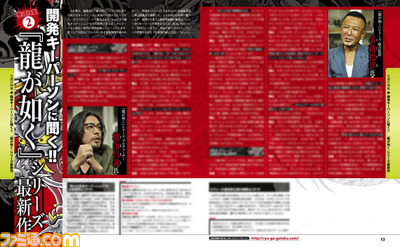 More details are yet to be revealed, but one thing we all need to know is whether or not this Yakuza will also be released in the West?! But seeing as the last two games, Yakuza 5 and Yakuza: Ishin, were only released in Japan – I wouldn’t want to hold my breath (especially as Yakuza 5 was released December 2012).

Not much else has been announced yet, but more information is revealed in the interview – we just need to wait for the issue to release, which should be in the next few days. Though one thing I think will be safe to say is that the game will release on the Playstation 4, seeing as every other Yakuza title has been a Playstation exclusive… with the small exception of the HD remakes of 1&2 released on the Wii U – but for some reason I feel a Wii U exclusive will be unlikely in this case.

Anyway, that last bit is speculation on my part, stay tuned for more definite details as we hear them.