Perhaps known to most as the ‘Daytona guy,’ Takenobu Mitsuyoshi is a Japanese composer whose musical tastes and styles in genres stretch from classical to techno and everything in between. Even if you’re the most casual SEGA fan, you’ve likely heard several of his songs without knowing.

He’s spent more than 20 years — his entire career — with SEGA creating countless classic songs and has helped the industry grow outside of basic sounds and into what many people would consider a whole new art form altogether.

Takenobu Mitsuyoshi was born on Christmas of 1967 in Fukuoka, Japan. The son of a businessman, at age 3, his family had transferred to Chiba Prefecture and would stay there for most of his childhood.

He had dreamed all of his life that he would make new styles of music, even his family and friends (who call him Take [Tah-Kay] for short) could see that even at an early age he would grow up to, at the very least, have a lot of fun being a musician.

Whether it be with a guitar, piano or just his voice, he was always known to make people happy, even when just a small child. He decided to commit himself to improving his musical talents, while  keeping an open mind as to what he would do with his life.

During his years studying at Tohoku Gakuin University, he majored in economics but never let his passion for making many different styles of music fade. While at his university, he gained more and more interest in manipulating then-current technology to make unique sounds, which quickly turned into a passion for video games and their music.

Some of his favorite games at the time included Xevious and Pac-Man. In 1990, while in a band of his own, he applied to work for SEGA of Japan, hoping that they would add him to their S.S.T. Band.

[Takenobu Mitsuyoshi on keyboard, circa 1992]

In 1988, SEGA had created an official band to promote its arcades and home platforms titled The S.S.T. Band (SEGA Sound Team Band), a six-member outing that would play rock versions of SEGA’s arcade game music at festivals.

Three years later, in 1991, Takenobu Mitsuyoshi, under the alias R. Saburomaru (sometimes R360), replaced Hiroshi Miyauchi on keyboard and vocals, who had recently left. Whilst this version of The S.S.T. Band only lasted until 1993, its impact was fairly large with re-releases of their albums every few years selling out instantly.

Hiroshi, or better now known as just Hiro (and sometimes just H.), would go on to have his own separate career within SEGA and work with Takenobu on many projects in their future. They still regularly hang out, typically live-streaming a lot of their songs.

During the development of a spiritual sequel to Virtua Racing (a highly successful 1992 arcade racing title), rival company Namco began to promote its impressive Ridge Racer, which was considered highly innovative and advanced for its time.

Executives from SEGA wanted something bolder than a simple Virtua Racing 2 and instead commissioned Toshihiro Nagoshi and Takenobu Mitsuyoshi to produce their highest quality work, allowing their budget to increase to the point that they were allowed to use real-world brand names.

Working on all sound affects in the game, Takenobu found it challenging to produce satisfying results. He wanted real V8 engine sounds and vocals for the first time, but even with the advanced technology at the time, full vocals were an impossibility.

The creation of samples that were shorter and repeated voice clips in short plays had been designed instead. The game came to be known as Daytona USA and would go on to be the most successful arcade racing game of all time, still making money to this day under the name SEGA Racing Classic in arcades, but was also recently made available with the original title on Xbox Live Arcade and PlayStation Network.

The soundtrack is considered one of the most memorable and loved in the medium, with new albums and remixes being released every few years, only to sell out within days.

Mitsuyoshi has voiced many characters for various SEGA games like Rent-A-Hero, Burning Rival and Virtual-On, but the most iconic is for the ninja character Kage Maru, whom he has voiced since the very first Virtua Fighter in 1993. He also was the voice actor for Akira Yuki, but only in the first game.

He had created music for both Virtua Fighter 2 and 3, but one of his favorite works for the franchise was in the TV series Virtua Fighter Animation, where he wrote and sang “Ai ga Tarinaize” (translates to “Love is Not Enough”). Used in the second opening, the song was Takenobu’s boldest work at the time. Although only the first season was ever translated into English, the song remains a fan-favorite the world over and has been included in each of his personal albums.

Although the base games of Virtua Fighter 4 and 5 did not include Mitsuyoshi’s music, he would return to make a successor to “Ai ga Tarinaize” for the arcade-exclusive Virtua Fighter 5 R, titled “Ai wa Tsuienai” (translates to “Love Will Never Be Wasted”). Similar in theme and execution, it quickly became a favorite in the game’s community. Those able to beat Dural in the home console release of Virtua Fighter 5 Final Showdown will unlock a hidden ending that features the song. A MIDI rendition of “Ai wa Tsuienai” also plays for Akira Yuki and Pai Chan in the incredibly large cross-company RPG release Project X Zone on Nintendo 3DS, which features several characters from SEGA, Bandai Namco and Capcom.

Known for his highly praised work on many AM2 and other SEGA releases by now, Mitsuyoshi was asked specifically by Yu Suzuki to create original songs for his upcoming project, known at the time as Virtua Fighter RPG, in the mid ’90s. The concepts and the meetings all took up a large portion of his career at the time, but he was ecstatic to see what would finally evolve into Shenmue.

When given explanations of the scenery, setting and story plans, Takenobu wrote dozens of concepts and ideas he had for much of the music. He worked specifically hard on concepts for the main theme, which was selected and is now considered one of the most treasured in the medium.

Shenmue reportedly cost $70 million, which even to this day, is considered extremely risky for even the biggest companies with the deepest pockets – which SEGA certain was nowhere close to being. The game sold well but did not even begin to earn most of its money back. Not surprisingly, everyone at SEGA was devastated that the project that they all had worked on for more than five years had been one of the largest factors in what almost made the whole company disappear forever.

Today, Shenmue is one of the most cherished video games of all time and also enjoys one of the most devoted followings. It remains one of Mitsuyoshi’s favorite projects, even if many of the songs he made for it are from sections of the game the player never needs to actually visit to complete the game. 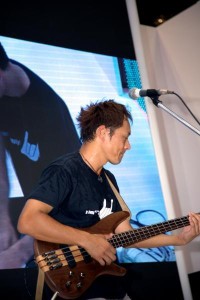 In 2003, Mitsuyoshi’s music from Shenmue was performed live at the first Symphonic Game Music Concert in Leipzig, Germany. Four years later, his music from the World Club Champion Football series was presented at the fifth event.

For Symphonic Shades – Huelsbeck in Concert, performed by the WDR Radio Orchestra in Cologne, Germany, Mitsuyoshi arranged music from Apidya II, composed by Chris Huelsbeck (best known for his work on the Turrican game soundtracks); it was the first live radio broadcast of a video game music concert in history.

Mitsuyoshi has released several of his own albums. The first, 2003’s From Loud 2 Low was released exclusively on SEGADirect (SEGA’s own online store), but was such a hit that a special version was released in greatly increased numbers, titled From Loud 2 Low Too. Both releases have songs from Virtual-On: Cyber Troopers, Burning Rangers, Daytona USA and Shenmue and Space Channel 5 Part 2, among others. Any major SEGA fan should consider looking them up.

In 2003, Capcom commissioned multiple game companies to get their best musicians to work on the Street Fighter Tribute Album. SEGA handpicked Mitsuyoshi to work on Ryu’s stage theme and even make original lyrics in English. However, Takenobu has a very rough understanding of the English language, so the song doesn’t make a lot of sense, but it remains a fan favorite regardless.

In 2012, downloadable content based on Daytona USA was developed for rival company’s Ridge Racer on the PlayStation Vita. The iconic Hornet car is playable in this, along with a new song by Mitsuyoshi based on the song “Let’s Go Away” with new lyrics themed around the Ridge Racer brand itself. Though certainly a monumental occasion for fans of both franchises, this downloadable content was exclusive to Japan.

The long-delayed Japanese version of Sonic & All-Stars Racing Transformed features Mitsuyoshi himself as the “Voice of SEGA,” replacing the anonymous announcer of the game released in other regions. He brings much more enthusiasm to the game with his trademark personality, making many of his worldwide fans disappointed that downloadable content of his voice is unlikely. 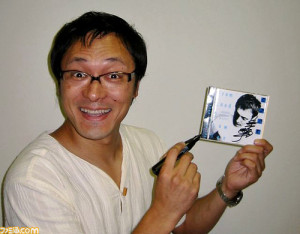 Mitsuyoshi is a man who deserves respect, but asks for none. He has been known to go out of his way to take any kind of weird random request his fans have asked just to see them smile. He has helped shape music in the video game industry into what it is today, and there is no hint of him ever slowing down, even being the family man he is today.

He has worked together with SEGA almost all of his adult life and is just as passionate about the medium as he was in high school. Takenobu has been apart of some of SEGA’s most praised titles (like Virtua Fighter 2), and some of their most scorned (like Sonic the Hedgehog 06), the fact remains that all of his work is always of a certain quality and a certain style that could never be confused with anyone else. He is a true genius and innovator of the industry, a true legend.

For a complete look at his entire discography click here! 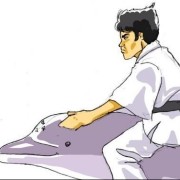